Let the beach battle commence! Would you choose this £695,000 flat in Tenby in Pembrokeshire or a £550,000 flat in Cornwall’s Carbis Bay?

Homes near the beach are all the rage as people seek life away from urban areas amid the pandemic and Britons flock to holiday spots in the UK.

If you did fancy a luxury bolthole overlooking the British coast and had plenty of money to spare – something that popular seaside locations often require – what could you get?

We take a look at two flats: one costs £695,000 in the desirable area of Tenby in Pembrokeshire, and the other costs £550,000 in Cornwall’s Carbis Bay, which was the destination of the recent G7 summit.

Which of the two homes for sale, listed on property on property website Zoopla, would you choose? 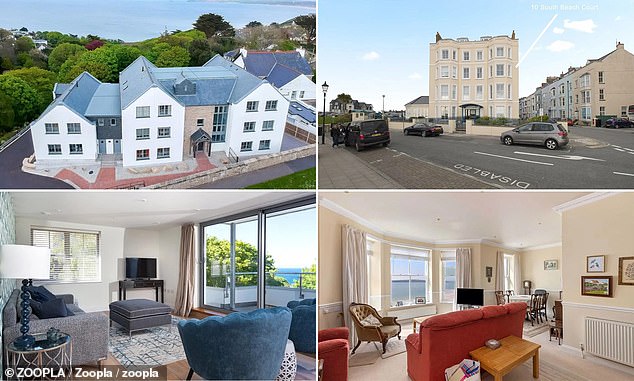 Which would you choose: A two-bed in Cornwall (left) or a three-bed in Pembrokeshire (right) 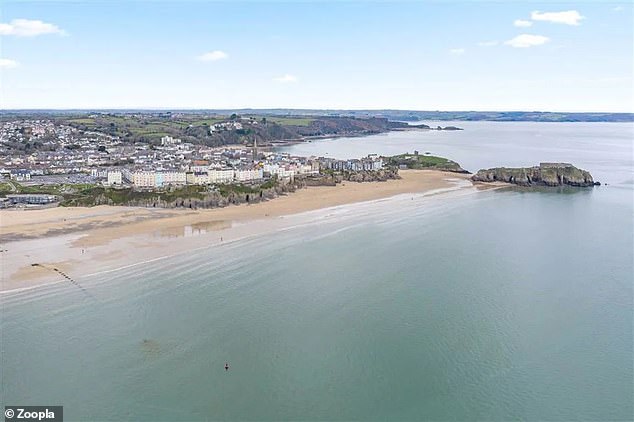 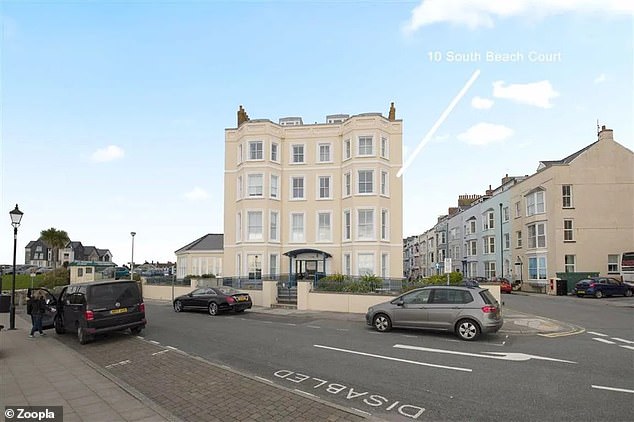 The flat in Pembrokeshire’s Tenby is on the market for £695,000 via estate agents Birt & Co 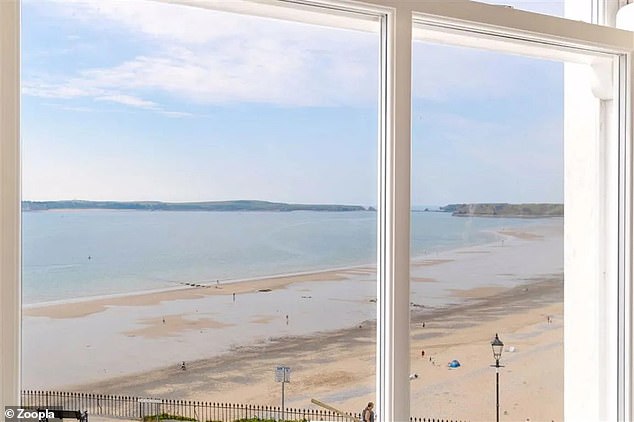 The first property is a three-bedroom flat in a seafront development in Tenby, Pembrokeshire.

Pembrokeshire has become a popular destination this year among holidaymakers, as they shun traditionally more crowded streets in Cornwall amid the pandemic.

The flat is on the outskirts of the harbour town of Tenby, a resort in south west Wales. It boasts sea views of sandy stretches of South Beach and Caldey Island.

It is on the market via estate agents Birt & Co with an asking price of £695,000. The bumper price tag reflects its size, being in what is described as an ‘exclusive development’ and seafront location.

North London estate agent Jeremy Leaf said: ‘We are hearing that Pembrokeshire is one of the favoured destinations for Londoners looking to move out of the capital for good, or as a destination for a second home to complement city living.

‘After living in such a built-up environment, views of the open sea could not be more different and are certainly up there on the wish list for aspirational Londoners.’ 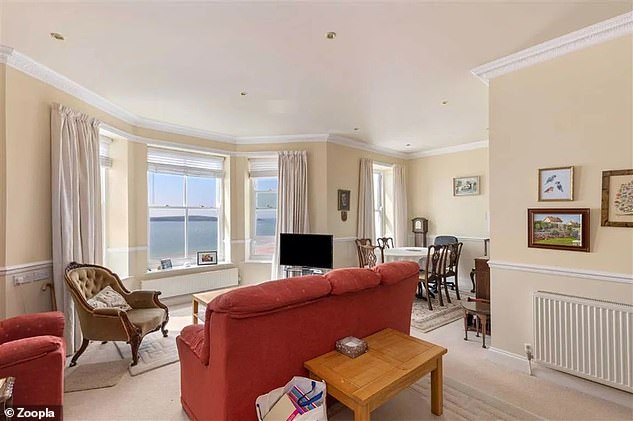 The apartment is on the outskirts of the harbour town of Tenby, a resort in south west Wales 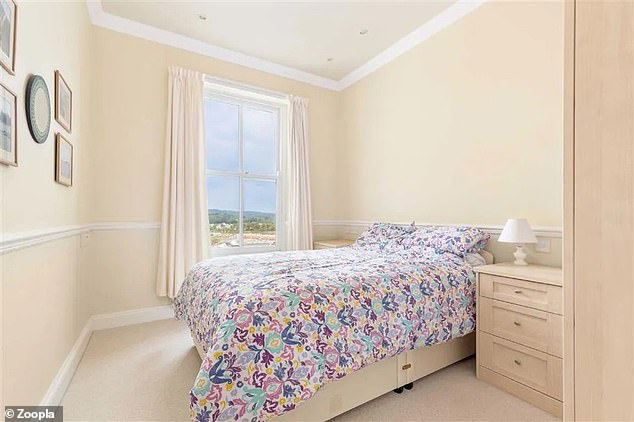 The second property is a two-bedroom luxury flat in Carbis Bay, which is a village neighbouring the popular harbour town of St Ives an recently hit the headlines when it hosted the G7 meeting of international leaders.

Carbis Bay was developed around Carbis Bay beach, which has views from St Ives harbour to Godrevy Lighthouse and Hayle Towans.

The flat has an open-plan living area and a spacious patio style terrace with sea views. It is being sold by Bradleys estate agents for £550,000.

Tom Parker, of Zoopla, enthused: ‘This apartment is located in one of the most stunning coastal locations in Britain, with miles of golden beaches and easy access to popular towns including St Ives right on its doorstep.

‘To make the most of its enviable location, the property boasts sea views and a large patio terrace, perfect for soaking up the summer sun.’ 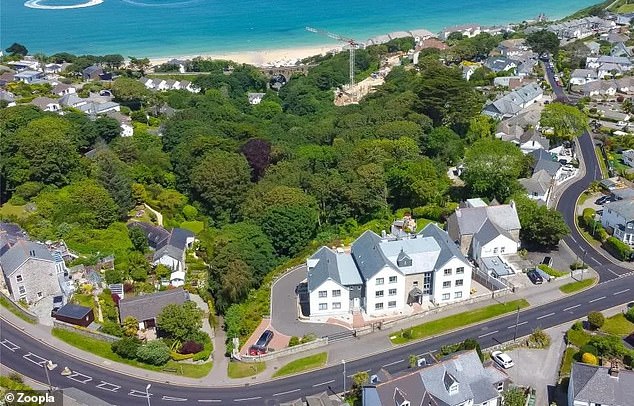 The luxury flat is in Carbis Bay, which is a village neighbouring the harbour town of St Ives 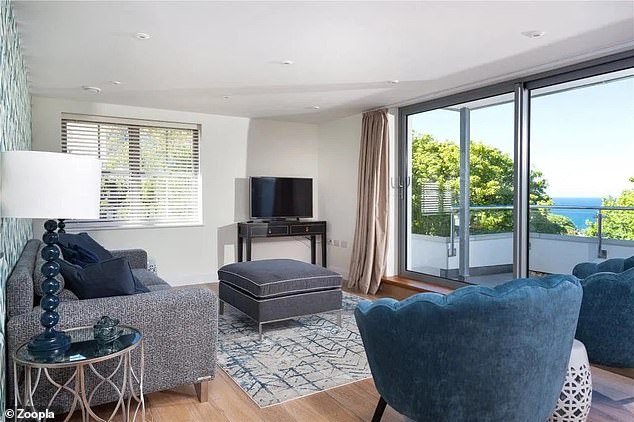 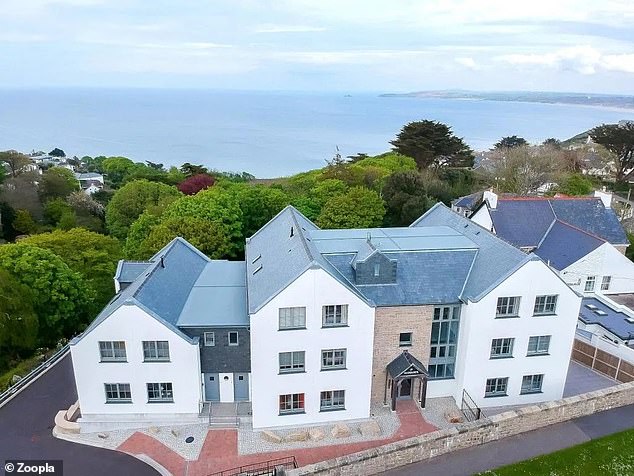 The property is on the market for £550,000 and is being sold by Bradleys estate agents 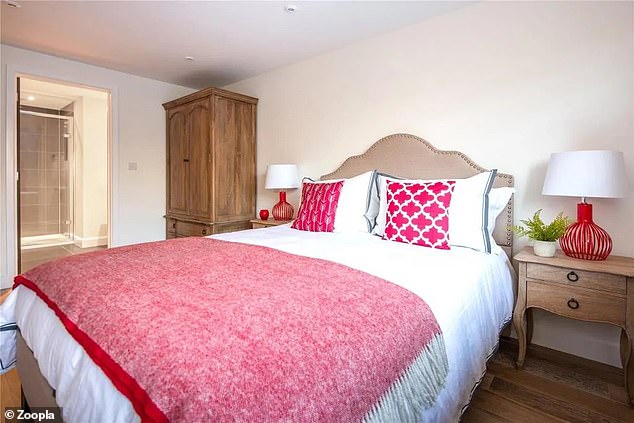 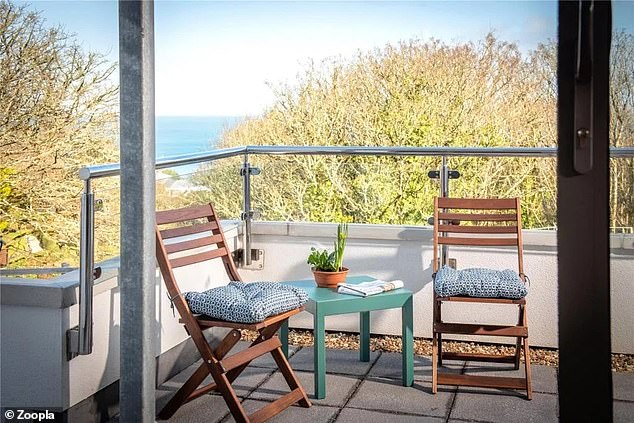 Time to relax: The property has easy access to the areas’s golden beaches, which can be seen from the terrace