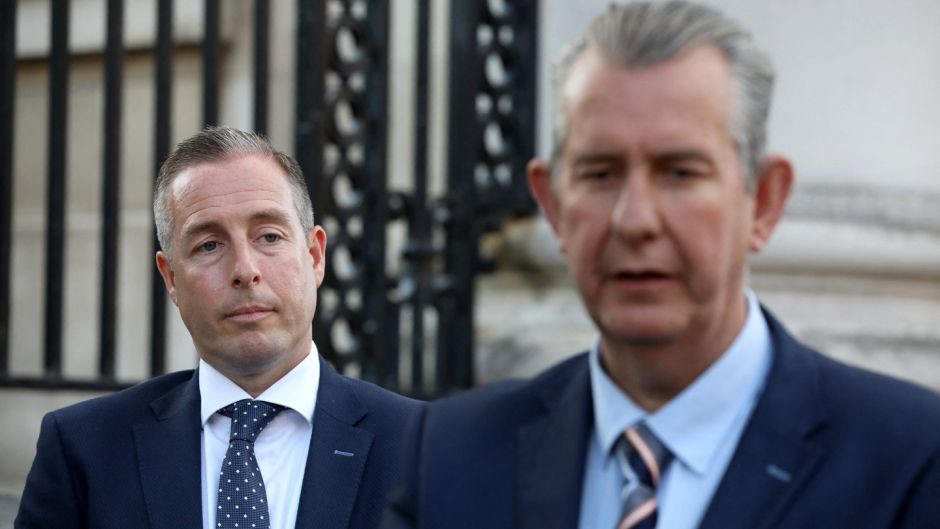 Paul Givan and Edwin Poots go way back. These days, they are the DUP’s representatives for Lagan Valley in the Stormont Assembly – and, in Poots’s case, the party’s new leader.

However, they have been part of the same team for roughly 20 years, ever since Givan (39) began working for him as a part-time assistant while a student. Now the partnership is set to conquer the summit of Northern Irish politics.

Givan is widely tipped as the most likely to succeed Arlene Foster as First Minister; illustrated by Poots’s choice to bring him with him to Dublin on Thursday for his meeting with Taoiseach Micheál Martin.

In an interview with BBC Radio Ulster earlier that day, Givan declined to be drawn on his potential promotion, saying instead that the choice of the next First Minister was “a matter for Edwin”.

However, should he be offered the job, he would not say no. “I haven’t asked for anything and I haven’t been asked to do anything at this stage,” the MLA said.

“What I have made clear to Edwin is, if he sees me having a role to be able to serve the party and to serve the country, I’ve never shirked away from taking on that responsibility,” he added.

Certainly his CV bears this out. Givan, who is from Lisburn in Co Antrim, has a degree in business studies from Ulster University and began working for Poots full time in 2003.

The former DUP special adviser Tim Cairns remembers how he stood out “as the most confident, the most clued-in” of all the young graduates in the party at the time – “someone who would probably do well in elected politics”.

In 2010 Givan was co-opted into the Assembly, where he has been a committee chairman – most notably of the Justice Committee – and was briefly minister for communities from 2016 until the Assembly collapsed in 2017.

His colleague Jim Wells, also an MLA, describes Givan as “very capable … the most capable person we have at the minute who’s not a minister”, who was “always across “a very difficult and technical brief” as chairman of Stormont’s Justice Committee.

Summing him up as “a very clear speaker, good on detail, with a fair bit of experience”, Wells went on: “I’m not remotely surprised he was tipped as first minister. Nobody in the party has any raised eyebrows that his name is in the frame.”

Givan and Poots also share a similar background. Both are members of the Free Presbyterian church with a strong DUP pedigree; Poots’s father was a founder member, as were Givan’s grandfather and great-uncles.

Both of their fathers were targeted during the Troubles. The INLA tried to kill Poots’s father, Charlie, in 1976, while Givan’s father, Alan – a former prison officer in the Maze/Long Kesh and now a DUP councillor – received a hoax letter bomb from the IRA as he was about to leave for the hospital as his wife was about to have their first child.

Givan was inspired to enter politics after hearing Paisley speak at a rally against the Belfast Agreement. “He captured me emotionally for the DUP and Peter Robinson’s and Nigel Dodds’s forensic analysis of the failing of the agreement captured me intellectually,” he told the Belfast Telegraph.

Givan is married and has three young daughters. His religious beliefs are central to his identity, he says: “My faith determines my values; it’s intrinsic to who I am. I am a Christian, first and foremost, a husband, a father, a unionist.”

This was evidenced in 2014, when he attempted to introduce a “conscience clause” into Northern Ireland’s equality legislation following the so-called “gay cake” row, in which the Equality Commission took a civil action against a Christian-owned bakery after it refused to bake a cake with a pro-gay marriage slogan.

His Private Members’ Bill aimed to create a legal exemption for strongly held religious belief. This in his view would rebalance a law under which “gay rights, and the right to have those rights endorsed and promoted by everyone [were viewed as] more important than the rights of Christians to live according to their conscience,” he said.

This year, he tabled a Private Members’ Bill – the first legislative challenge to the North’s recently introduced abortion laws – which would repeal a clause allowing terminations up to birth in cases of serious non-fatal disabilities.

In Stormont he is regarded as sharp and capable and unafraid of robust exchanges in the Assembly, or indeed with ministers – “very capable of battling”, as one senior source put it.

During a Brexit debate September 2020, Givan described the Northern Ireland protocol as “an instrument to punish the people here in Northern Ireland, the United Kingdom” which he said was “being exploited by the European Union and our predatory neighbour in the Irish Republic”.

Responding to Sinn Féin’s Martina Anderson, he said the motion “was all about the all-Ireland agenda that the member spoke about … about the reunification of this island”.

This forthright style may stand him in good stead; he will be aware of the pitfalls of splitting the roles of party leader and First Minister. If appointed he will be conscious of the need to avoid being seen as the junior partner.

Yet his previous ministerial tenure is chiefly remembered for the withdrawal of the Líofa bursary scheme – which allowed young people to attend Irish classes in the Donegal Gaeltacht – in an email just before Christmas 2016.

That move was condemned by the president of Comhaltas Uladh as a “blatant act of discrimination”.

Though the decision was later reversed, by this time the powersharing Assembly had fallen after the resignation of the then deputy first minister, the late Martin McGuinness, who said Givan’s action was partly to blame – a charge Givan rejects, saying the move was “not a political decision”.

Now, the Irish language is a pressure point again, with an Irish-language act agreed as part of the New Decade, New Approach agreement in 2020, but which has been struck since.

“There aren’t many within the DUP who I could say would be a good choice, or that I could say I could prefer one over the other,” says Irish-language activist Ciarán Mac Giolla Bhéin. “In terms of the Irish language, there isn’t anyone there.”

Though he stresses the choice of First Minister is a matter for the party, “what I would say is they have to honour the commitments made in New Decade, New Approach that the DUP as a party signed up to.”

In the meantime, the wait continues for Poots’s announcement; for the SDLP leader Colum Eastwood, judgment must be reserved until the first minister is in office. Yet of Givan he says: “He may be somebody who we can do business with.”

White People and Their Achievements Are Marked for Destruction