A two-bedroom flat located in a country mansion which bears more than a passing resemblance to the White house has gone on sale for £2million south London.

The Mansion at Sundridge Park near Bromley, is now on the market with Knight Frank.

Sundridge Park mansion has been restored and turned into 22 apartments. Six of the flats are on sale and the one which costs £2million is a two-bedroom duplex with ‘impressive’ original features.

The building is based on the design of a Renaissance temple and is set within sweeping gardens that are around 12 miles south of Charing Cross. 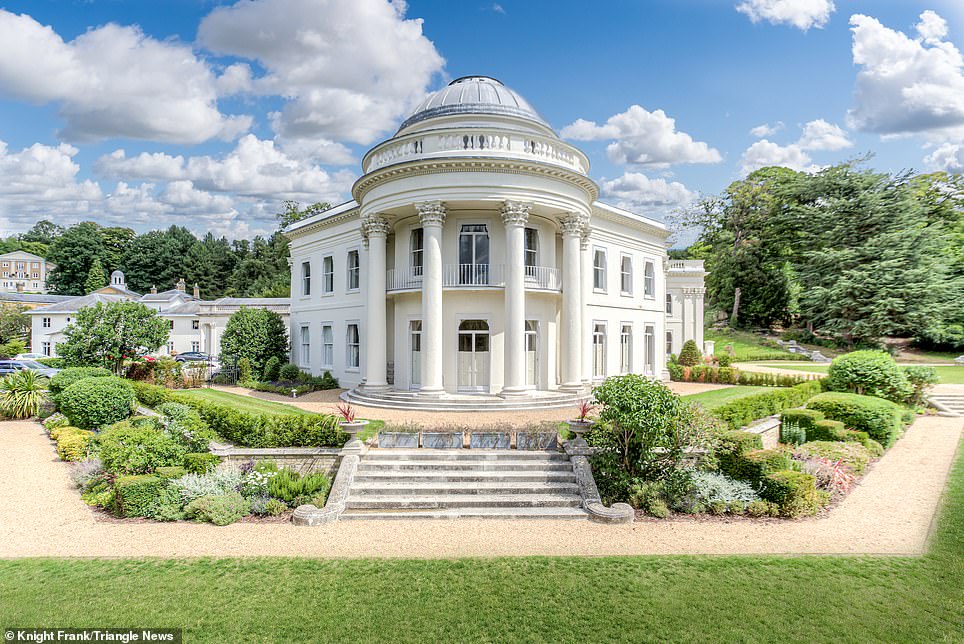 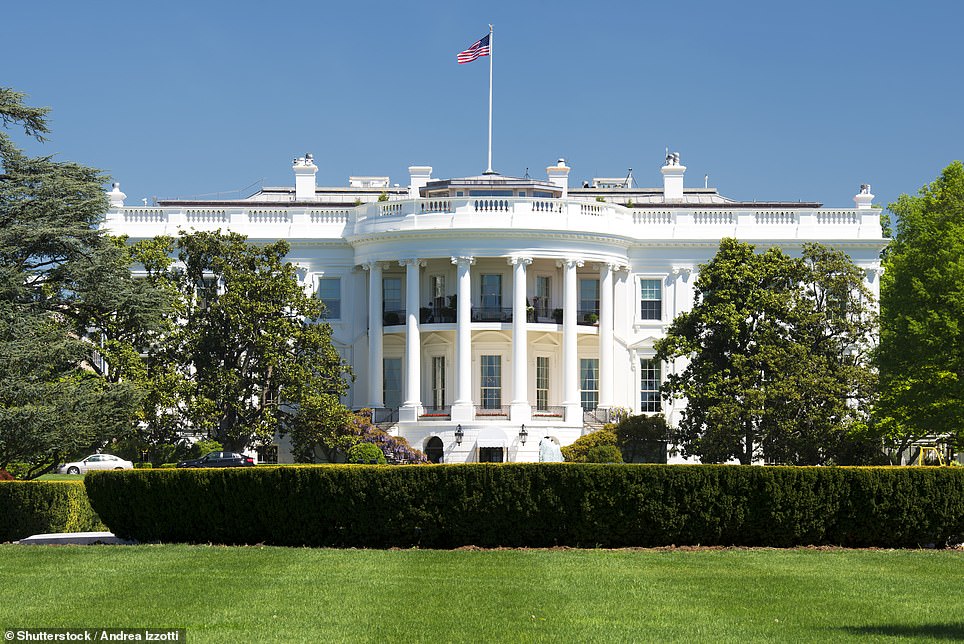 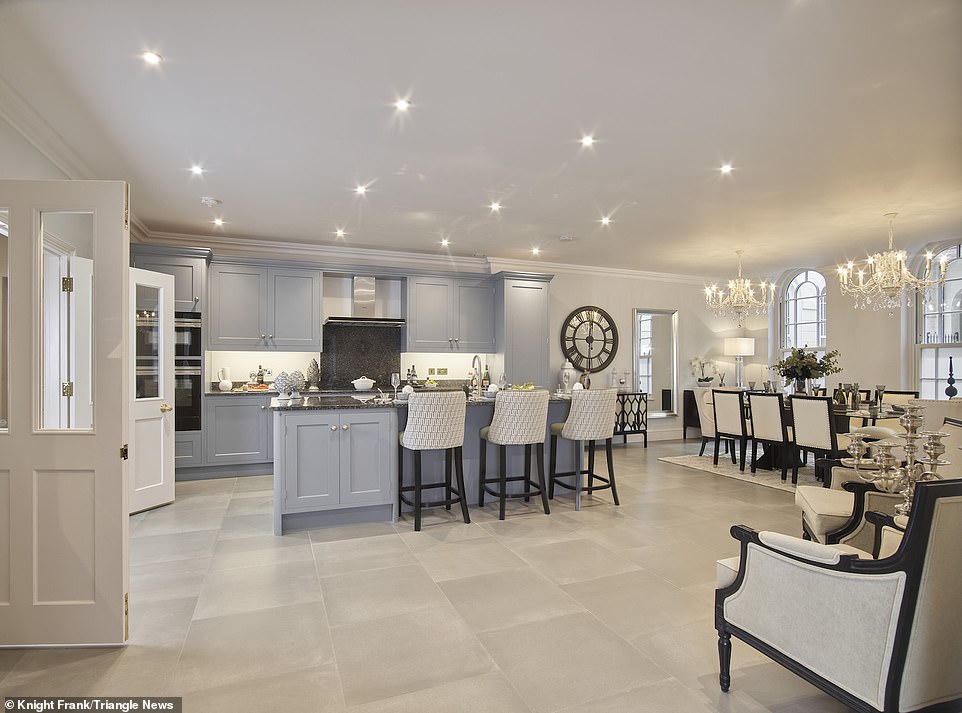 The Mansion at Sundridge Park near Bromley, south London, is on the market with Knight Frank 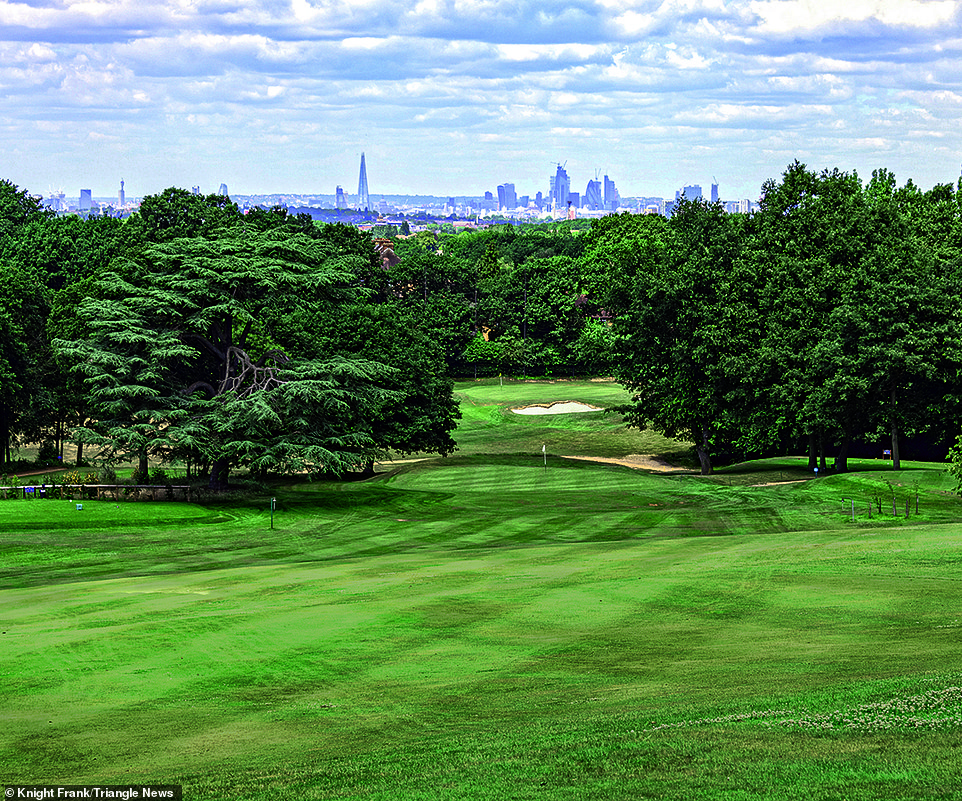 Sundridge Park mansion has been restored and turned into 22 apartments. The only on sale is a two-bedroom duplex with ‘impressive’ original features

A listing by estate agents Knight Frank reads: ‘The Mansion at Sundridge Park is an exquisite country house fashioned in the form of a Renaissance temple and set within a sweeping landscape of sculptured gardens and woodland walks.

‘This two-bedroom duplex has many impressive original features and benefits from two terraces and access to delightful gardens and woodland.

‘The exceptional drawing room, with three sets of French doors on to one of the apartment’s terraces, has an array of original features including restored shutters and windows, beautiful ceilings with ornate plasterwork, restored wall panelling and an impressive oak fireplace with decorative surround.’ 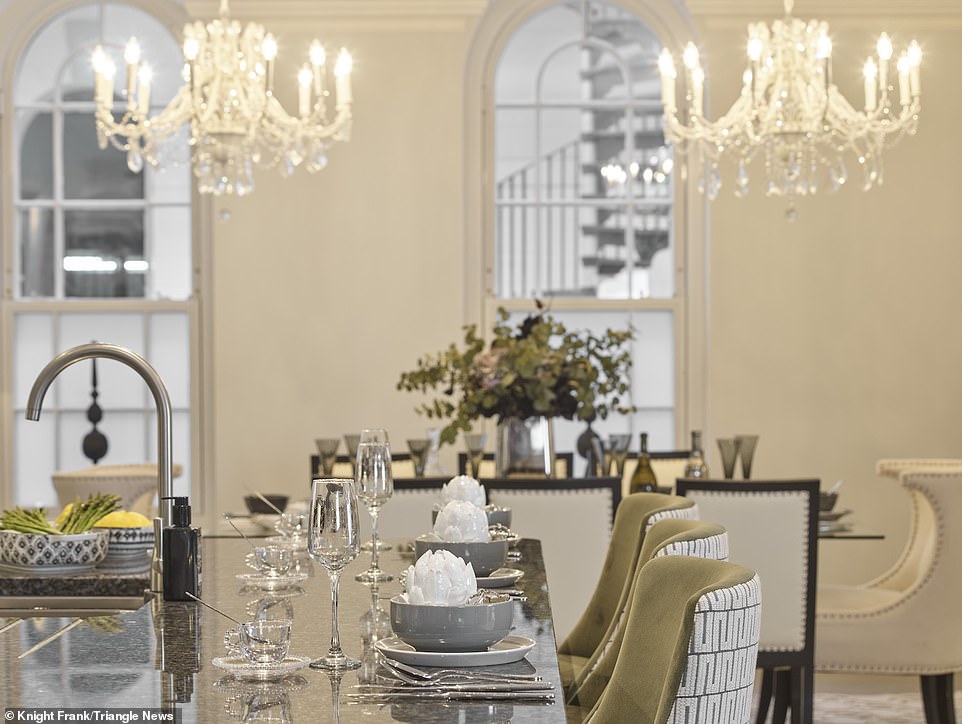 The building is based on the design of a Renaissance temple and is set within sweeping gardens that are around 12 miles south of Charing Cross. The duplex features an open plan kitchen and dining room 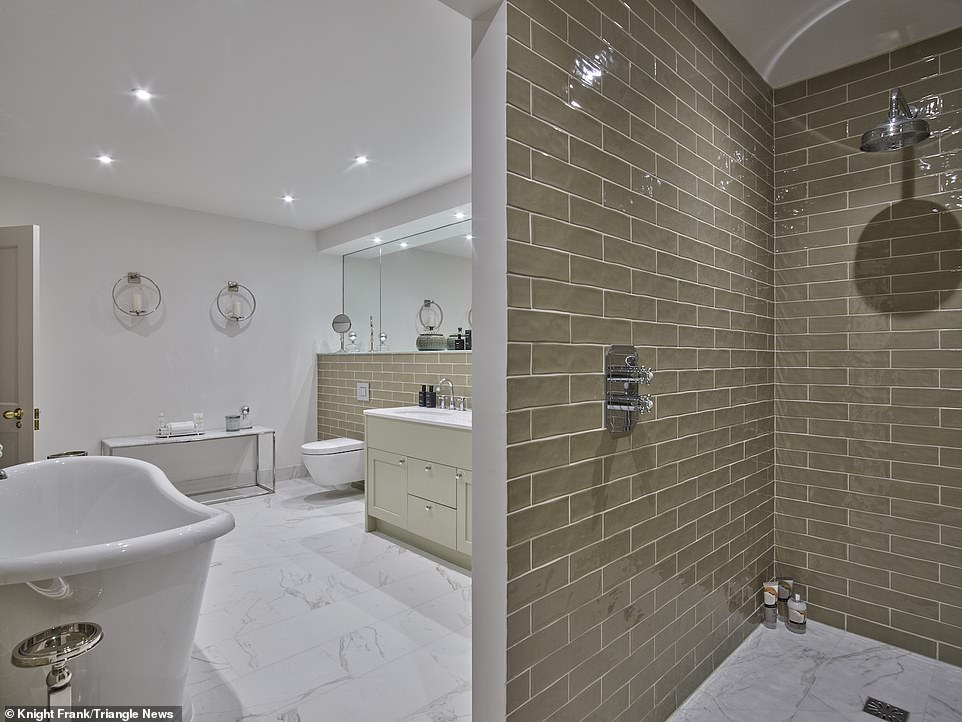 A listing by estate agents Knight Frank reads: ‘The Mansion at Sundridge Park is an exquisite country house fashioned in the form of a Renaissance temple and set within a sweeping landscape of sculptured gardens and woodland walks’. There is also a large dressing room and an en-suite with free standing bath and a large walk in shower 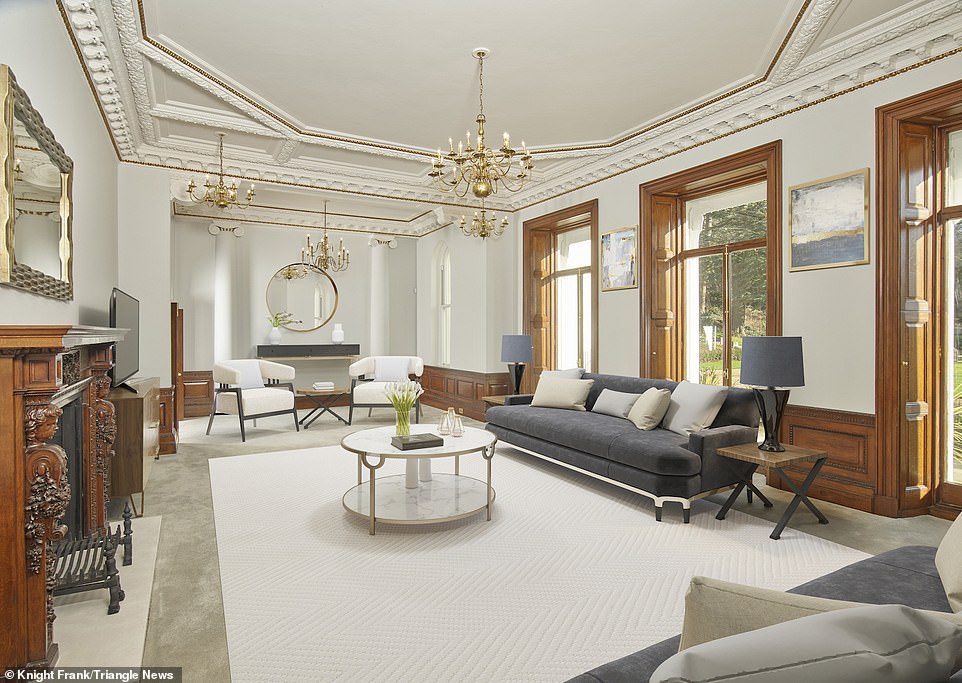 All of the apartments have either two or three bedrooms and one of the £900,000 ones features a circular balcony with panoramic views across the golf course.

Kitchen is appointed with integrated Siemens appliances, stone worktops and bathrooms with fittings from Villeroy & Boch and Crosswater.

The more expensive apartments feature their own private terraces and have private entrances at the side of the mansion.

The apartment also features an open-plan kitchen with views of a courtyard, a cloakroom, and private terraces.

There is also a large dressing room and an en-suite with free standing bath and a large walk in shower.

Pictures show the incredible original wine cellar and there is also a pantry and double garage. 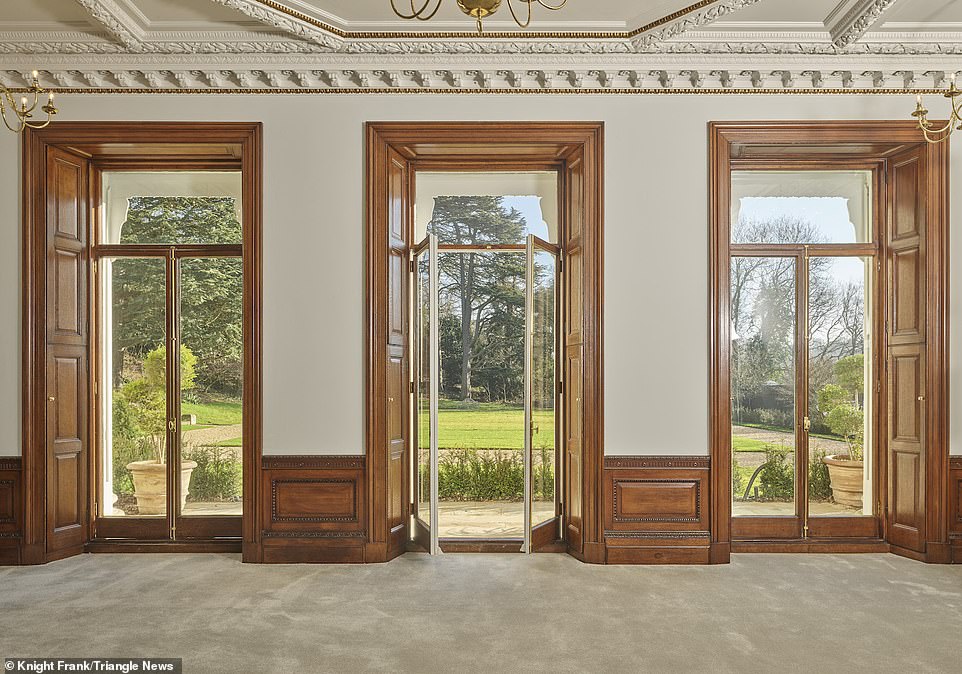 The apartment also features an open-plan kitchen with views of a courtyard, a cloakroom, and private terraces 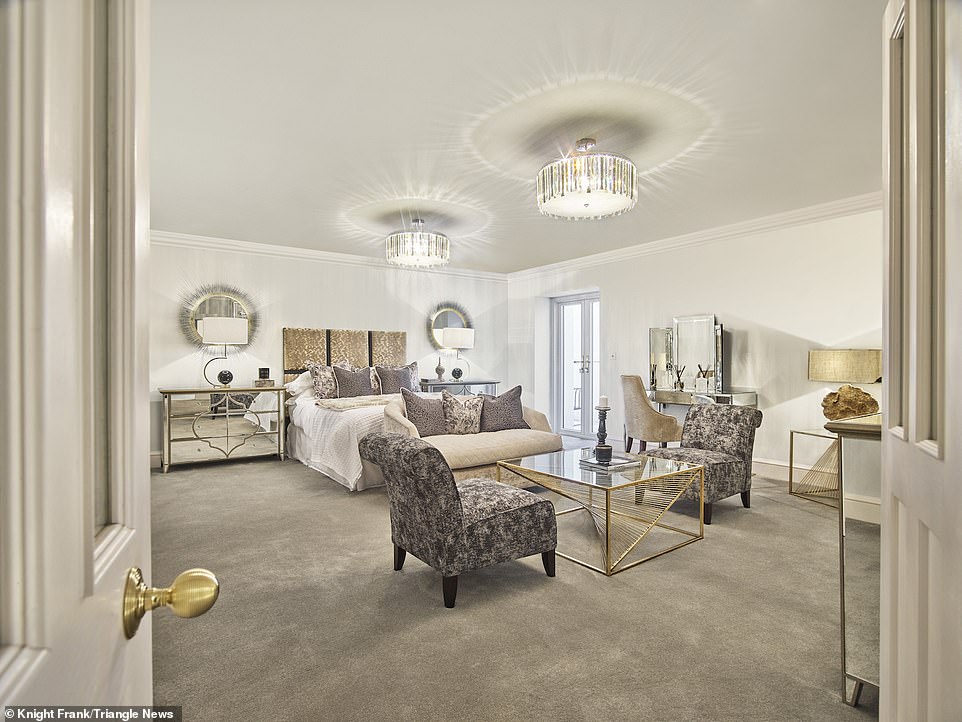 The listing goes on: ‘The Mansion is the ultimate address for keen golfers looking to be just minutes from the clubhouse and also provides a peaceful surrounding oasis of almost 300 acres with spectacular views.’

The US White House lies on Capitol Hill in Washington DC and has been used by every president since John Adams in 1800.

The residence was designed by Irish-born architect James Hoban in a neoclassical style and was modelled on Leinster House in Dublin.

The White House was designed by Irish architect James Hoban in a neoclassical style. It was modelled on Leinster House in Dublin which is the location of the Oireachtas (Irish legislature).

It is classed as a National Heritage Site owned by the National Park Service and is part of the President’s Park. 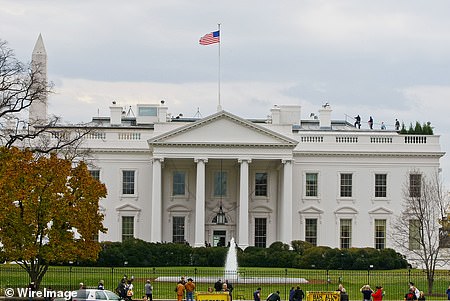 Work began on Hoban’s design in 1792 and wasn’t completed until 1800. When Thomas Jefferson moved in the next year he added low colonnades one each wing of the mansion.

During the War of 1812 the mansion was set on fire by the British Army and the interior was destroyed. Reconstruction took a few years and James Monroe was able to move into the home in 1817.

In 1948 the building’s load-bearing walls were found to be close to collapse. Harry S Truman ordered the interior rooms to be dismantled and rebuilt with an internal load-bearing steel frame.

He also added the Truman Balcony.

The Mansion at Sundridge Park: A refurbished Grade I home visited by Edward VII

The Mansion at Sundridge Park stands on grounds that were laid out by the 19-century landscape designer Humpthry Repton.

The house itself is a fully refurbished version of the Grade I-listed John Nash mansion where Edward VII attended shooting parties. 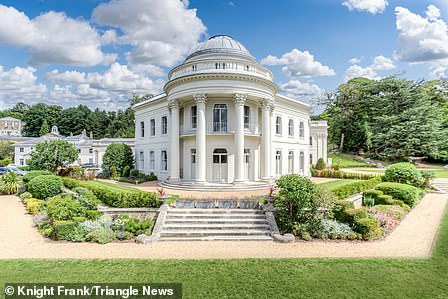 Wealthy London families have lived in the house since the 17th century.

Sir Claude Scott purchased that house in 1795 and demolished it on the advice of Humphry Repton, building the present mansion on an opposite slope and creating the park. The stuccoed stately home was designed by John Nash and the work was completed under the direction of Samuel Wyatt.

The park became a golf course, with a new clubhouse opened by prime minister Arthur James Balfour in 1903.

Sundridge Park mansion functioned as a luxury hotel until after World War II and became a management centre in 1956. A new block of residential accommodation was completed in 1970.

The grand staircase, plasterwork and 18th-century paintings have now been restored. The homes are reached via the estate’s lodge entrance and a half-mile drive beside the fairways.

Essential travellers should be exempted from hotel quarantine in Ireland, says EU

If you like toilet humour, you’ll love Brian and Domhnall Gleeson’s new comedy