If you’ve always wanted to live in a castle but can quite afford to stretch to the typical seven-figure price tags, here’s an opportunity to potentially have your Royal cake and eat it.

A two-bedroom flat that is part of Scottish castle dating back to the fifteenth century is available to buy for a not so princely sum of £220,000.

It is a far cry from the usual multi-milllion price tag associated with turreted historic homes, but that’s because you would only be buying a section of the castle rather than the whole thing. 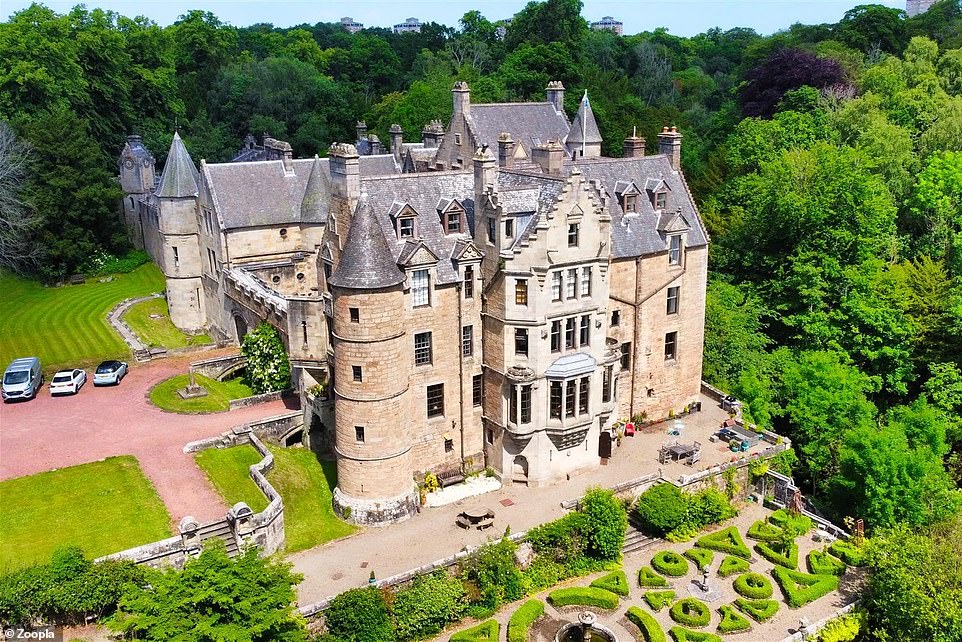 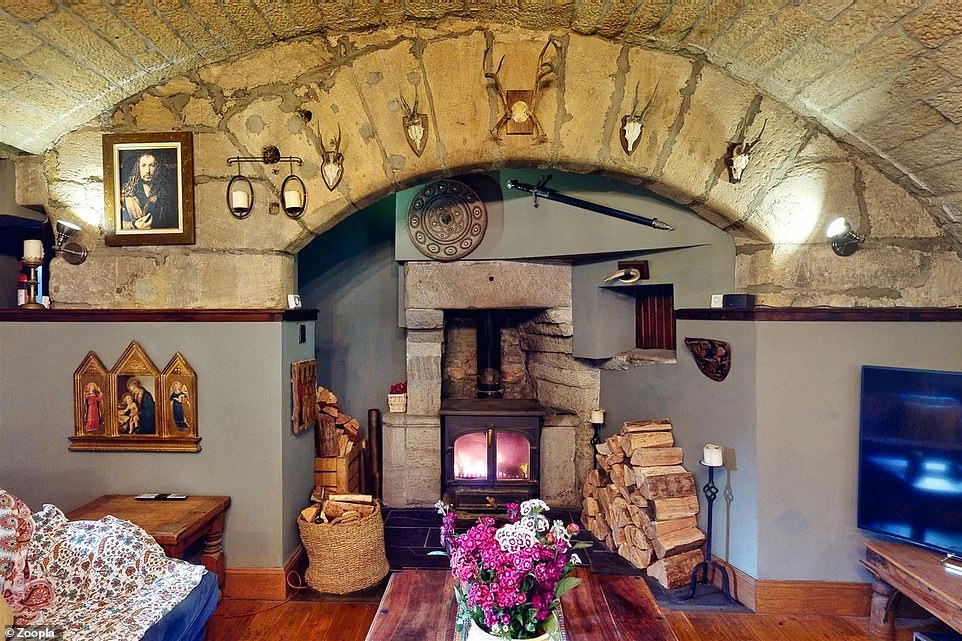 There is a wood-burning stove at one end of the main living space, which has been squeezed into the original stone fireplace

The scene is set with the flat’s own private entrance via a wooden door set in the thick stone walls of the castle.

But perhaps the most striking feature of the flat is its vast living area with a stone domed ceiling that runs its entire length.

There is a wood-burning stove at one end of the space that has been placed in the original stone fireplace.

The room has wood flooring and sufficient space to accommodate a seating area around the fire, a study area and a large dining table. 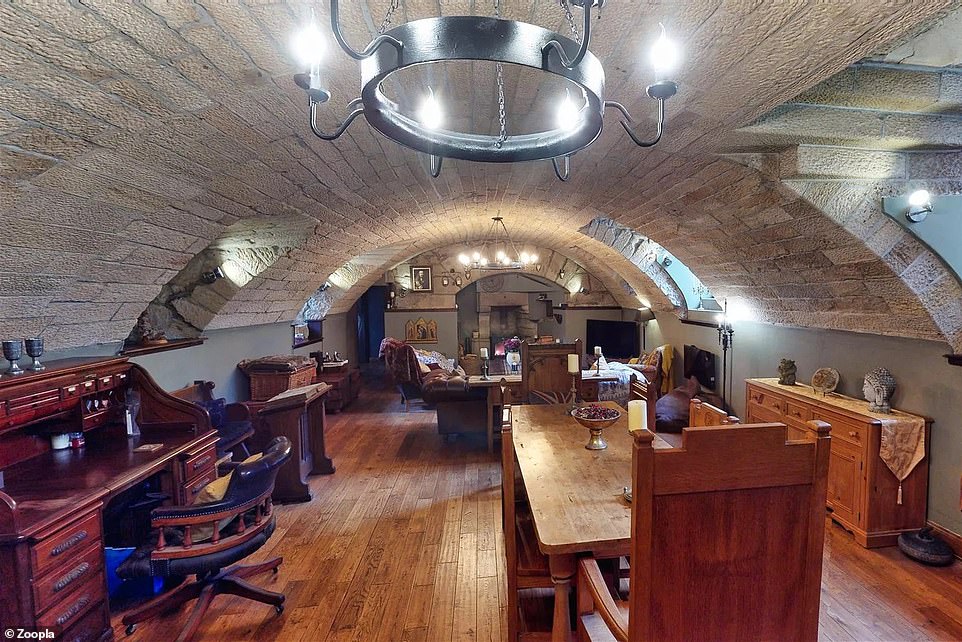 A property with a twist: The flat has a vast living area with a stunning stone domed ceiling that runs the entire length of the room 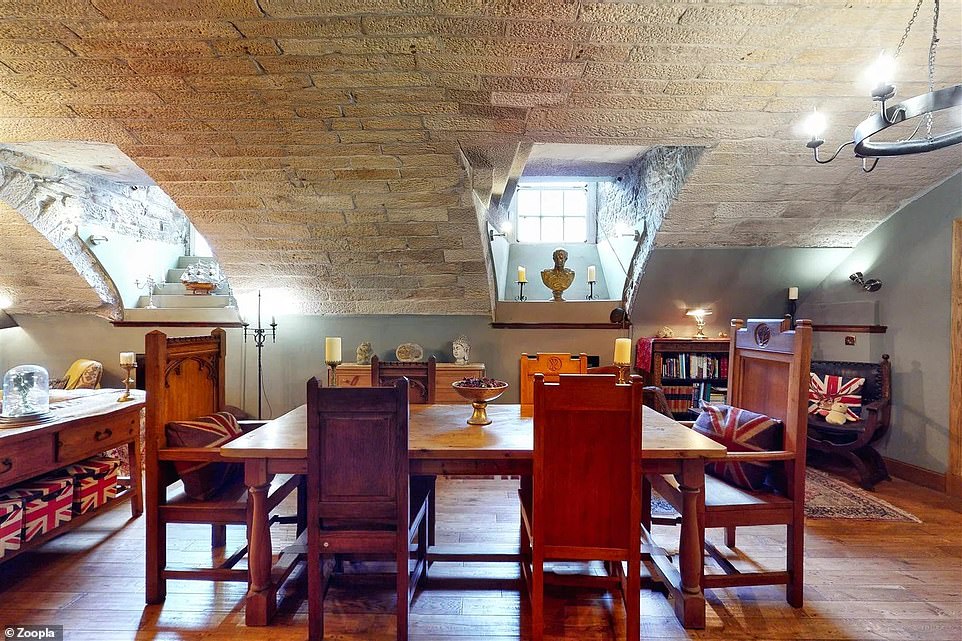 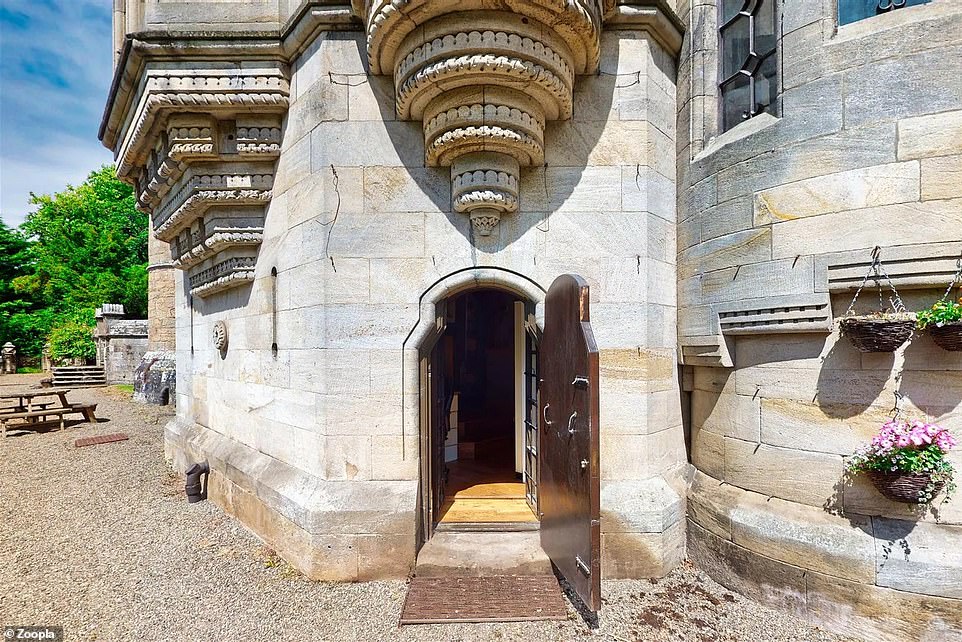 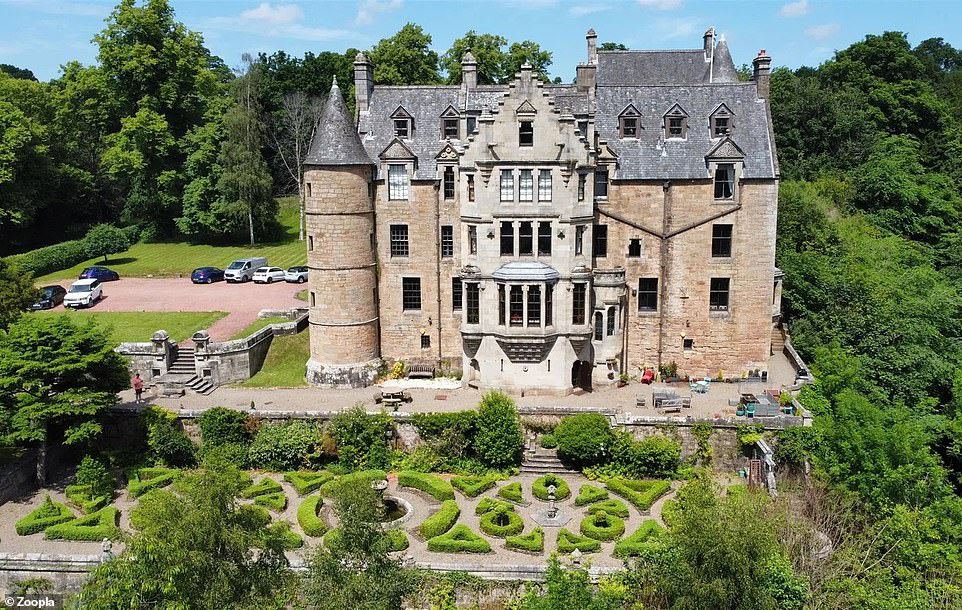 Outside, the flat has two allocated garages and has access to the extensive shared grounds that include a Japanese garden

The domed ceilings continue in not only in the main bedroom, but also in the shower room. The second bedroom is in one of the castle’s turrets.

While the kitchen has a standard flat ceiling, it has curved walls that wrap around white shaker style cabinets and a coloured stone worktop.

Outside, the flat has two allocated garages and has access to the extensive shared grounds that include a Japanese garden.

Tom Parker, of Zoopla, said: ‘This unique apartment is located in the fairytale surroundings of a former baronial castle, Dalzell House, amid the Barons Haugh nature reserve with its stunning woodland, waterfalls, Japanese garden and Italian style terrace.

‘The property itself also has some spectacular features including a bedroom located in the turret of the castle and a stone domed ceiling in the living area.’ 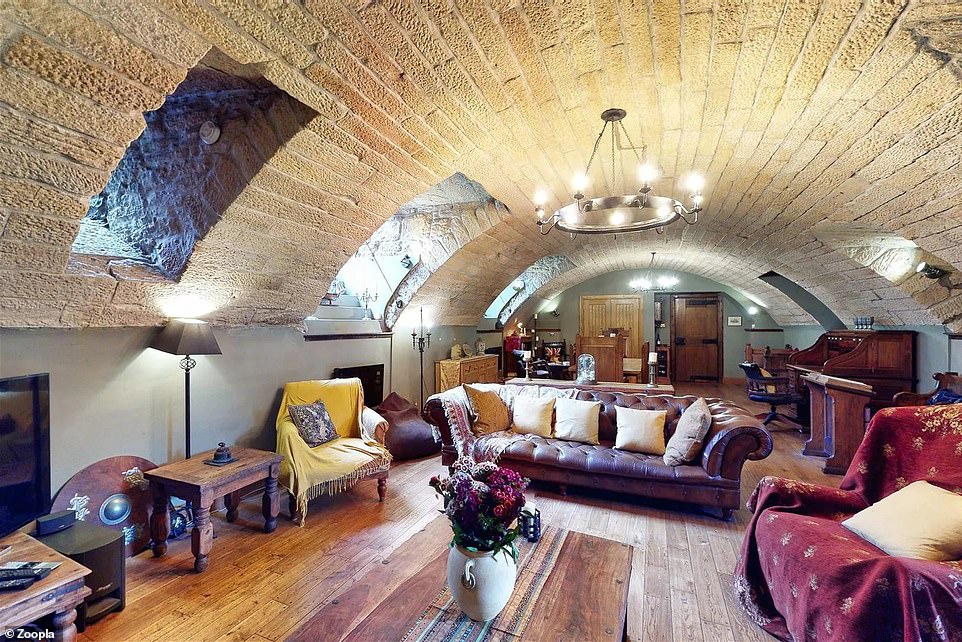 The usual living area has wooden flooring, painted walls, and a large chandelier hanging from the stone ceiling 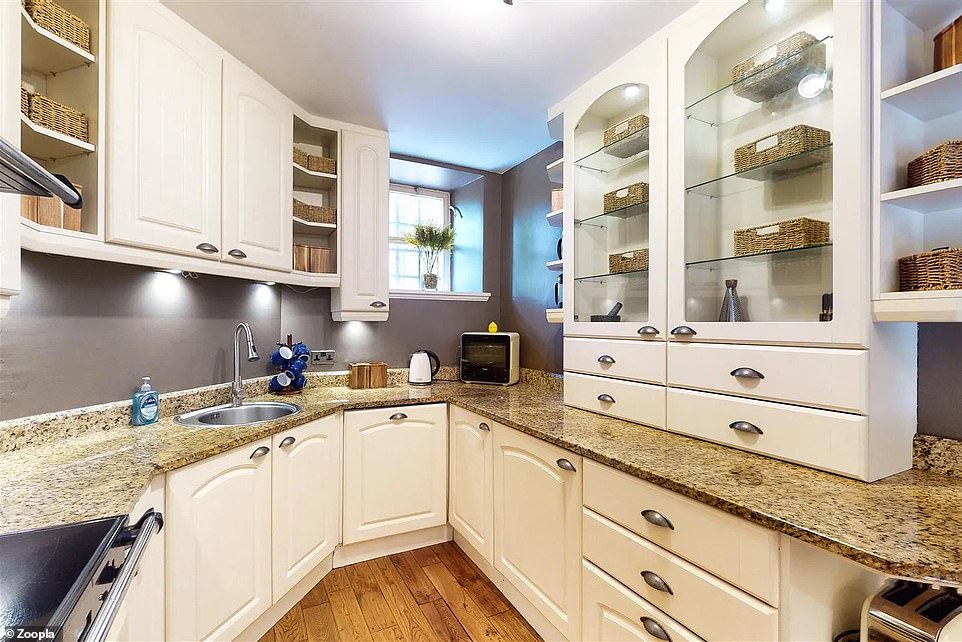 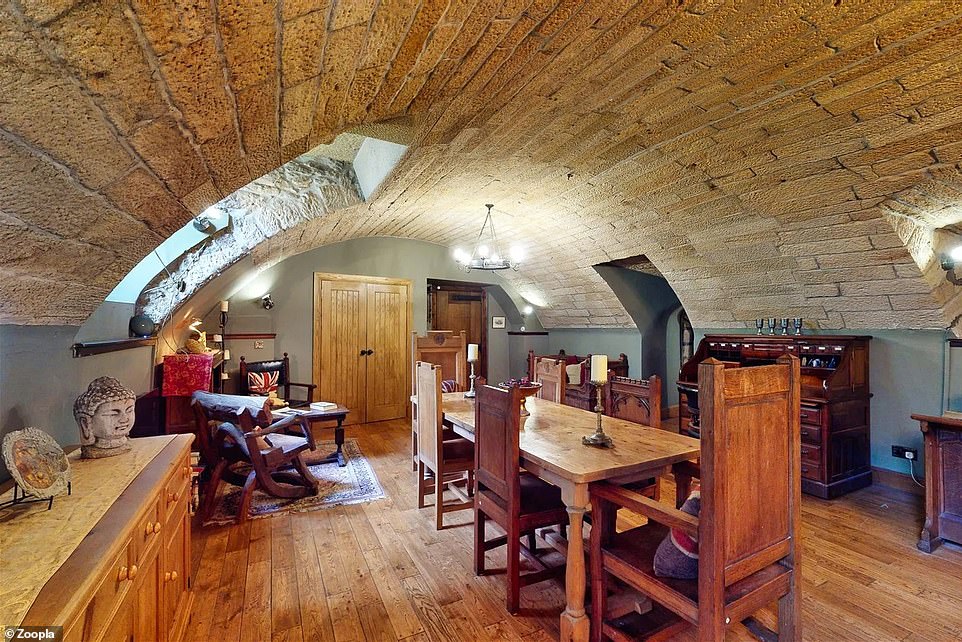 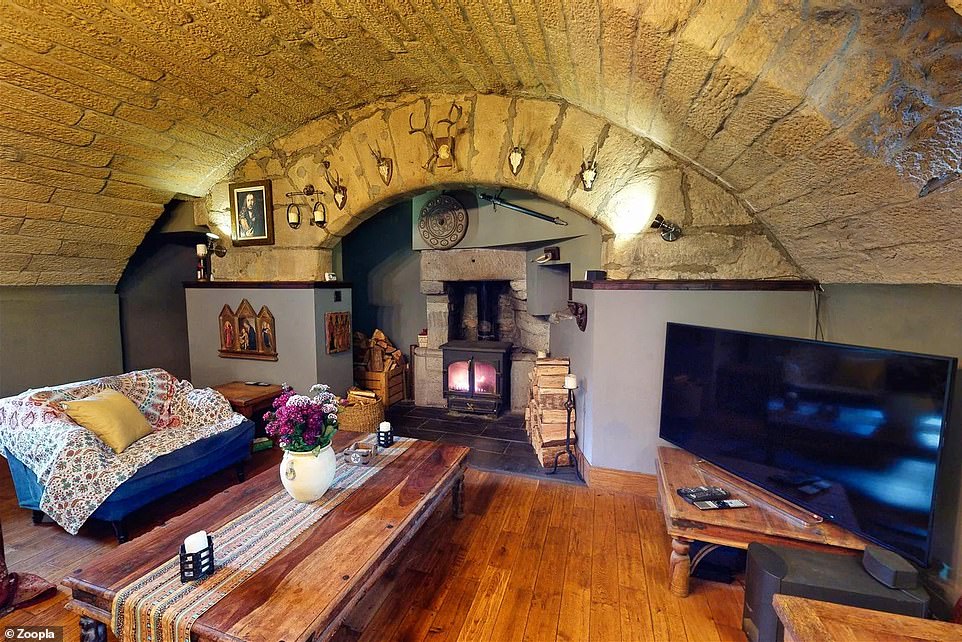 Relaxing with friends and family: The main living area has a seating area with a large coffee table and space for a large TV 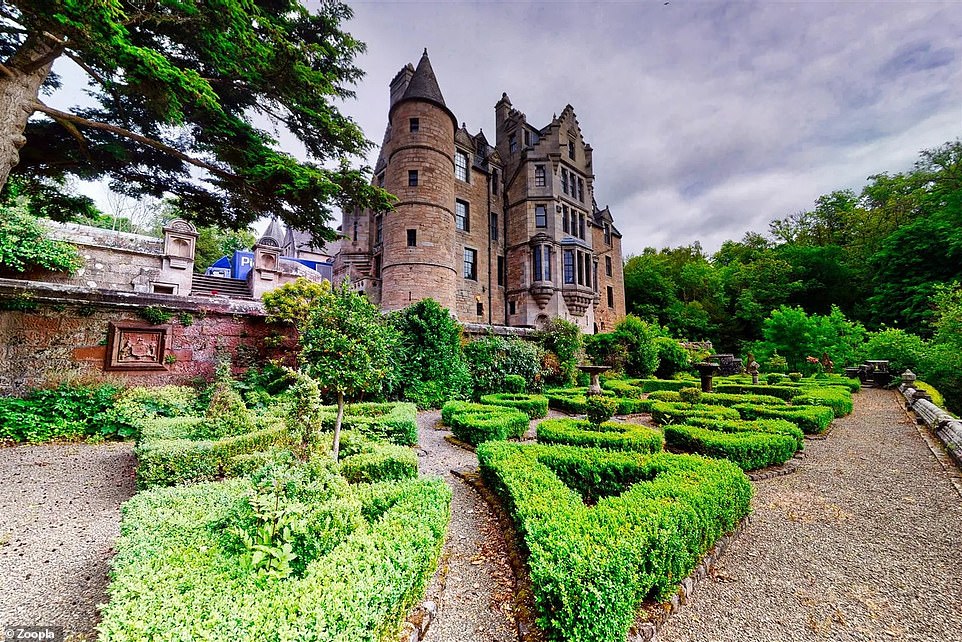 The flat is in the fairytale surroundings of a former baronial castle, in Motherwell, the fourth largest town in North Lanarkshire

The property is in Motherwell, the fourth largest town in North Lanarkshire, Scotland.

It has access to three railways stations offering a commute to Glasgow in as little as 12 minutes and to Edinburgh in 45 minutes.

There are six comprehensive schools in Motherwell and more than 20 primary schools.

The average price of a property in Motherwell is £164,739, compared to £341,117 for Britain, according to Zoopla.  The property is being sold via estate Upload Abode. 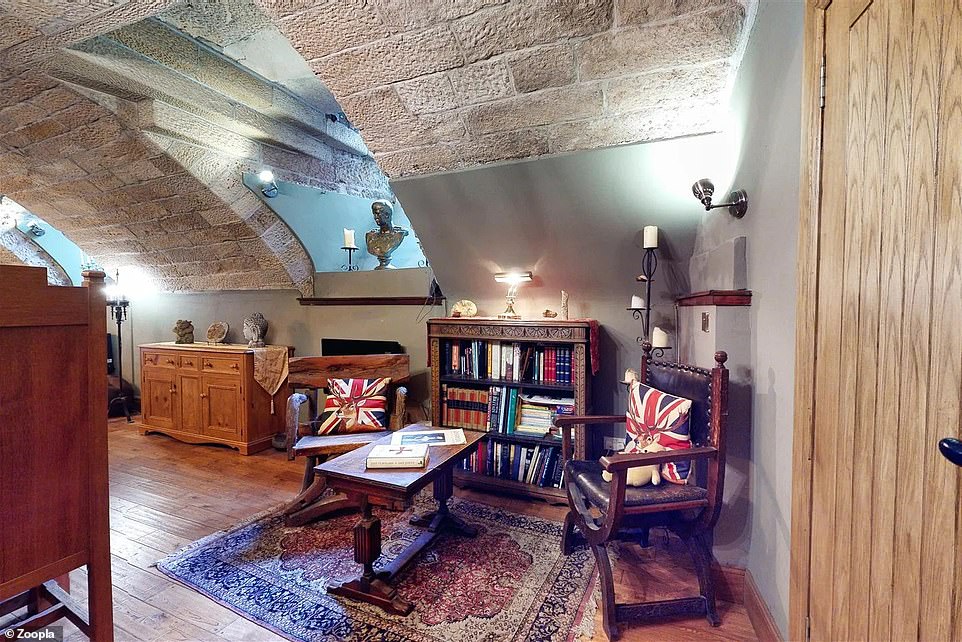 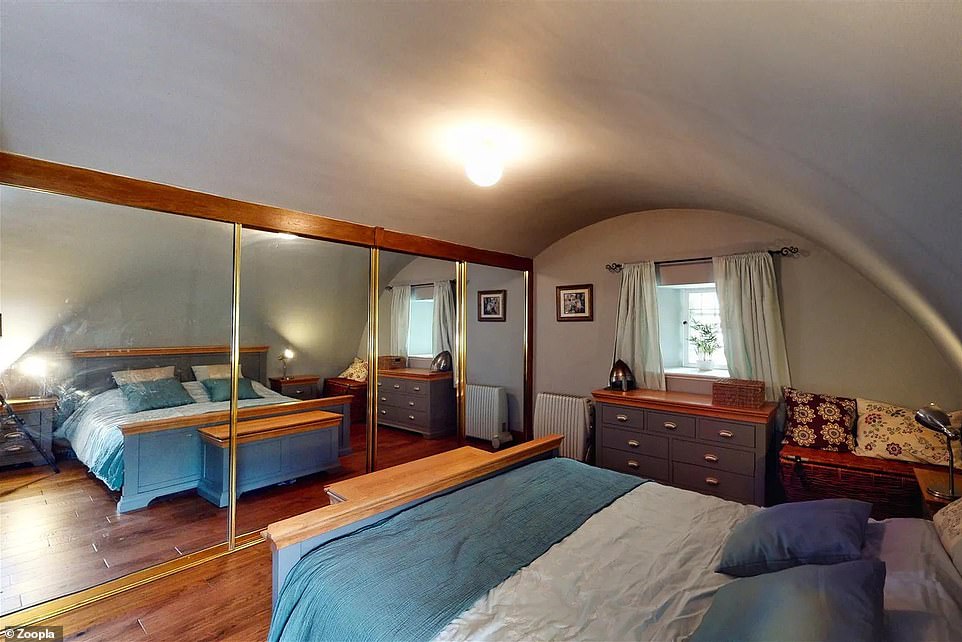 The domed ceiling continues throughout the main bedroom, which also has built-in mirrored wardrobes and a window 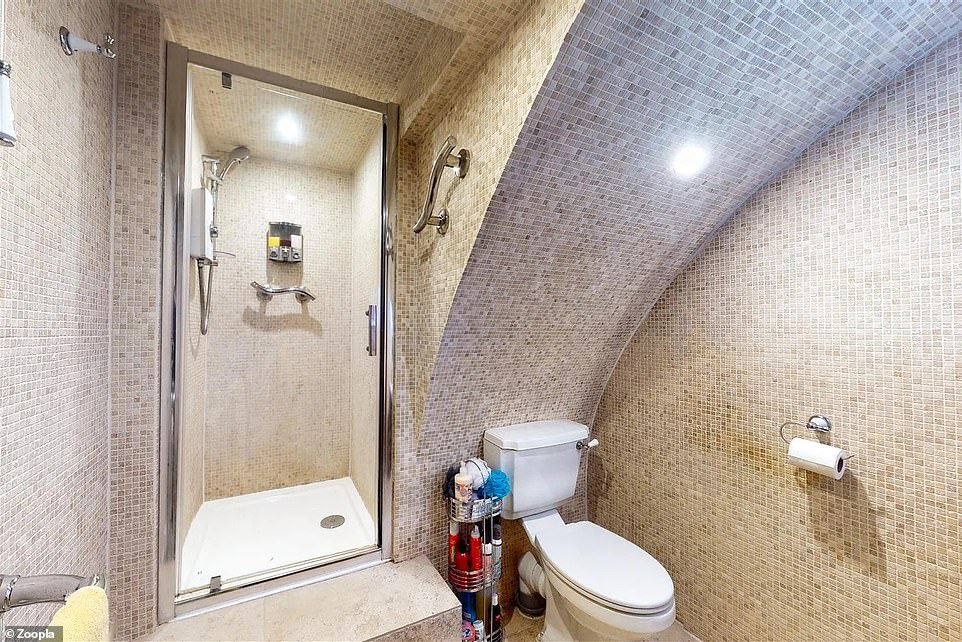 The domed theme continues in the bathroom, where mosaic wall tiles follow the arch of the ceiling and lead up to the shower 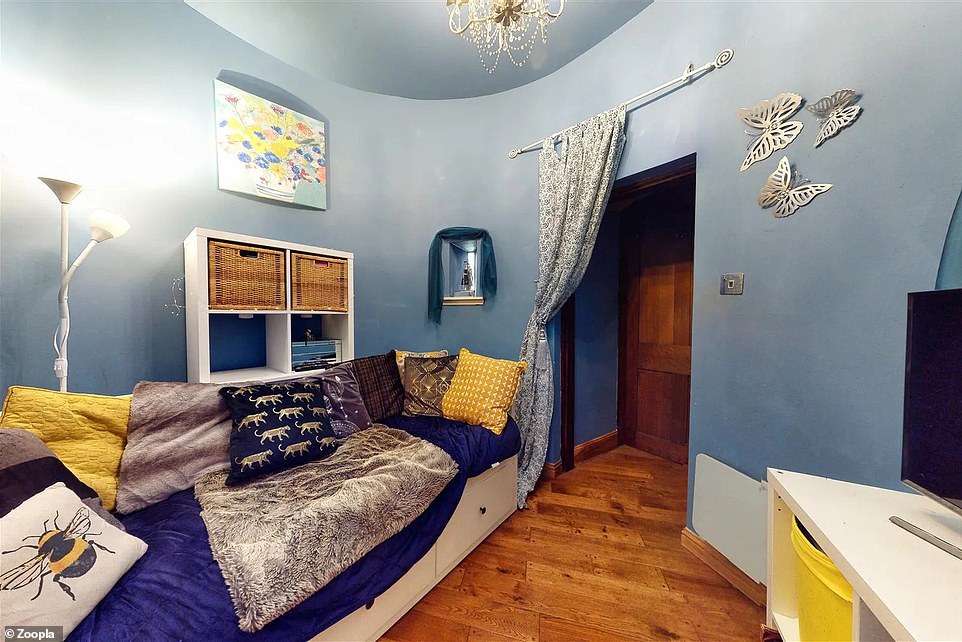 Blue walls and ceiling: The second bedroom is in one of the castle’s turrets and has space for a single bed and a desk 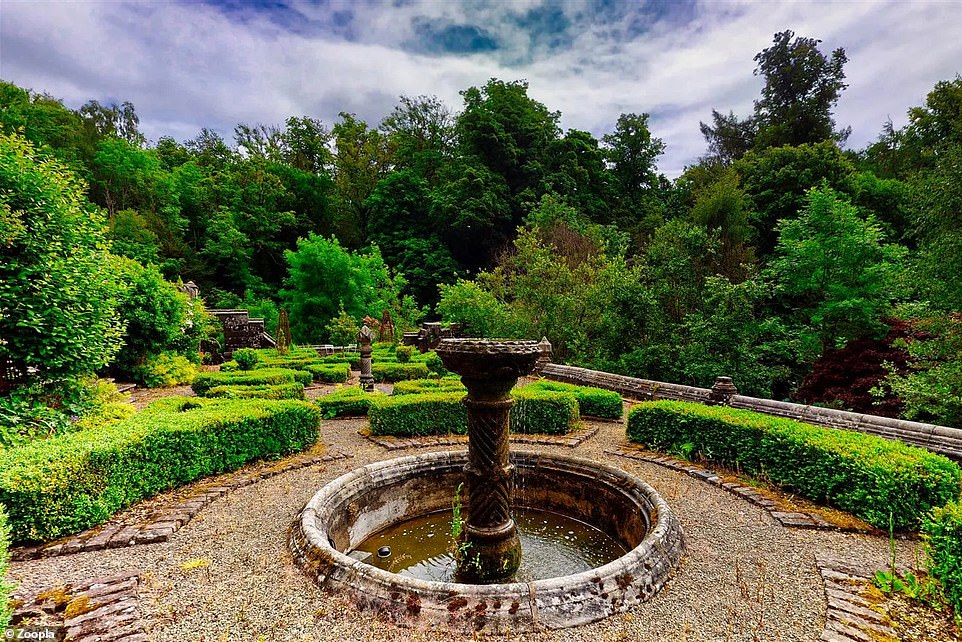 Taking a walk: The communal gardens provide plenty of space to walk freely in open green space amid the pandemic 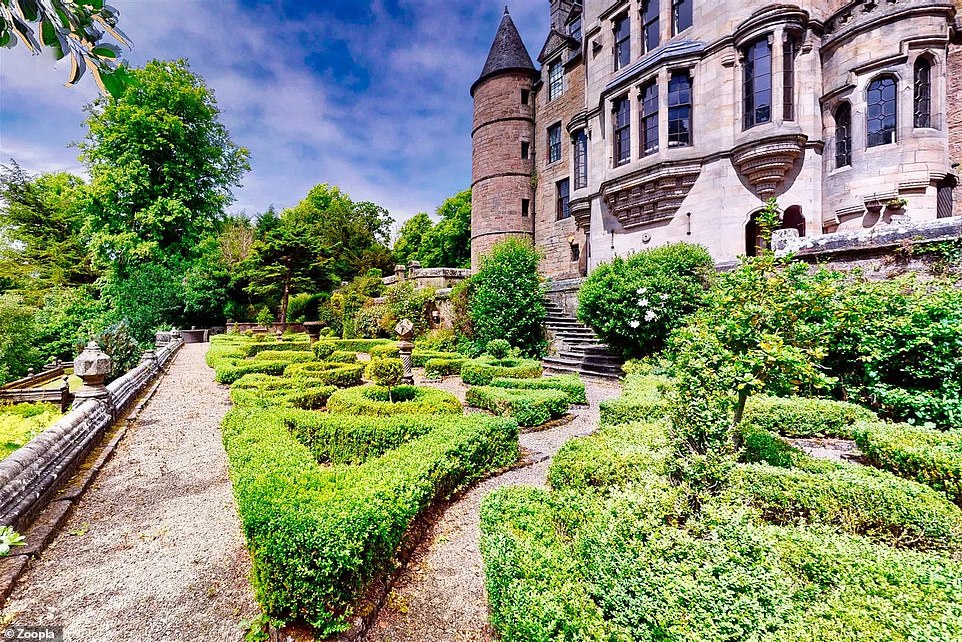 The striking apartment is on the market with an asking price of £220,000 and the sale is being handled by Upload Abode

Dublin third most expensive city in Europe for construction costs

‘It looks like a leisure centre from 1994!’: House hunters mock design for new £4.8m mansion near village popular with Premier League footballers

By Summer Goodkind For Mailonline

A six-bed mansion listed for £4.8 million in a sought-after location, popular with Premier League footballers, has been compared to ‘a leisure centre from 1994’.

The three-floored house, which has not even been built yet, has been brought to life using CGI photos.

The property is set to boast an underground garage, swimming pool, sunken spa pool and gym.

There will also be a cinema, games room, music room and a safe room for added security.

However, one house hunter joked: ‘If you are searching for a dream house that looks like a medium sized market town leisure centre, from 1994… 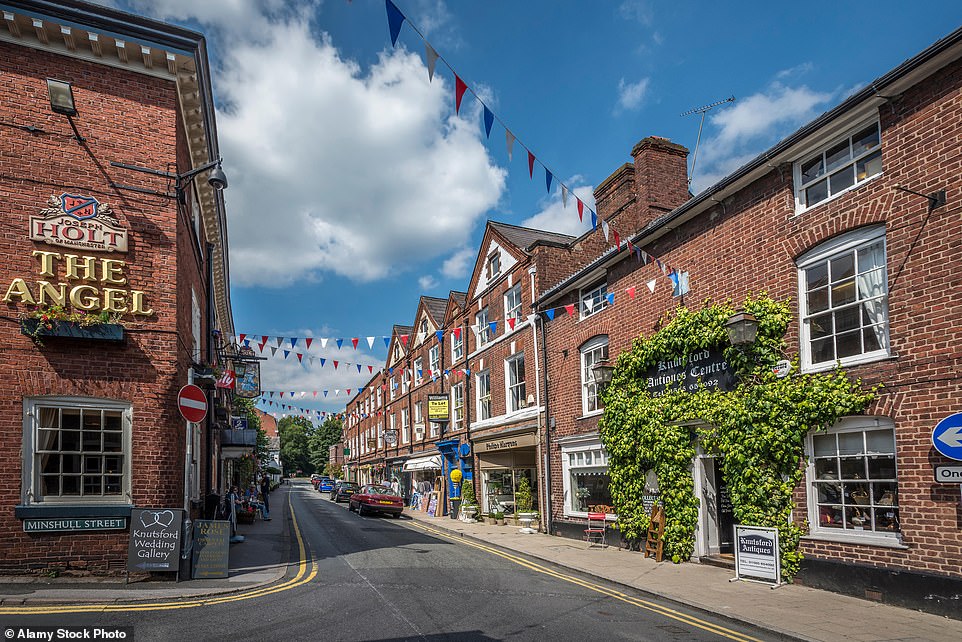 The proposed development (not pictured) is situated close to Knutsford (above) which is popular with Premier League footballers including Wayne Rooney, John Stones and Kyle Walker

Another added, ‘The multiple toilets and changing rooms just add to that feel.’

The house, located in Mobberley, Cheshire is just across from the village Knutsford, home to many top flight stars like Wayne Rooney, John Stones and Kyle Walker.

The six-bed pad will be set in six acres of land amid the countryside and will have a lift linking all the floors for maximum luxury.

The house – which has just been reduced in price – is being sold by Savills and advertised through Rightmove.

The listing reads: ‘A rare opportunity to create a unique and spectacular family home offering over 22,500 sq ft of accommodation set in approx six acres of land.

‘The accommodation is thoughtfully laid out over three floors with a flexible layout that is ideal for modern family living and entertaining on a grand scale.’

One user added: ‘The multiple toilets and changing rooms just add to that feel’

One comment read, ‘Confused by this. Does the insane price tag actually include the cost of the build? ‘It says it’s an “opportunity to create”

One comment read, ‘Confused by this. Does the insane price tag actually include the cost of the build? ‘It says it’s an “opportunity to create”.

‘Are you just getting the land and planning permission? And for that right I’d like a few more of the CGI images since you can’t actually, you know, view it.’

Another user replied: ‘I think that’s just the land.

‘Crazy eh, it’s been reduced a few times too, unsurprisingly.’

Thackeray Group has sold its Assembly Rooms office development in Putney to a private investor for more than €35.5m (£30m).Assembly Rooms is the first new office development in Putney for over a decade. Designed by Jo Cowen Architects, it provides 26,624ft² of office and retail space over basement, ground, and three upper floors, as well as a gym and panoramic roof terrace to ensure a healthy work-life balance. The Assembly Rooms was designed to ensure a highly sustainable destination through reducing energy usage, increasing positive environmental diversity, and its commitment to the health and well-being of employees.

Antony Alberti, CEO and co-founder of Thackeray Group, said: “The sale of the Assembly Rooms follows the successful completion of our business plan for the development and endorses our decision to carry out the first office development in Putney for a decade. It takes our disposals so far this year to £70 million, which provides us with equity for reinvestment into more active opportunities”.