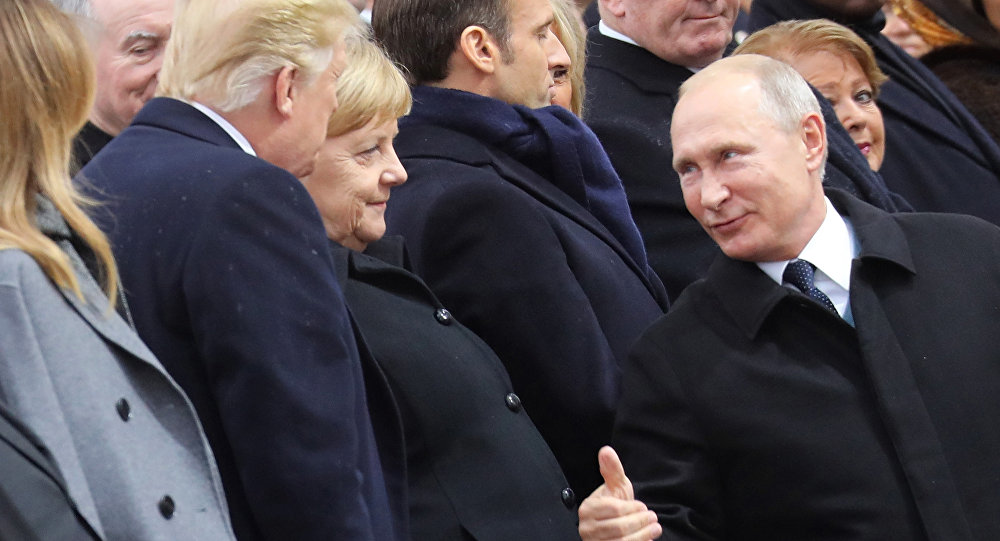 Donald Trump’s niece, Mary Trump, has become the bane of the former first family’s existence, cashing in on her relationship to former president by writing a pair of salacious tell-all books. Donald Trump has blasted his niece over what he described as her “disgraceful” behaviour, and suggested that she had never been a “family favourite.”

In an interview promoting her new book on Donald Trump, Mary Trump, the former president’s estranged niece, suggested that he preferred to deal with foreign leaders like Russian President Vladimir Putin and North Korean leader Kim Jong-un over some US allies “willing to engage in diplomacy” like the leaders of France and Germany because he values “strength.”

“The only thing that matters to him is what he views, in his mind, to be strength,” Mary Trump said, speaking to Business Insider. “I guess his definition of strength is being cruel and disruptive as possible and getting away with it all the time,” she suggested.

Trump has made no secret of his penchant for personal diplomacy, and his ability to speak to and get along with even with the leaders of US adversaries like Russia and North Korea. “I got along great with President Putin. I liked him. He liked me,” he said in a 2020 interview with Fox. “[Kim Jong-un] writes me letters. I like him. He likes me,” he said in the same interview.

Trump’s diplomacy with Kim led to historic summits in 2018 and 2019, and in June 2019, he became the first US president to ever step onto North Korean soil by crossing the Demilitarized Zone boundary between North and South Korea. Despite their personal rapport, the two leaders could not secure an agreement on the demilitarization and denuclearization of the Korean Peninsula.

During his presidency, Trump also sought to build a bond with Putin, regularly displaying signs of affection and respect during their meetings, and complimenting the Russian leader on repeated occasions. Despite these efforts, relations between the US and Russia continued to deteriorate during the Trump administration, which slapped additional sanctions on Moscow, kicked out Russian diplomats and built up the US and NATO military presence on Russia’s borders in Eastern Europe.

In her interview with Business Insider, Ms. Trump went on to suggest that her uncle was a “needy” person, and that “he raises anybody who puts him on a pedestal, no matter how bad they are.” He was also a “born autocrat” and “fascist,” she suggested, going on to say that “he probably doesn’t know what fascist means.”

Mary Trump did not provide her own definition of “fascist,” or how it might apply to her uncle, who was democratically elected in 2016, and who stepped down peacefully in January 2021, despite making repeated claims that the 2020 election was stolen from him. While fascistic leaders tend to be warmongers, Trump boasted in his concession speech about being proud to be the first US president in decades not to start any new wars. It was under his administration that the US agreed to withdraw from Afghanistan, and to dramatically reduce US troop numbers in places like Iraq and Germany.

“He thinks he deserves all the power in the world just because of who he is. In his mind, he’s always the center of the universe and thinks he should be deferred to even though he’s ignorant, the weakest, and the least intellectually curious person I’ve ever met,” Ms. Trump said of the former president.

Mary Trump’s first tell-all book ‘Too Much and Never Enough’ was published in early 2020, and became an instant New York Times Best Seller due to its salacious account of life inside the Trump family. She is now pushing her second book ‘The Reckoning: Our Nation’s Trauma and Finding a Way to Heal’, which was published in mid-August.

In addition to burning bridges with the rest of her family through her books, Mary Trump and her powerful uncle have battled it out in court, with the Trump family unsuccessfully seeking to block her first tell-all from seeing the light of day, and Ms. Trump suing her uncle and his two brothers amid claims that they had robbed her out of tens of millions of dollars in inheritance money.

Mary Trump’s 2020 book made a number of “harrowing and salacious” claims, ranging from allegations of tax evasion by Donald Trump to allegations that the business mogul and his brother Fred Trump Sr. contributed to the death of her father, Fred Trump Jr. by neglecting him at critical stages of his alcoholism. Mary also called Trump a “toxic” man with “twisted” values,” accused him of cheating on his high school exams, and claiming that he once awkwardly complimented her breasts.

Donald Trump dismissed most of the claims made by his niece in the book, but said he was “hurt” by her attacks on his father and his mother, whom he called “the most solid person I’ve ever met” and “a saint,” respectively.

Trump characterized Mary as a “seldom seen niece who knows little about me, says untruthful things about my wonderful parents (who couldn’t stand her!) and me,” and said that her book would be one of many seeking to cash in on his fame.

Mary Trump’s 2020 book was one of over half a dozen tell-all memoirs about the Trump White House, with individuals ranging from John Bolton, who Trump called “one of the dumbest people in Washington,” to former assistants Omarosa Manigault Newman and Cliff Sims, to journalists Michael Wolff and Bob Woodward writing juicy behind-the-scenes accounts about the president and his presidency. Following the publication of Wolff’s book, and its allegations that the president may have mental problems, Trump famously boasted that he was a “very stable genius” and that his “two greatest assets have been mental stability and being, like, really smart.” He repeated the “stable genius” trope for years afterwards as a means to troll his critics.

In her latest book, Mary Trump reportedly claimed that the president showed fear of Covid-19 despite putting on a brave face in public, and fed into speculation made earlier about Trump being mentally ill, while also accusing his administration of creating a “lean and ruthless machine for advancing fascism” in America.

No ‘nuclear Gibraltar’ in Scotland if it leaves UK

The Lovers’ Guide at 30: did the bestselling video make Britain better in bed? | Relationships and sex education