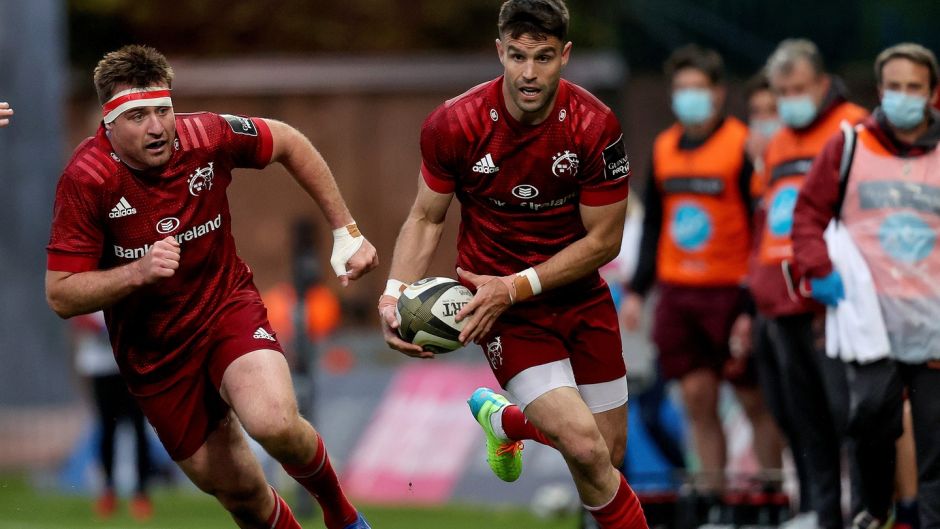 No Munster player, coach or supporter has ever dreamed of winning the Guinness Pro14 Rainbow Cup, nor targeted the trophy at the outset of the season, not least because it didn’t exist.

Even so, those initial wins over Leinster and Ulster had left Munster atop the northern half of this ingeniously formatted tournament and well placed in the foot race over five games against random opponents to top a table of 12 teams for a place in the proposed final against the leading South African side.

Munster’s selection at home to Connacht last Friday week, when 18-point favourites, was a statement of intent, but the 24-20 defeat means they are no longer in control of their own destiny.

Benetton, winless in 16 games over the regular Pro14 season, are the only team for whom that applies after backing up their commanding 46-19 home win over Glasgow by completing the double over Zebre.

Munster still head a six-strong peloton with two wins out of three but, like the others, they need Benetton to lose at home to Connacht (also still in the mix) this Saturday or away to the Ospreys on Saturday fortnight. Munster also need to beat Cardiff at Thomond Park this Friday (kick-off 7.35pm) and Zebre away a fortnight later, probably with a bonus point or two.

They will be without Conor Murray, whose minor leg injury is not expected to sideline him for longer than this week, Chris Farrell (groin), Roman Salanoa (ankle), Thomas Ahern (illness), RG Snyman (knee) and Neil Cronin (knee), but Gavin Coombes and Paddy Patterson are back.

Winning the Rainbow Cup would at least ensure Munster’s trophy drought would not extend into an 11th season, so removing that monkey from their collective backs.

“I said from the outset that we want to win this tournament, we took it very seriously,” maintained forwards coach Graham Rowntree on Tuesday. “I think our selections have reflected that as well, and certainly our performances up until the disappointment against Connacht, and that last third of the game in particular. But we are taking it very seriously.”

Friday’s game against the Blues, a point behind Munster after 17-16 and 29-28 wins over the Dragons and Scarlets, is effectively a knock-out tie. “Very much so,” agreed Rowntree. “That’s it, literally; it’s a knock-out game.

“We’ve played against them twice this year, they’re a good team. Dai (Young) has made a change there going in. They’re a physical team, good defensively, good in the breakdown, massive attacking threat as well, a running ‘10’ and running ‘9’ threat,” added Rowntree in reference to the dangerous Tomos Williams-Jarrod Evans combination.

Cronin is not the first to discover that this was an unfortunate year to be out of contract for, at 30, he should be entering a prop’s prime years

“We’ll have our hands full, which is exactly what we need. We’re ready for it. We’ve certainly trained with this in mind and our preparation has gone really well.”

Munster confirmed last week that they are releasing James Cronin. Munster wanted to keep him but with budget cuts also contributing to compulsory redundancies elsewhere in the organisation, couldn’t afford to do so.

Cronin is not the first to discover that this was an unfortunate year to be out of contract for, at 30, he should be entering a prop’s prime years.

He has played 142 games for Munster (and won three caps for Ireland), including 13 starts this season, more than the other four loose-heads in the squad combined, in what has probably been his best campaign to date. Cronin started the Pro14 final against Leinster, the Champions Cup win over Harlequins and was on the bench against Toulouse.

Contractual decisions are not part of Rowntree’s remit, and he was reluctant to add any more to Munster’s statement last week other than making his admiration for Cronin clear.

“I think he has been very good for us this year and I think, in any career, you’ve got to experience something new, which he will be looking to do. I can’t speak highly enough about working with the guy and wherever he goes, he will be successful.”

Injuries and Irish call-ups have restricted the 32-year-old David Kilcoyne to just three starts out of seven appearances for Munster this season, so the province have certainly made a statement of faith in Liam O’Connor (25, two starts this season), Jeremy Loughman (25, one start) and Josh Wycherley, who will graduate from the academy this summer.

The 20-year-old made four starts this season and performed manfully when pressed into a full Heineken Cup debut in the comeback win away to Clermont last December. He played 77 minutes that night, although he has been restricted to just 72 minutes since, in part due to several niggly injuries.

“It’s a very, very competitive position,” said Rowntree. “I think we’ve seen that this season with the performances of the guys there, Jeremy Loughman and Liam [O’Connor] in particular. Then Josh [Wycherley] took his chance; that game he had in Clermont was incredible. Stocks are good there. Guys do come through and guys leave the club, that’s just the nature of clubs.”