Ukraine has accused the Kremlin of ignoring its request for talks between the two countries’ presidents over a build-up of Russian troops near its border, but Moscow said its soldiers were on its own territory, unlike US forces in the region, Reuters writes. Kiev and Moscow have traded blame over the worsening situation in the eastern Donbas region, where Ukrainian troops have battled Russian-proxy forces in a conflict since 2014.

Tennessee High School Shooting: What Is Known So Far

The funeral of a Roma man killed while in Czech police custody was held over the weekend. Stanislav Tomáš died after a Czech police officer kneeled on his neck, in scenes reminiscent of the murder of George Floyd by a US police officer in Minneapolis. Tomáš passed away 19 June, while being rushed to the hospital. The police have denied wrongdoing. 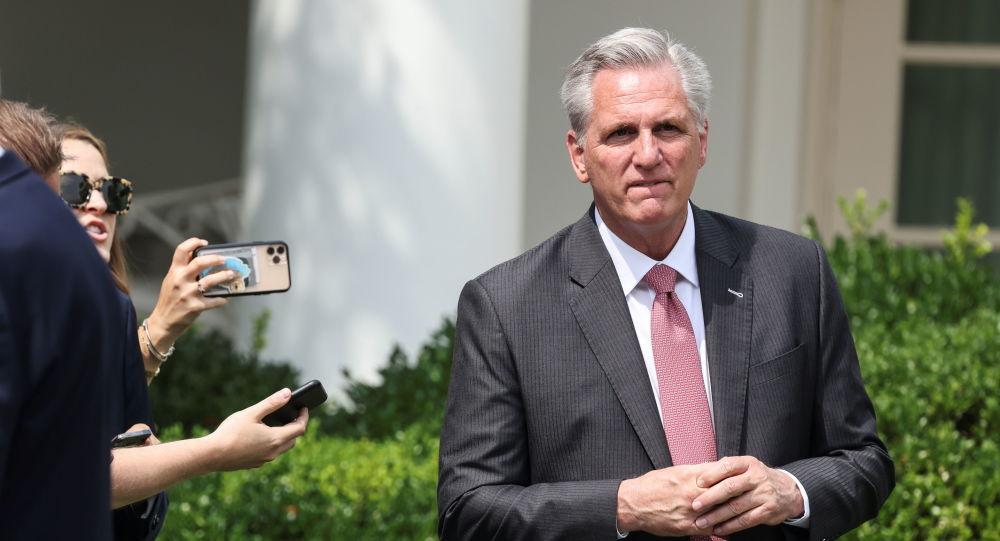 US House Speaker Nancy Pelosi (D-CA) confirmed on Sunday that Rep. Adam Kinzinger (R-IL) has been appointed to serve on the US House-approved select committee probing the January 6 attack on the US Capitol building. This move comes days after Pelosi rejected two out of five GOP recommendations from House Minority Leader Kevin McCarthy (R-CA).

Though it appears the January 6 commission will move forward, the House Minority Leader did not appear to change the GOP stance on the matter when approached by reporters on Monday.

“Some Republicans have been saying … that the GOP should play ball on this committee. You could get the three,” a reporter asked in reference to Reps. Rodney Davis (R-IL), Kelly Armstrong (R-ND) and Troy Nehls (R-TX).

All three lawmakers received Pelosi’s approval for appointment, but they were ultimately held back by McCarthy, who demanded the House Speaker also appoint Reps. Jim Jordan (R-OH) and Jim Banks (R-IN). Pelosi has asserted that Jordan and Banks would endanger the probe’s “integrity.”

McCarthy brushed the reporter’s suggestion aside, arguing that Cheney and Kinzinger are the only House Republicans who would “play ball” in an effort for the commission to have a bipartisan quorum.

“Who is that, Adam [Kinzinger] and Liz [Cheney]?” he floated. “Arent they kinda, like, Pelosi Republicans?”

Moments later, the House Minority Leader informed reporters that he has not decided whether the two anti-Trump Republicans will be punished for joining the select committee amid the House GOP’s boycott of the group.

“We’ve got very serious business here. We have important work to do,” she asserted to reporters on Monday.

Both Cheney and Kinzinger are slated to meet up with their Democratic colleagues for their first select committee meeting on Tuesday. The group’s first witness is also expected to make an appearance.

McCarthy has maintained that Pelosi is pursuing a “sham process” by rejecting Jordan and Banks from the select committee.

U.S. House Minority Leader Kevin McCarthy (R-CA) announces the withdrawal of his nominees to serve on the special committee probing the Jan. 6 attack on the Capitol, as two of the Republican nominees, Reps’ Jim Jordan (R-OH) and Jim Banks (R-IN), standby during a news conference on Capitol Hill in Washington, U.S., July 21, 2021

“Speaker Pelosi’s rejection of the Republican nominees to serve on the committee and self-appointment of members who share her preconceived narrative will not yield a serious investigation,” McCarthy wrote on Sunday, shortly after Pelosi announced Kinzinger’s appointment. “The Speaker has structured this select committee to satisfy her political objectives. She had months to work with Republicans on a reasonable and fair approach to get answers on the events and security failures surrounding January 6.”

Republicans have also argued that the investigation should focus on why the US Capitol was not properly secured on January 6, despite reports claiming law enforcement had information leading up to the attack.

“The U.S. Capitol and the men and women who protect it suffered a massive leadership failure. We must make sure that never happens again,” the House Minority Leader noted on Sunday, claiming the GOP will carry out its own probe on the deadly riot.

On the wide, flat plain of the Sinjar district of northern Iraq, Naif Khalaf Qassim lets his dog, an eight-year-old Belgian shepherd, range across the dry earth on a 30-metre leash until Branco stops and sits, tail wagging, looking towards his handler with enthusiasm.

Branco has detected something underground and, when the mine-clearing team is brought in to investigate, they find an improvised explosive device (IED), known locally as a VS500.

It is about 30cm (1ft) wide, with a plastic casing and a central pressure pad. The VS500 is not the name Islamic State give the device; no one knows that. All that is certain is that it is one of thousands produced when the terror group held sway over this part of Iraq and commandeered plastics factories in their Mosul base, forcing the workers to make souped-up versions of the Italian-made VS50 landmine.

A VS50 could fit on the palm of your hand, and contains about 100g of explosives. The deminers call this type of mine the VS500 because it is 10 times the size and packed with up to 15kg (33lb) of explosives. The pressure pad is sensitive enough for a child to activate, even through 30cm of packed earth. The explosion can take out an armoured vehicle.

Branco is trained to sniff ahead in a controlled manner and stop if he gets a scent – so he doesn’t tread on the mine. Belgian and German shepherds are used because they are most adept at distinguishing scents.

“I knew Branco would find the IED,” says Naif proudly. “I believe in him and his abilities; I know him and what he can do. He is more of a friend to me than a dog.”

Four years ago, Iraqi forces managed to take the last stronghold that Isis had left in the country, the city and surroundings of Tal Afar. The Iraqi flag was raised on the historic Ottoman citadel at the heart of the city, and the militia was pushed into Syria.

The war might have appeared over by late August 2017, but retreating Isis forces seeded the towns, villages and countryside in that area of Sinjar with IEDs, and the job of clearing them is still far from done.

But it is moving at a much faster pace, thanks to the introduction of the small sniffer dog team, including Branco, and his handler, Naif, 35.

Mine-detection dogs are not new – the British-based Mines Advisory Group (MAG) has been working across northern Iraq for three decades. In the year from June 2020 to June 2021 the Iraqi dog team has found and destroyed 3,540 landmines and explosive remnants of war, including 670 improvised mines and 148 other improvised devices.

Now MAG has embarked on a specific programme to better detect the explosives used by Isis and other non-state groups.

Dogs are usually trained to sniff out explosives, mainly TNT, but the IED dogs take this a step further. Trained in Bosnia-Herzegovina, their noses are attuned to rubber, metal and batteries as well.

This is key where explosives are often improvised from domestic items such as pots and kettles, with detonators and batteries. Training dogs to focus on a wider range of scents allows for more opportunities to detect anomalies below the surface.

The new four-strong dog team (with two more on their way from Bosnia-Herzegovina) is currently working on 8sq km of land near Tal Afar that was used as a barrier minefield by retreating Isis fighters in 2017. While people armed with mine detectors painstakingly scour a known mined corridor, the dogs range across the areas either side, deemed low or medium risk, to seek out any randomly planted devices.

The programme for the “super-detector” dogs was curtailed until now by Covid and by difficulties negotiating with the administration in Sinjar – divided between the Iraqi federal government and the Kurdistan regional government.

The dogs start work at 5am, so that they can finish before the sun is too high – last week temperatures there hit 49C (120F). The handlers are from the Yazidi community.

Vian Khaider Khalaf, 26, was a student before starting work with the dogs in 2017. She works to support her family in Sinuni, but like everyone on the team, her driving motivation is to clear the mines so that families can return to their farms.

“We always had dogs at home, as my family are farmers and shepherds,” says Khalaf. “I fled with my family in 2014 when Daesh [Isis] came. I still have family in an IDP [internally displaced people] camp in Kurdistan. My family are afraid for me, of course. But they are proud of me and see me working hard and bravely, and that makes me want to take on more challenges.”

Khalaf has worked with her dog, X-Lang, since she started with MAG. He was originally a mine-detector dog, but was selected for the IED upgrade training. She says: “The relationship between me and my dog is not really that of a human and an animal. He is my dear friend. If I could take him home with me at the weekend, or live on the base with him, I would.”

The relationship between me and my dog is not really that of a human and an animal. He is my dear friend

After their shifts out in the fields, handlers and dogs spend the rest of the day together, often around the pool on the base.

The team supervisor is Salam Rasho, a former noncommissioned officer with the Kurdistan military, the peshmerga. He is also a Yazidi and has seen the devastation of his community. “Our aim is to return the people to their land, to get people farming the land again,” he says.

It’s impossible to estimate how much unexploded ordnance there is in Iraq – one of the most mined countries in the world, according to some estimates. There is little information about where mines were laid over the past 40 years, from the Iran-Iraq war in the 1980s, to Saddam Hussein’s assaults on his own people, the Gulf War, and finally Isis. It is thought that in federal Iraq alone there are some 3,000 sq km of mined land yet to be cleared, with 8.5 million people living in close proximity.

The real benefit of the dogs, says Salam, is that they can cover a huge area much quicker than humans – about 1,500 sq metres a day. The success of the Iraq deployment means that MAG is stepping up its IED dog training and even going to the next level – finessing the programme so that dogs can also be used to help clear booby-trapped homes.

Clearing Iraq of unexploded mines is a task that will take many more years, but at least now the land is being freed from the lingering grip of Isis at a faster pace than before thanks to Branco, X-Lang and the other dogs of war.