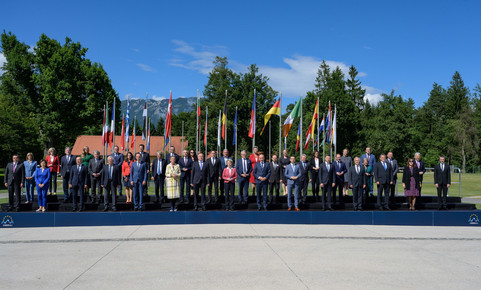 Questions over the rule of law and respect for democratic values marred the start of the Slovenian presidency of the EU Council, with a pubic rift between Brussels and Ljubljana as host prime minister Janez Janša declared that “smaller countries in the EU are treated as second class”.

And in a sign of behind-the-scenes tensions, the head of the Green Deal and former EU commissioner for the rule of law, Frans Timmermans, refused to join a group photograph with the right-wing premier, over Janša’s “unacceptable attack” on two Slovenian judges and two socialist MEPs.

After questions arose over the independence of the judiciary in Slovenia during the opening meeting between the Slovenian government and the European Commission, Janša showed a photo in which the two judges and two MEPs appeared and identified them as political enemies.

Speaking to the press on Friday (2 July), the conservative prime minister said that Timmermans got upset when the Slovenian government demonstrated “how members of the high court in Slovenia are making political campaigns on Sunday, and delivering independent rulings on Monday”.

“This is not independence,” Janša said, arguing that Timmermans’ questions over the rule of law were thereby answered.

“We did not start the discussion…If he was offended by our replies, we only try to explain it,” Janša added. “If you dislike the truth this is actually your problem, not a problem for the truth.”

Meanwhile, an off-the-cuff remark from Slovenia’s interior minister Aleš Hoj raised eyebrows in Ljubljana and beyond.

When asked about previous tweets in which he referred to anti-government protesters as pigs, Hoj said that he would call a certain individual a “swine” who is not on Prešeren Square – where the protests took place – but sitting “high in the EU bureaucracy”.

After many interpreted the comments as a reference to Timmermans, the interior minister clarified on social media that he was not referring to commission vice president when answering the journalists’ questions.

The tensions between Brussels and Slovenia come just a few days after a row broke out at an EU leaders’ summit over the new anti-LGBTIQ law approved in Hungary – with Janša and Poland’s premier Mateusz Morawieck backing Hungarian prime minister Viktor Orbán.

“If you judge someone on imaginary European values which everyone perceives differently and where dual standards are used, this is the fastest road to collapse,” Janša said, arguing that “an honest discussion” was necessary within the context of the Conference on the Future of Europe in order to clarify certain notions.

If the discussion about the future of Europe excludes some points of view, the EU “will continue to shrink,” he also said, pointing out that Orban has the right to express how he envisages the future of the EU.

“The EU without central Europe is not the EU,” he added.

For Janša, the EU is composed of 27 member states and it will not become a “melting pot” in which everyone thinks alike, saying that was “idealistic”.

When asked about the situation of media freedom in Slovenia, the prime minister showed a video produced by his government that questions the threats and obstacles journalists have reported.

He pointed out that some journalists in the country end up becoming politicians, arguing this was “wrong” if it only happens one on one side of the political spectrum.