The number of Facebook and Instagram users on iOS agreeing to be tracked by the social networking behemoth for targeted ads has fallen drastically in the week since Apple’s iOS 14.5 debuted – and Zuck & Co have hit back.

The App Tracking Transparency framework in iOS 14.5 requires companies to ask permission to observe the activities of iOS app users – that is to say, to link application usage and data with user or device information collected from other sources for targeted advertising or analytics.

This opt-in regime looks to be an extinction event for the current incarnation of targeted advertising, on iOS at least. According to analytics biz Flurry, only about 12 per cent of iOS users worldwide and only four per cent in the US have decided they want to be tracked.

That disinterest in data surveillance has been anticipated for months. Facebook began warning ad buyers about the impact of iOS 14.5 last August and in December launched a campaign claiming Apple’s unilateral privacy clampdown would hurt small businesses.

In April, with the launch of iOS 14.5 imminent, Facebook warned investors about potential “ad targeting headwinds.” And the social ad biz has reportedly been preparing for a possible antitrust case against Apple’s unilateral ad business limitations. Such cases have already been filed by media companies in France and Germany.

To gin up interest in being tracked, Facebook has been presenting users of its iOS Facebook app and its iOS Instagram app with a popover action sheet alerting users to Apple’s newly implemented tracking restrictions and advising them that if they enable tracking, they can “Help keep Facebook free of charge.” 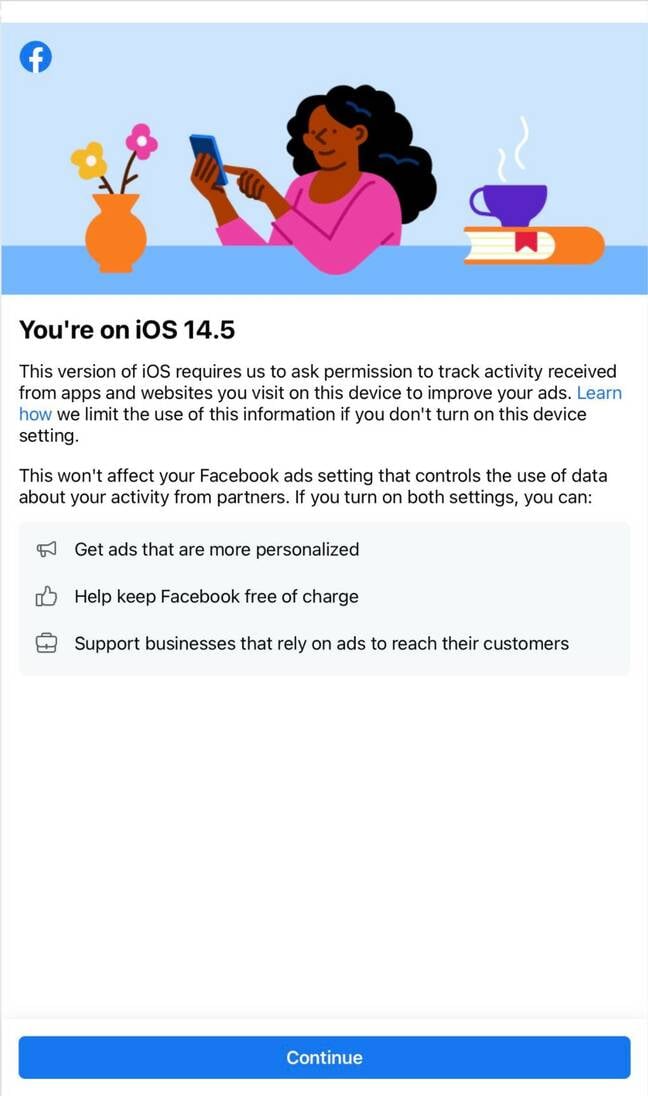 The Register understands Facebook has no plan to begin charging for its services – a possibility teased in email scams that Facebook has repeatedly dismissed.

And if Facebook did decide to charge a subscription fee, it would probably receive an injunction from the US Federal Trade Commission (FTC) for misrepresentation. As Ashkan Soltani, a privacy researcher and former technologist for the FTC, pointed out recently, up through August 2019, Facebook on its Sign Up webpage said, “It’s free and always will be.”

In a statement emailed to The Register, a Facebook spokesperson characterized its iOS interface copy as educational messaging, which Apple allows.

“At Facebook we use data to provide personalized ads, which support small businesses and help keep apps free of charge,” Facebook’s spokesperson said. “As Apple has said that providing additional context is allowed, we are showing an educational screen before presenting Apple’s prompt to help people make an informed decision about how their information is used.”

“It provides more details about how we use data for personalized ads, as well as the ways we limit the use of activity other apps and websites send us if people don’t turn on this device setting. Our screen also lets people know that they’re seeing Apple’s prompt due to Apple’s requirements for iOS 14.5.”

The Register asked Soltani whether privacy regulators might conceivably see Facebook’s hint about the possibility of future fees as a dark pattern, a topic of current concern at the FTC.

“I think Facebook’s language could be seen as coercive but I think it would be difficult for a regulator to be able to enforce it as deceptive or a dark pattern,” he said.”‘Help to keep Facebook free of charge’ isn’t a direct threat. Nor is it illegal to ask a user to pay for a service if they opt-out of the sharing of their personal information.”

The Register asked Facebook whether its educational campaign about the benefits of tracking had prompted more people to opt-in, but the company’s spokesperson didn’t have any data available to share. ®

No shame: the podcast taking on the Arab world’s sex and gender taboos | Podcasting

Elon Musk has sold $6.9bn (£5.7bn) worth of shares in Tesla after admitting that he could need the funds if he loses a legal battle with Twitter and is forced to buy the social media platform.

The Tesla CEO walked away from a $44bn deal to buy Twitter in July but the company has launched a lawsuit demanding that he complete the deal. A trial will take place in Delaware in October.

“In the (hopefully unlikely) event that Twitter forces this deal to close *and* some equity partners don’t come through, it is important to avoid an emergency sale of Tesla stock,” Musk said in a tweet late on Tuesday.

In other comments on Twitter on Tuesday, Musk said “yes” when asked if he was finished selling Tesla stock. He also said he would buy Tesla stock again if the Twitter deal does not close.

Musk has committed more than $30bn of his own money to the financing of the deal, with more than $7bn of that total provided by a coterie of associates including tech tycoon Larry Ellison, the Qatar state investment fund and the world’s biggest cryptocurrency exchange, Binance.

Musk, the world’s richest person, sold $8.5bn worth of Tesla shares in April and had said at the time there were no further sales planned. But since then, legal experts had suggested that if Musk is forced to complete the acquisition or settle the dispute with a stiff penalty, he was likely to sell more Tesla shares.

Last week Musk launched a countersuit against Twitter, accusing the platform of deliberately miscounting the number of spam accounts on the platform. Twitter has consistently stated that the number of spam accounts on its service is less than 5% of its user base, which currently stands at just under 238 million. Legal experts have said that Musk will find it hard to convince a judge that Twitter’s spam issue represents a “company material adverse effect” that substantially alters the company’s value – and therefore voids the deal.

Musk sold about 7.92m Tesla shares between 5 August and 9 August, according to multiple filings. He now owns 155m Tesla shares or just under 15% of the electric carmaker.

The latest sales bring total Tesla stock sales by Musk to about $32bn in less than one year. However, Musk remains comfortably ahead of Jeff Bezos as the world’s richest man with an estimated $250bn fortune, according to the Bloomberg billionaires index.

Tesla shares have risen nearly 15% since the automaker reported better-than-expected earnings on 20 July, also helped by the Biden administration’s climate bill that, if passed, would lift the cap on tax credits for electric vehicles.

Musk also teased on Tuesday that he could start his own social media platform. When asked by a Twitter user if he had thought about creating his own platform if the deal didn’t close, he replied: “X.com”.

Iran reveals use of cryptocurrency to pay for imports • The Register

Iran has announced it used cryptocurrency to pay for imports, raising the prospect that the nation is using digital assets to evade sanctions.

Trade minister Alireza Peyman Pak revealed the transaction with the tweet below, which translates as “This week, the first official import order was successfully placed with cryptocurrency worth ten million dollars. By the end of September, the use of cryptocurrencies and smart contracts will be widespread in foreign trade with target countries.”

It is unclear what Peman Pak referred to with his mention of widespread use of crypto for foreign trade, and the identity of the foreign countries he mentioned is also obscure.

But the intent of the announcement appears clear: Iran will use cryptocurrency to settle cross-border trades.

That’s very significant because Iran is subject to extensive sanctions aimed at preventing its ability to acquire nuclear weapons and reduce its ability to sponsor terrorism. Sanctions prevent the sale of many commodities and technologies to Iran, and financial institutions aren’t allowed to deal with their Iranian counterparts, who are mostly shunned around the world.

As explained in this advisory [PDF] issued by the US Treasury, Iran has developed numerous practices to evade sanctions, including payment offsetting schemes that let it sell oil in contravention of sanctions. Proceeds of such sales are alleged to have been funnelled to terrorist groups.

While cryptocurrency’s anonymity has been largely disproved, trades in digital assets aren’t regulated so sanctions enforcement will be more complex if Iran and its trading partners use crypto instead of fiat currencies.

Which perhaps adds more weight to the argument that cryptocurrency has few proven uses beyond speculative trading, making the ransomware industry possible, and helping authoritarian states like Iran and North Korea to acquire materiel for weapons.

Peyman Pak’s mention of “widespread” cross-border crypto deals, facilitated by automated smart contracts, therefore represents a challenge to those who monitor and enforce sanctions – and something new to worry about for the rest of us. ®

Edwards Lifesciences is hiring at its ‘key’ Shannon and Limerick facilities

The medtech company is hiring for a variety of roles at both its Limerick and Shannon sites, the latter of which is being transformed into a specialised manufacturing facility.

Medical devices giant Edwards Lifesciences began renovations to convert its existing Shannon facility into a specialised manufacturing centre at the end of July.

The expansion will allow the company to produce components that are an integral part of its transcatheter heart valves. The conversion is part of Edwards Lifesciences’ expansion plan that will see it hire for hundreds of new roles in the coming years.

“The expanded capability at our Shannon facility demonstrates that our operations in Ireland are a key enabler for Edwards to continue helping patients across the globe,” said Andrew Walls, general manager for the company’s manufacturing facilities in Ireland.

According to Walls, hiring is currently underway at the company’s Shannon and Limerick facilities for a variety of functions such as assembly and inspection roles, manufacturing and quality engineering, supply chain, warehouse operations and project management.

Headquartered in Irvine, California, Edwards Lifesciences established its operations in Shannon in 2018 and announced 600 new jobs for the mid-west region. This number was then doubled a year later when it revealed increased investment in Limerick.

When the Limerick plant was officially opened in October 2021, the medtech company added another 250 roles onto the previously announced 600, promising 850 new jobs by 2025.

“As the company grows and serves even more patients around the world, Edwards conducted a thorough review of its global valve manufacturing network to ensure we have the right facilities and talent to address our future needs,” Walls told SiliconRepublic.com

“We consider multiple factors when determining where we decide to manufacture – for example, a location that will allow us to produce close to where products are utilised, a location that offers advantages for our supply chain, excellent local talent pool for an engaged workforce, an interest in education and good academic infrastructure, and other characteristics that will be good for business and, ultimately, good for patients.

“Both our Shannon and Limerick sites are key enablers for Edwards Lifesciences to continue helping patients across the globe.”

10 things you need to know direct to your inbox every weekday. Sign up for the Daily Brief, Silicon Republic’s digest of essential sci-tech news.