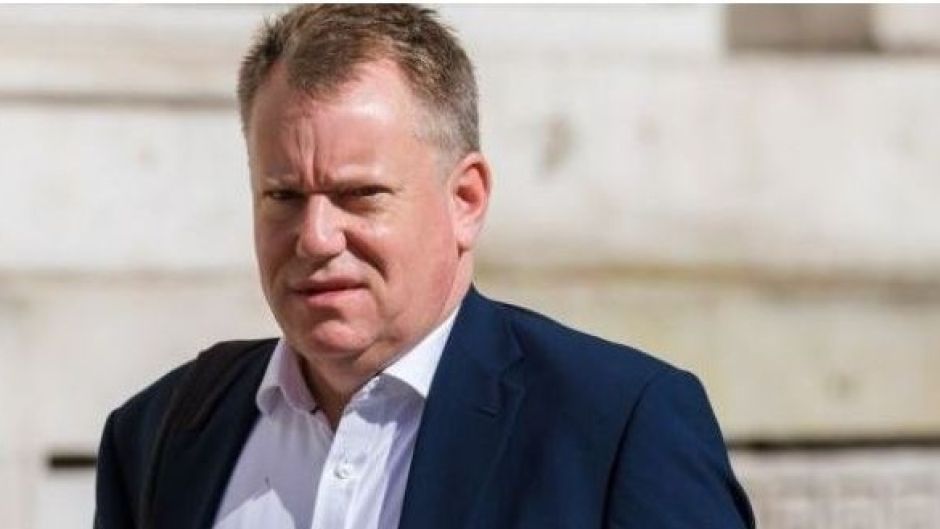 Britain’s Brexit minister David Frost has rejected any solution to the dispute over the Northern Ireland protocol that is based on a more flexible approach to its rules. He told the British-Irish Association in Oxford that negotiations with the European Union must address the way the protocol is constructed rather than just how it is implemented.

“We need to see substantial and significant change. It is going to need serious engagement with our proposals, and specifically with the three areas that we say need to change – movement of goods into Northern Ireland, the standards for goods within Northern Ireland and the governance arrangements for regulating this. I want to be clear that any response which avoids serious engagement with those ideas, and aims at just dragging out the process, will, in the end, not work for us,” he said.

The EU has not formally responded to a British paper outlining the proposals published in July, but officials have been in talks during August. Mr Frost has requested a stand-still period during which grace periods delaying the implementation of parts of the protocol would be extended and the EU would pause legal action against Britain over breaches of the agreement.

The EU has already paused its legal action but has not yet announced an extension of grace periods due to expire at the end of September. Taoiseach Micheál Martin said on Friday that the EU had shown its ability to respond positively to the concerns of people in Northern Ireland, adding that he believed “sensible solutions” could be found within the framework of the protocol.

Mr Frost said his proposals sought to find a new balance in the protocol but that they went with the grain of the agreement.

“They do not remove it. They retain controls in the Irish Sea for certain purposes. They envisage that EU laws can still be valid, within certain circumstances, in Northern Ireland. And they recognise that the EU and Ireland have an extremely legitimate interest in how these arrangements are enforced. Some would like us to sweep all the existing arrangements away. That is not our position,” he said.

Mr Frost asserted that the threshold for triggering Article 16, which allows one party to unilaterally suspend parts of the protocol, had been met. But he wanted instead to use Article 13 (8) of the agreement, which allows the protocol to be superseded by a new agreement between Britain and the EU.

“You should be in no doubt about the centrality of this problem to our politics and to this government. The issue needs to be fixed and we are determined to fix it,” he said.

Unfinished Beethoven symphony reimagined in a click in Switzerland

With the arguable exception of second city Aarhus, Copenhagen is significantly more expensive to rent housing than anywhere else in Denmark.

But the extra cost in the capital depends on where else in Denmark you compare with, as well as the type of housing you rent.

First, it is important to note the difference between the two main types of rental housing in Denmark: private rentals and almene boliger (literally, ‘general housing’), a form of subsidised housing.

For almene boliger, local municipalities put up 10 percent of building costs and in return have the right to decide who is allocated one in four available apartments, enabling them to provide housing to municipal residents who need it. The housing therefore plays a role in the social housing provision.

Aside from housing assigned by the municipality, almene boliger are open for anyone. However, to get one, you must get to the top of a waiting list, which you join by signing up with associations which operate housing in the city where you live (or want to live).

In Copenhagen or Aarhus, it can take years to get to the top of these lists, while in smaller cities you might get an offer in weeks or even days.

As such, many newcomers to Denmark must turn to the private rental market if they are living in one of the main cities.

A study conducted by housing research centre Bolius in November 2020 found the cost of a 56 square-metre apartment in Copenhagen’s Nørrebro district to be 8,536 kroner per month.

The study, which was based on data from 2019 and 2020 from rental platforms boliga.dk and boligportal.dk, shows the average monthly cost of non-limited private apartments on Nørrebro, compared with 16 other locations in Denmark.

The cost takes into account the cost of a deposit (normally three months’ rent) and adds it to the average cost of renting the housing for five years (thereby assuming none of the deposit is returned to the tenant).

In comparison to the price in Nørrebro, the study found rent in Hillerød north of Copenhagen to be slightly less (8,218 kroner) for a slightly larger apartment (65 square metres).

Moving further out from Copenhagen, costs begin to drop even more.

In Kalundborg on the west coast of Zealand, you can rent a 71-square-metre flat for 5,167 kroner per month. Næstved, a commuter town between Copenhagen and the Great Belt Bridge, comes in at 6,039 kroner for an apartment at 72 square metres.

Although Aarhus is not included in the study, third-largest city Odense is. Here, there is still a significant saving on Copenhagen, with 8,488 kroner, a similar rent to that in Nørrebro, getting you an apartment over 50 percent bigger at 82 square metres.

Rent prices for almene or subsidised housing were most recently analysed in a 2020 report by Landsbyggefonden (National Building Foundation), a support institution for the social housing sector.

According to that report, the rent for family housing (meaning housing not reserved for students or seniors) is “on average, approximately 100-200 kroner per square metre higher [per year, ed.] east of the Great Belt Bridge than west of it”.

Of the five administrative regions, average rent for family subsidised housing is highest in Greater Copenhagen at 906 kroner per square metre for a year’s rent.

The lowest rents can be found in South Denmark, where the yearly cost is 722 kroner per square metre.

Zealand is the region that comes closest to Copenhagen on the costs for this type of regular housing. Here, tenants can expect to pay 859 kroner per square metre in a year. The equivalent costs in Central Jutland and North Jutland and 778 kroner and 747 kroner respectively.

The study also places Greater Copenhagen as the most expensive region when rents are presented as the median monthly rent for family housing.

Here, the median values are split into five categories based on apartment size, with Copenhagen coming out as the most expensive region for each category.

The Government should buy a number of privately-owned direct provision centres as a “priority” as it would be more “cost effective” for the State to run the facilities for asylum seekers, international protection officials have said.

The savings arising from owning the accommodation centres rather than paying private contractors to do so “could be considerable”, departmental briefing documents provided to Minister for Children and Integration Roderic O’Gorman last year state.

The vast majority of direct provision centres are currently owned and run by private companies, with accommodation providers having received some €1.6 billion since 1999, including €183 million last year.

The latest figures show some 7,150 people are in the system of seven State-owned sites and 39 private centres. A further 24 commercially-owned premises are being used to provide emergency accommodation for asylum seekers.

The briefing document, released to The Irish Times under the Freedom of Information Act, says that housing people seeking asylum in State-owned centres would provide the “best protection from the vulnerability of present market reliance”.

“They are also much more cost efficient to run, and the State owns the asset,” it notes.

The document suggested that State centres should aim to accommodate 5,000 people, and “allowing the private sector to supply the rest is regarded as an achievable and reasonable target”.

The purchase of existing centres from private providers “to immediately boost the State’s footprint in this area should be considered as a priority,” the internal document said.

“Some service providers may be open to this and the market appears to be favourable at present,” it said.

The internal briefing suggested the department could then seek private companies or NGOs to run the centres, which would be a “competitive cost option”.

Ongoing maintenance for centres owned by the State was also “badly needed,” as current pressures on the Office of Public Works (OPW) meant it was not possible “for immediate repairs to be done if required”.

“In exploring the model of more State centres, we need to agree and acquire a capital budget,” the briefing stated.

The document says that State centres “can also have a bigger footprint as it will be a permanent fixture in the locality”. In recent years a number of plans for private providers to open direct provision centres in regional towns have been met with protests from locals and anti-immigration activists.

Mr O’Gorman’s department has sought to reform the direct provision system and is seeking to replace the network of centres with a new system of accommodation and supports by the end of 2024.

A department spokesman confirmed the State has not bought any new centres since the briefing note was written. The spokesman said under the planned overhaul of direct provision, asylum-seekers who arrived into the country would initially be housed in a number of reception and integration centres.

Asylum-seekers will spend a maximum of four months in the reception centres before moving into housing secured through Approved Housing Bodies.

“These centres will be State-owned and purpose built to provide suitable accommodation for approximately 2,000 people at any one time, to cater for the flow-through of the 3,500 applicants over a 12-month period,” he said.

Attached by a strap to a safety lanyard, 27-year-old Nathan Paulin slowly progressed barefoot on a line stretched across the river between the Eiffel Tower and the Chaillot Theatre.

He stopped for a few breaks, sitting or lying on the rope. Paulin holds an umbrella as he performs, for the second time, on a 70-metre-high slackline spanning 670 metres between the Eiffel Tower and the Theatre National de Chaillot. (Photo by Sameer Al-DOUMY / AFP)

“It wasn’t easy walking 600 metres, concentrating, with everything around, the pressure … but it was still beautiful,” he said after the performance on Saturday.

He said obtaining the necessary authorisations had been a difficulty for him, plus “the stress linked to the audience, the fact that there are a lot of people”. Paulin, holder of several world records, performed the feat to celebrate France’s annual Heritage Day – when people are invited to visit historic buildings and monuments that are usually closed to the public.

He said his motivation was “mainly to do something beautiful and to share it and also to bring a new perspective on heritage, it is to make heritage come alive”.

He had already crossed the River Seine on a tightrope, on Heritage Day in 2017.