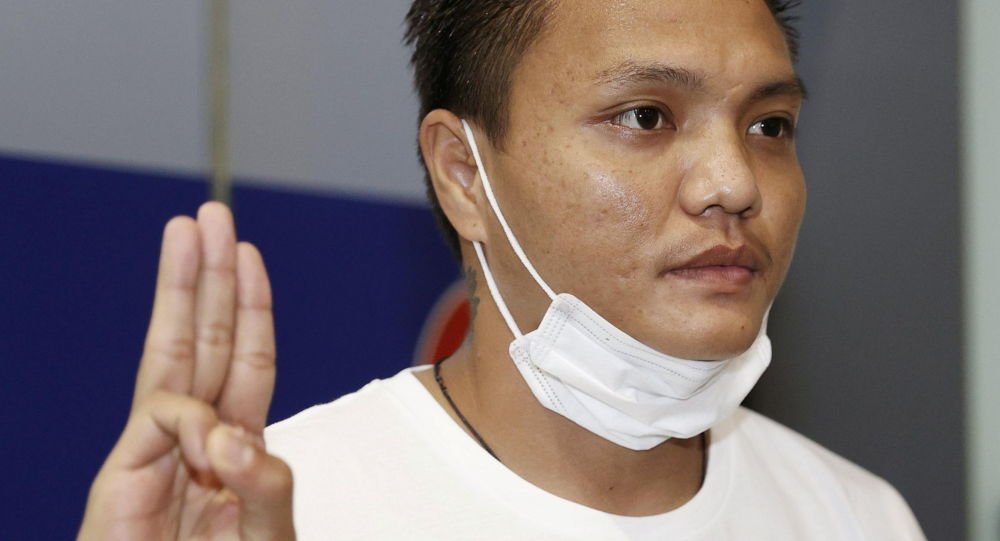 MOSCOW, (Sputnik) – Japan on Friday granted a six-month asylum visa to Myanmar goalkeeper Pyae Lyan Aung, who made an anti-coup gesture during a football match in Japan and chose to stay in the country over concern for his life, Kyodo news reported.

During a world cup qualifying match between Myanmar and Japan in Chiba city near Tokyo on 28 May, Aung was reported to have raised a three-finger salute in protest against the military coup in Myanmar, an action he said may have grave consequences to his life if he returns to Myanmar.

According to the media, the goalkeeper requested to remain in the country at Kansai airport on 16 June when his team was scheduled to exit Japan.

The Japanese government approved a six-month visa to allow the Myanmar goalkeeper to stay and work in Japan.

According to the Assistance Association of Political Prisoners, since the coup was staged in Myanmar on 1 February, an estimated 885 people have been killed by the junta, with over 5,195 people presently in detention.

Spain-Morocco diplomatic crisis: Yemeni asylum seekers deported from Ceuta: ‘After beating us up, they threw us out’ | Spain

Wednesday’s murders “appeared … to be an act of terrorism” Norway’s ‘PST’ intelligence service said Thursday, noting that the killer, Danish national Espen Andersen, had been a “known” threat. Andersen was a Muslim convert and extremist, but might also have had psychiatric problems, Norwegian police said. Norway’s terrorism-threat level was “moderate”, the PST added, while monitoring the risk of “follow-up actions, revenge actions” by either “extreme Islamists” or “right-wing extremists”.

The UN’s refugee agency (UNHCR) is facing questions over whether it is helping to detain Rohingya refugees in prison-like conditions by providing services on a controversial island camp.

Over the past year, Bangladesh has relocated almost 20,000 refugees to Bhasan Char, an island formed of silt deposits in the Bay of Bengal thought to be vulnerable to cyclones, which the refugees are unable to leave.

About 700 refugees have reportedly attempted to flee the island but Bangladesh hopes that the UNHCR’s cooperation will ensure better services for the refugees and is now planning to increase the island’s population by 80,000 over the next three months.

Refugees International, a global advocacy organisation, said there were “serious questions” about whether it was safe and possible to move such numbers to the island from the Cox’s Bazar refugee camps, which are the world’s largest, hosting about 890,000 refugees.

“Most concerning is whether any relocations of Rohingya refugees to the island will be truly voluntary, evidenced by the fact that hundreds of refugees relocated there have already tried to flee,” said Daniel Sullivan, Refugees International’s senior advocate for human rights.

“As Refugees International has warned in the past, failure to properly assess conditions and inform refugees about the move will result in policies more akin to detention than refuge.”

The Geneva-based Global Detention Project tweeted: “In signing a new memorandum of understanding with the Bangladesh government, is the UNHCR assisting in the detention of Rohingya refugees on Bhasan Char island? Are refugees free to move on and off the island? Are they moving there truly voluntarily?”

Human Rights Watch reported in June that the government had misled refugees about conditions on the island and that some had been relocated without informed consent. It also reported that, despite promises from the government of good living conditions, they did not have access to work or education and were unable to leave.

In May, during a visit by senior UNHCR officials to inspect the island, thousands of refugees defied orders to remain in their shelters to protest at the living conditions. The UNHCR later said it was “deeply concerned” that refugees were injured during the protest.

A Rohingya teacher living in the Cox’s Bazar camps said they opposed the UNHCR’s cooperation with the government because they did not believe the island was fit to live on.

“At least the government could consider free movement for the people who are in Bhasan Char, so they could travel to see their relatives.”

A leaked copy of the agreement offers no guarantee that refugees will be able to move freely to the mainland, Reuters reported on Friday.

Bangladesh has justified relocating refugees to the island by arguing that conditions are better than the overcrowded camps in Cox’s Bazar, which have witnessed devastating floods and fires this year.

The UN said, after the agreement with the government was announced last weekend, that its presence on Bhasan Char would “help support the refugees to lead decent lives on the island” by ensuring protection, education, healthcare and livelihoods.

Former UNHCR official Jeff Crisp questioned why the agreement between Bangladesh and UNHCR had not been published and whether it failed to ensure freedom of movement for the refugees, which could amount to it becoming a prison island.

He also questioned what the long-term plan was for the island, as little progress had been made towards ensuring the Rohingya can return safely to Myanmar, which several generations of refugees have fled after repeated military operations.

“I don’t know what strategy the Bangladeshi government is working on. What is the endgame? Do they assume people can live happily on Bhasan Char?” said Crisp. “They’re talking about 80,000 moving in the next three months. Are that number of people going to volunteer to go and, if they do, can you move that many people and give proper attention to settling them properly?”

Chinese prime minister Xi Jinping will not personally attend the ‘COP26’ climate summit in Scotland, UK prime minister Boris Johnson has been informed, British newspaper The Times reported Thursday. The no-show might mean China would not submit a ‘nationally defined contribution’ (NDC) on CO2-cuts either, British officials feared. Just half of the world’s ‘G20’ wealthiest countries have filed NDCs so far, amid a supply crunch in oil and gas markets.

How scientists in Ireland are using technology to predict the climate