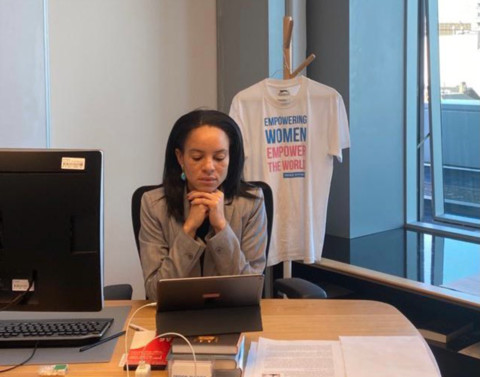 As former commissioner for trade Cecilia Malmström rightfully addressed, we need to empower women through trade.

By capitalising on gender equality efforts in EU policies, we have the chance to make sure trade does indeed benefit all and inclusive growth is possible.

The first steps are taking place, for example by including gender provisions in the EU-Chile trade negotiations. To understand how trade can better benefit women, Renew Europe has on Monday (12 April) launched a position paper on gender and trade.

The EU’s trade policy has the potential to empower women in areas where they cannot reach the same potential as men based on their gender.

To achieve this goal, understanding the various roles women have in trade is vital.

Women are entrepreneurs who manage their own business, they are employees at companies, and women are consumers. Considering these roles in trade through a gender lens leads to a more inclusive trade policy and better gender-mainstreaming of EU policies, such as the upcoming due diligence legislation.

As international research shows, countries that engage with international trade tend to have more gender-equality than less open economies. Trade policy is thus a powerful tool to create opportunities for women, if used properly.

Research also shows that women entrepreneurs have less access to finance than their male counterparts do.

This leads to fewer opportunities on the global market for their businesses.

Additionally, women have limited access to digital solutions and skills development, making them less innovative and competitive. This development is worrisome, as the digital transition will be key in the next decade.

To move forward, the EU can take a few steps.

A direct contribution is possible by incorporating a gender perspective in trade policy, and collecting gender-disaggregated data to understand how trade benefits women.

Including specific gender chapters in our agreements can function as a stepping stone for data collection, as well as providing a platform to discuss gender matters with our partners.

Furthermore, focussing on specific areas such as SMEs, digitalisation, and e-commerce can be particularly advantageous for women.

Gender-mainstreaming of aspects of trade policy can help women benefit from international trade at the same level as men. This will build a more resilient global value and supply chain, lead to more competitiveness on the world market, and eventually more gender equality.

Incorporating a gender perspective in the EU’s trade policy can function as a means to enhance the effectiveness of our trade agreements to the benefit of all – a crucial aspect of our post-Covid recovery.

‘My son could die’: the disabled Syrian refugees on the sharp end of UK aid cuts – photo essay | Global development

“Work is already underway for … disconnection of Russia from the Swift banking system, sanctions on the Russian gas pipeline Nord Stream 2 [to Germany],” if it invades Ukraine, Latvian foreign minister Edgars Rinkēvičs said in The Guardian Tuesday. “If [Russian president] Vladimir Putin wants to see gas flow through that pipeline, he may not want to take the risk of invading Ukraine,” US national-security adviser Jake Sullivan told Reuters.

Can artistic freedom survive in Sudan? The writing’s on the wall… | Global development

In the new dawn of a heady post-revolutionary era, Suzannah Mirghani returned in 2019 to the country of her birth for the first time in years. Her mission was to shoot a short film on Sudanese soil. It proved unexpectedly straightforward.

“When the revolution happened, there was this exuberance,” she says, from her Qatari home. “When we came to make our film, we were given the green light. We were told: ‘Anything you want’.

“Nobody harassed us. Nobody told us what to do. Nobody asked us for the script. I call this time in the history of Sudan ‘the honeymoon’,” says Mirghani.

More than two and a half years after the toppling of the longtime dictator Omar al-Bashir, Mirghani fears the honeymoon is over, at least for her. The turmoil into which Sudan has again been plunged means she feels unable to return safely.

On 31 October, as her film, Al-Sit, won the latest of many awards, Mirghani had to give an acceptance speech that was anything but celebratory.

Six days before, the military had seized power in a coup, detaining the civilian prime minister and bringing the country’s fragile transition to democracy to an abrupt halt.

In a video address from Qatar to the Africa in Motion film festival in Scotland, Mirghani said “the only reason” she and her crew had been able to make Al-Sit was the active encouragement given by the civilian-military partnership government. “Now,” she added, “we’re in very serious danger of going back to the bad old days of military rule and stifling creative expression.”

Since the coup, a lot has happened: huge pro-democracy protests thronged through Khartoum and other cities, with at least 40 demonstrators killed.

After almost a month, the prime minister, Abdalla Hamdok, was released as part of a deal struck with the coup leader, Gen Abdel Fattah al-Burhan.

But the protesters, who want the military out of politics for good, are not convinced, and even less so as security forces fire teargas into the crowds that continue to gather despite Hamdok’s return. With the creative gains made after the revolution now hanging in the balance, Sudanese artists feel they have to speak out.

“We artists will be the first to be targeted if the military government continues in power,” writes Aamira*, a painter, in an email from Khartoum. “We are demonstrating in the streets, facing guns, unarmed. There is nothing to fear any more.”

In an interview with the Financial Times last week, Hamdok defended his decision to strike a deal with the military, saying it was essential to stop the bloodshed and “preserve the achievements of the last few years”.

It may not have been uppermost in his mind, but one of those achievements was the flowering of an artistic community that had long been harassed, censored and forced into the shadows. Assil Diab, a street artist, says: “I painted Omar al-Bashir as the [face of] coronavirus in a stadium in Bahri during the daytime, which would have been just impossible; my whole family could have been killed two years ago.”

Feeling compelled to return amid the revolutionary fervour, Diab returned to Sudan in 2019 and made her name painting the faces of the revolution’s “martyrs” on the outside of their families’ homes, with a getaway car close by in case the notorious paramilitary Rapid Support Forces saw her.

For Mirghani, the “absolute elation” of the revolution yielded creative results. Al-Sit is the beautifully observed story of a Sudanese village girl whose parents want her to marry the sharp-suited son of a wealthy cotton trader in Qatar. “To finally be able to express yourself, to say what you had wanted to say to these people for 30 years: it’s amazing.

For the first time in 10 years, I’m in Sudan walking around, not scared of any police, or secret police

“My film is about women’s rights. It’s social commentary on arranged marriage. I don’t think we could have said that a few years ago,” says Mirghani.

The “honeymoon” was not without its challenges. The dictator was gone, but social and religious conservatism – and a reluctance to champion the arts – remained. Artistic freedom was patchy: in 2020, the renowned film-maker Hajooj Kuka and several others were detained during a theatre workshop.

Asim*, a documentary film-maker in Khartoum, says that, although in the capital the “direct censorship” of the Bashir era has eased, the rest of Sudan is not as relaxed. “It’s partially freedom and partially censorship,” he says. “It is a battle about 10% won.”

Khalid Albaih, a political cartoonist based in Qatar, returned after the revolution to launch the Sudan Artist Fund (SAF), to provide budding creatives with money and mentors, and with an ambitious plan to create a public art and design library. He says: “I thought: this is it. All doors were open and this is what we were going to do.

“I took all my papers, and for the first time in 10 years I’m in Sudan walking around, not scared of any police, or secret police, or anything. I went to every business owner in Sudan and everyone that can donate money to these causes. And I got nothing but rejection – for a library and for an artists’ fund.”

Finally, Albaih secured $7,000 (£5,300) from CultuRunners, a cultural exchange organisation, and the SAF awarded its first grant of $500 in October – just before the coup. “It was incredible because the internet cut out [after the coup leaders imposed a nationwide online blackout] so the artist didn’t even know he had won. We had to call him. It took two or three weeks to send the money to him,” says Albaih.

The cartoonist knows there will not be any more funding for a while. “Now everything is rocky. No one knows how things will go. It’s going to be really hard for artists and these kinds of initiatives to move forward.

The coup, says Diab, left the creative community feeling “disappointed and just broken down … because we finally thought we were free and then this happened.” She intends to apply for political asylum in the US, where she is studying, feeling she “can be of better use to Sudan” from overseas.

Those in the thick of it cannot afford to give up hope. Asim was at a protest in Khartoum against the post-coup deal last week and was “teargassed the entire afternoon” amid chants of “no partnership, no negotiation, no legitimacy”. He is realistic about future challenges but knows that people have made up their minds.

“I feel like there is a grip on power and it will not end today; it will not end tomorrow. Whether those power-hungry authoritarians will roll with democratic transition and allow people to express their freedoms, allow journalists and film-makers to operate or not, that is something that is still [up in] the air, because you never know with the ever-changing dynamic of power in this country,” he says.

The momentum towards democracy is undeniable, he says. “I believe that is possible and I believe there is hope. The people will not stop asking for what they really want. [Will] that future come tomorrow? The day after? In two years? In five? We never know. But it seems like the consensus is that people agree it has to happen.”

*Names have been changed to protect their identity

EU diplomats have provisionally agreed to blacklist three Russian nationals and one entity, the ‘Wagner Group’ mercenary outfit, on grounds of human rights abuses in Africa and the Middle East, diplomatic sources said. The decision will be formalised by foreign ministers next Monday. The move comes amid Wagner’s increasing presence in Mali, threatening French interests in the region. Europe earlier sanctioned a Russian oligarch, Yevgeny Prigozhin, said to fund Wagner.