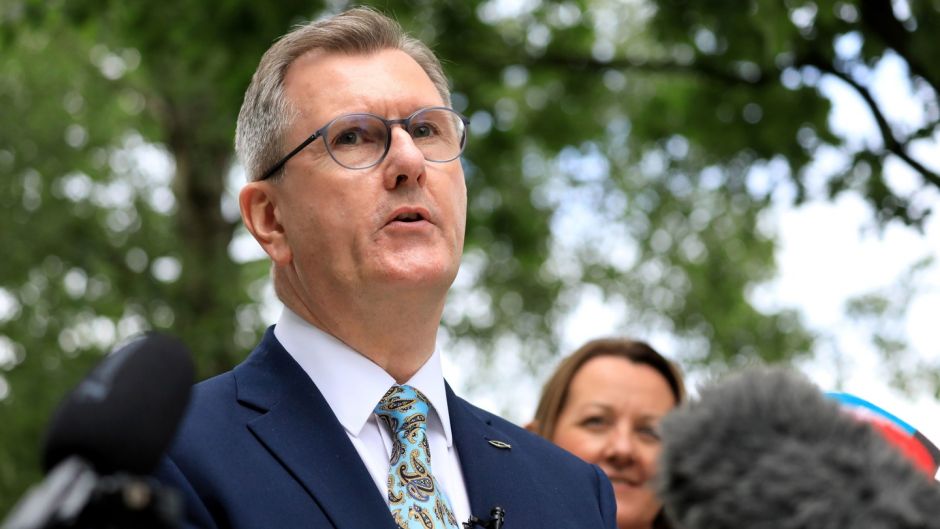 Four in every five voters in the North do not trust the Democratic Unionist Party over the Northern Ireland Protocol, a new survey suggests.

The poll results will concern incoming party leader Jeffrey Donaldson, as further findings signal the controversial post-Brexit arrangement will weigh heavy on the electorate’s minds at the next elections to the Stormont Assembly.

Mr Donaldson is to be formally ratified as party leader when the DUP’s ruling executive meets on Wednesday.

Pollsters LucidTalk, commissioned by researchers at Queen’s University Belfast, asked a weighted sample of 1,500 respondents from the electorate who they trusted and distrusted to manage the interests of the North when it comes to the Protocol.

The next least trusted group was the DUP, with 56 per cent distrusting them “a lot” and another 22 per cent responding that they simply didn’t trust the party over the Protocol. Just 13 per cent trusted the party.

A majority of voters (56 per cent) also distrust Sinn Féin over the issue — with 45 per cent registering “a lot” of distrust. Nearly a third (31 per cent) trusts the party.

Alliance Party (43 per cent) and the Social Democratic and Labour Party (42 per cent) were the most trusted parties, although both parties registered the same levels of distrust among the electorate.

Almost four in ten (39 per cent) distrust the Ulster Unionist Party. Giving new party leader Doug Beattie food for thought, almost the same proportion again have yet to make up their mind on whether or not they trust the party.

Distrust of the European Commission/EU was at 48 per cent, while 40 per cent said they trusted Brussels. Voters responded similarly over the Irish government’s role, with 48 per cent registering distrust against 38 per cent who trust Dublin.

Only business leaders (56 per cent) recorded majority trust among respondents.

Worryingly for some of the political parties in the North, given the high levels of distrust in them, the poll found three-quarters of voters will be mindful of the Protocol when casting their ballots in the next election.

Four in ten said they would switch allegiance over the issue.

Professor Katy Hayward, of Queen’s University Belfast and co-investigator on the research, said the findings show people in the North “highly exercised” by the Protocol — both for and against in equal proportions.

“The political tensions are compounded by the low levels of trust in the political parties when it comes to the Protocol, and by the fact that the Protocol is likely to feature heavily in the next Assembly election,” she said.

The findings show a majority believe special arrangements are needed for the North in the wake of Brexit, but there is a clear split on whether people support or object to the Protocol, with 47 per cent backing it, and the same number opposing.

Despite the split, a majority (56 per cent) agrees that it hands the North a unique set of economic opportunities.

Chief concerns are the cost of certain products, choice of goods as well as checks and inspections on goods moving between Britain and the North.

Most of those surveyed (57 per cent) want the UK to align with EU regulations as a solution.

Just 38 per cent favoured shifting checks and inspections to the Border.