Average life expectancy statistics for 2019 dropped in Spain by 1.6 percent and in Bulgaria by 1.5 percent due to the pandemic, according to European Commission data out Wednesday. Lithuania, Poland, and Romania also suffered falls of 1.4 percent each. Denmark and Finland were the only countries who saw a modest increase, of 0.1 percent each. But not all EU member states reported figures on time, blurring the overall picture. 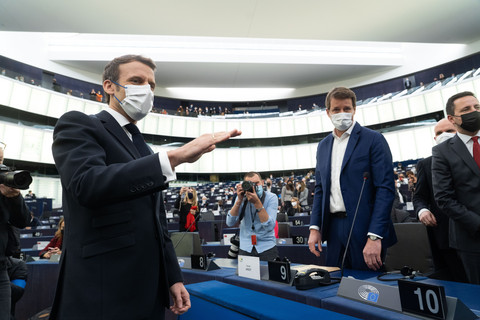 Immigration did not take centre stage in French president Emmanuel Macron’s speech in the EU Parliament in Strasbourg on Wednesday (19 January).

But what he did say emphasised keeping people out.

“We must protect our external borders, including by developing a rapid-intervention [military] force … to build partnerships with countries of origin and transit, to fight against [human-]smuggling networks, and make our return policy effective,” he told MEPs.

He voiced empathy for people “in great misery … and insecurity”, some of whom had walked from Africa or Asia to Europe, he said.

But Macron’s empathy had its limits. “It’s a horrendous humanitarian situation, but that’s reality,” he said.

And his speech was matched by his priorities on immigration for the next six months.

EU states should agree “common rules” on border “screening”, including “an obligation to ‘keep at the disposal of the authorities’ persons apprehended at the external borders, by increasing detention capacities,” France said in a memo to fellow EU states on 17 January.

Screening should include “health and safety checks” and fingerprinting, the memo said.

“The asylum procedure … would only be provided for in the later stages” of the security process, France noted.

These were the “core” measures France believed EU states could agree on by July, following months of consultations.

France also discussed how EU states could show “solidarity” with front-line countries, such as Greece and Italy, without taking in asylum seekers.

They could pay each other off or send border guards instead, France proposed.

But there was as little in the French memo on protecting migrants’ lives or welfare as there was in Macron’s speech.

The EU should offer “dignified reception and better integration of people in need”, the memo said, in its only words on the issue.

Record numbers of people drowned last year trying to cross the Mediterranean, while others froze to death in the forests of Belarus and Poland.

At the same time, EU countries carried out thousands of illegal “pushbacks”.

Some built new walls and razor-wire fences, while conditions at many Greek migrant camps remained dismal.

But for all the human “misery” involved, EU migration has become a political weapon ahead of French elections in April, where Macron is running against three right-wing contenders, among others.

“We cannot have a sieve-like Europe,” the centre-right candidate, Valérie Pécresse, said while on a visit to Greece last week.

And one far-right candidate, Marine Le Pen’s party spoke out in Strasbourg.

And some of these would also appeal to right-wing voters.

EU countries needed to tackle “the extremely sensitive nature of the notion of blasphemy, which rallies and mobilises all streams of the radical Islamist scene”, such as the lone knife-man who beheaded a French schoolteacher in 2020, France warned in a recent EU memo on terrorism.

It proposed a hawkish definition of antisemitism that was being used to demonise Israel’s opponents.

And for all the French concern on dialling down hatred, Macron’s vision of a secular Europe contained nothing on tackling Islamophobia.

For his part, French Green MEP Yannick Jadot took the French leader to task in heated, eyeball-to-eyeball comments in the Strasbourg chamber.

Jadot highlighted the death of a young Kurdish migrant in the English Channel.

“All that she wanted was to live and to love, Mr President … Why do you pull down the tents [in Calais migrant camps] every day?”, Jadot said.

But Jadot is also running in April and his intervention was just more French election fever for some MEPs, such as the Spanish leader of the socialist group, Iratxe García Pérez, who asked the Frenchman to cool his tone.

By 2050, a quarter of the world’s people will be African – this will shape our future | Edward Paice

In 2022 the world’s population will pass 8 billion. It has increased by a third in just two decades. By 2050, there will be about 9.5 billion of us on the planet, according to respected demographers. This makes recent comments by Elon Musk baffling. According to him, “the low birthrate and the rapidly declining birthrate” is “one of the biggest risks to civilisation”.

Fertility rates in Europe, North America and east Asia are generally below 2.1 births per woman, the level at which populations remain stable at constant mortality rates. The trajectory in some countries is particularly arresting. The birthrate in Italy is the lowest it has ever been in the country’s history. South Korea’s fertility rate has been stuck below one birth per woman for decades despite an estimated $120bn (£90bn) being spent on initiatives aimed at raising it. Japan started the century with 128 million citizens but is on course to have only 106 million by 2050. China’s population will peak at 1.45 billion in 2030, but if it proves unable to raise its fertility rate, the world’s most populous country could end the century with fewer than 600 million inhabitants. This is the “big risk” alluded to by Musk. The trouble is, his statement seems to imply that “civilisation” does not include Africa.

The populations of more than half of Africa’s 54 nations will double – or more – by 2050, the product of sustained high fertility and improving mortality rates. The continent will then be home to at least 25% of the world’s population, compared with less than 10% in 1950. Expansion on this scale is unprecedented: whereas the population of Asia will have multiplied by a factor of four in this timeframe, Africa’s will have risen tenfold. “Chronic youthfulness”, as demographer Richard Cincotta has termed it, is the result: 40% of all Africans are children under the age of 14 and in most African countries the median age is below 20.

African mothers will have about 450 million children in the 2020s. This is projected to rise to more than 550 million in the 2040s, about 40% of all children born worldwide in that decade. Overall, low or rapidly declining birthrates remain the exception rather than the rule in most of Africa. Globally, the number of births are at their highest level ever – 140 million a year – and are unlikely to fall by much in the course of the next two to three decades.

That is some bow wave underpinning future population growth, for good or ill (or both). With continuing high fertility in east, west and central Africa, the continent will contribute 1.3 billion of the 2 billion increase in the global population between 2019 and 2050. By then, the populations of east and west Africa will each exceed that of Europe. Thereafter, Africa’s varied demography will be one of the principal determinants of whether the global population will peak in the second half of the 21st century or continue growing, a vexed and contested issue with added significance in the age of the climate crisis.

Elon Musk’s population implosion narrative is not original. It echoes that of Dr HB McKlveen, warning of the “depopulation of civilised nations” in the Journal of the American Medical Association in 1895; and that of many western economists in the 1930s, John Maynard Keynes among them. More than 50 years after the publication of Paul Ehrlich’s bestselling The Population Bomb, explosion narratives also burst forth at regular intervals. To date, human adaptability and resilience have overcome demographic crises (such as the Black Death in the 14th century), and periodic alarmism. This is not intended to sound complacent or Panglossian, merely to caution that alarmist narratives are invariably touted for ideological or some other specific reasons. Beyond two or three decades, demographic futurology is fraught with pitfalls, although not nearly as hazardous as medium- and long-term economic or weather forecasting.

The omission of African demography from Musk’s pronouncement is symptomatic of colossal shortcomings in the understanding of Africa and its constituent countries in the west. African delegations are bit-part players at global gatherings like Cop26, despite the ramifications of the climate crisis for the continent (and its potential for countering deleterious effects). Western governments have been slow to cooperate with African counterparts in the battle to contain Covid-19, and have done woefully little by way of assistance. Africa remains fundamentally marginalised, including in stereotypical depictions in most western media and the imaginations of most western citizens. This lamentable state of affairs cannot – will not – endure.

Sheer weight of numbers must bring about a reimagining of African countries and their populations. This alone will impact geopolitics, global trade, technological development, the future of the world’s dominant religions, patterns of migration – almost every aspect of life. More widespread familiarity with the continent’s diverse demographic characteristics and trajectories is a good entry point to this reimagining. Oh, and it might also help to be ever-cognisant of the fact that the landmasses of China, the US, Europe, India and Japan can all fit inside this continent that will loom ever-larger in the lives of its neighbours and the world.

MEPs keen to speed up green-transition fund for poor

The EU should start paying out its €72bn fund for helping poor households shift to green energy in 2024, instead of 2025 as previously planned, according to a European Parliament proposal seen by Reuters. “The green transition should be feasible for everyone,” Dutch centre-right MEP Esther de Lange said. “The fund should not be used to buy Teslas …. but rather small- and medium-sizes cars for everyday families,” she added.

I’m can’t sell my flat due to cladding issues, will Gove’s proposals help me?