There’s no shortage of advice on how buyers, sellers, renters and landlords can get the best out of the housing market.

But are some of our certainties just old wives’ tales? We asked the real experts . . . 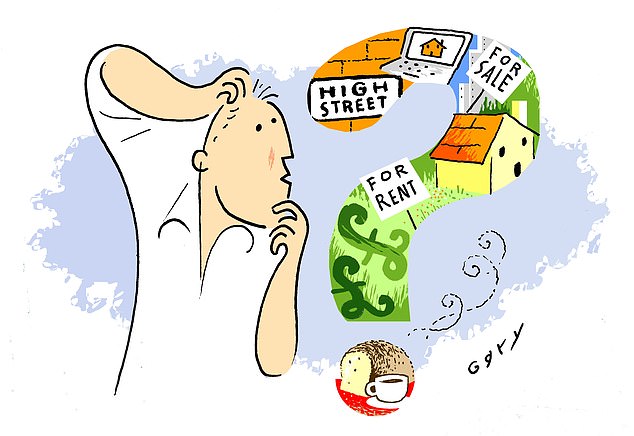 YOUR HOME WILL SELL FAST

Estate agents may tell the owner that their home will sell quickly in order to win the instruction to market the property.

‘Until you’ve had viewings there’s no way of knowing. Many properties will sell at the right price, but to get to that may take a little longer than anticipated,’ says Chris Mullin, of estate agency Hamptons.

Although you’ll pay less in charges to an online agent, you are likely to get a lower price for your property, which more than outweighs the saving in fees.

Studies show buyers make an in-principle decision to bid for, or reject, a property fast – often within 30 minutes or less. That’s why a smart exterior can set the tone for a successful viewing.

Quick decisions on purchases tend to be based on visual impressions, not smells. ‘Not everyone warms to them.

In Covid times, fresh air wins hands down. And at this time of year, if you have a fire, light it,’ says Sarah Cull, of Strutt & Parker.

MY STREET STARRED IN A FILM

‘People are so switched on, they’re unlikely to pay more for a property that’s been on the large or small screen,’ says James Greenwood, of Stacks Property Search. ‘A property linked with horrific events may make it harder to sell.’

Minimum government space standards don’t apply to many homes converted from old offices. ‘A 13 sq m flat – the area of a typical double bedroom – is not uncommon. Some are even smaller,’ warns a HomeOwners Alliance spokesman.

‘If they offer the asking price and are in a great position – no chain and finances in place – then don’t look a gift horse in the mouth,’ advises Paula Higgins, HomeOwners Alliance chief executive.

The Advisory calculates that a home put on the market in March will take 57 days on average before the seller accepts an offer. The typical time on market rises to a peak in October of 79 days on average.

STAMP DUTY USED TO BE HIGH

Stamp Duty was only 1 per cent and applied only to homes costing over £60,000 until 1997. It’s been rising ever since and before the current stamp duty holiday (until the end of June), buyers of some properties had to pay 18 per cent Stamp Duty.

On the market… solid investments