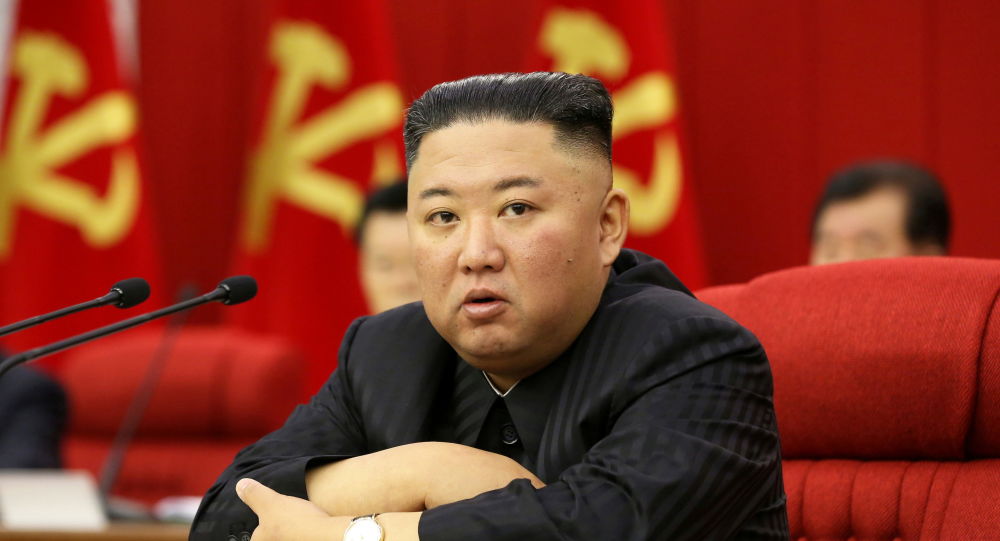 The exact cause of the “spot” on Kim’s head wasn’t immediately clear, as it would be somewhat problematic to diagnose it based on images alone.

North Korean head of state Kim Jong-un was seen last week sporting a strange “dark green spot” or possible bruise in the back of his head, NK News reports.

According to the media outlet, said spot was visible on Kim’s head during a “military event” he attended from 24 July to 27 July, and in the footage of “a war veterans conference and related events” that were held from 27 July till 29 July.

In some footage, that particular spot on Kim’s head was apparently covered with a bandage.

NEW: Kim Jong Un appeared with a dark spot on the back of his head during public appearances last week:

-Visible from July 24-27, absent on June 29
-Covered with a bandage in some footage
-Cause or nature of the large, dark spot or bruise is unknownhttps://t.co/WvwRGFME7J pic.twitter.com/oLwQCwTsJX

​The media outlet points out that, during Kim’s appearance at a politburo meeting held on 29 June, there were no signs of that mark on his head.

The cause of the spot in question wasn’t immediately clear, as it is “difficult to diagnose using only images”, NK News points out.

Maj Gen Ahmed Nasser al-Raisi’s ascent through the ranks of the interior ministry in Abu Dhabi is associated with the United Arab Emirates’ transformation into a hi-tech surveillance state.

His personal achievements include a diploma in police management from the University of Cambridge, a doctorate in policing, security and community safety from London Metropolitan University and a medal of honour from Italy.

Now, in a big soft-power win for the UAE and its attempt to legitimise its policing methods internationally, he has been elected the president of the global policing organisation Interpol – to the dismay of human rights defenders.

Often photographed smiling, Raisi is the longstanding inspector general for the interior ministry, responsible for the supervision of detention centres and policing. Multiple former detainees accuse him of using this position to green-light abuses, including torture.

“Raisi’s rise to the Interpol presidency legitimises the role and conduct of security forces in the UAE,” said Matthew Hedges, a British academic and expert on the Emirates who was detained there for seven months on espionage charges. Hedges, who was eventually pardoned, says Raisi was responsible for his arrest and also oversaw the torture he says he suffered in detention.

“This translates to a green light for states to continue acting in a way that abuses accountability and human rights, legitimises the dilution of rule of law and emboldens authoritative and abusive systems of detention,” Hedges said. “This is really a warning to the international community that cross-border abuses can and will occur.”

The Gulf state has previously said Hedges was not subjected to any physical or psychological mistreatment during his detention. On Thursday its interior ministry heralded Raisi’s win as “recognition of the vital role of the UAE all over the world”.

“The UAE,” it said, “is now at the helm of this international organisation working in the fields of security and policing and will do its best to make the world a safer place.”

In an unusually public campaign for the role, Raisi boasted of technological transformations that overhauled policing and surveillance in the UAE. These included the introduction of iris and facial scanning technology, and the creation of the interior ministry’s first “general directorate of happiness”.

His domestic policing changes underpin Abu Dhabi and Dubai’s status as two of the world’s most surveilled cities. One system, called Falcon Eye, deploys thousands of cameras to monitor not just traffic violations but also “behavioural issues like public hygiene and incidents like people gathering in areas where they are not allowed to”, according to a report by the state news agency WAM.

Abdullah Alaoudh, from the Washington DC organisation Democracy for the Arab World Now, said the UAE had been applying a two-pronged approach epitomised by Raisi’s Interpol win: “Cracking down hard on every voice of dissent, while investing in public relations like lobbying, soft power, sports and entertainment.”

Christopher M Davidson, the author of a book on statecraft in the Middle East, described Raisi as an example of “high-performing technocratic members of UAE political society” who had found success under Crown Prince Mohammed bin Zayed Al Nahyan.

“The key to the regime of Mohammed bin Zayed has been to get things done, to stamp out corruption. Despite all criticisms levelled at the UAE and Abu Dhabi today, it is a far less corrupt place than it was 15 years ago. These were the people entrusted to clean up ministries,” said Davidson.

Stamping out corruption has, at times, included arresting the wealthy and critics. Khadem al-Qubaisi, a former adviser to the royal family and a businessman who said he was “scapegoated” by the Abu Dhabi authorities for embezzling millions, is detained in Al Wathba prison. The prison, overseen by Raisi, also holds the human rights defender Ahmed Mansoor.

Riyaadh Ebrahim, who spent more than a year in the prison, said he witnessed torture there. “There is wrongful imprisonment, no application of the rule of law. People are being persecuted for crimes they did not commit,” Ebrahim said. He said he was “totally appalled” by Raisi’s victory in the Interpol election race.

Davidson said the UAE was using its wealth and resources to buy reputational shortcuts on the international stage.

“Policing in the UAE still has its problems, but this is a way of saying to the world that [they] are credible and respectable,” he said. “Obtaining the presidency of Interpol symbolises moving in the right direction.”

Jalel Harchaoui from the Geneva-based organisation the Global Initiative Against Transnational Organized Crime said Raisi’s election highlighted the struggle between liberal and illiberal nations within international institutions such as Interpol, and was a victory for anti-democratic countries.

“On the surface, Abu Dhabi – thanks to excellent soft-power outreach – markets itself as a modern state, which happens to be a dependable friend to all the major western democracies,” he said. “In reality however, the Emiratis, whose governance style has been partly inspired by China’s strict form of authoritarianism, always campaign against liberalism and its key principles.”

A spokesperson for the UAE embassy in London did not respond to a request for comment.

French president Emmanuel Macron urged Polish president Mateusz Morawiecki to solve a rule-of-law dispute with the EU, while voicing solidarity on the Belarus migration crisis, in a meeting in Paris on Wednesday. Poland should “find a solution that safeguards the core values of the European Union”, Macron’s office said. Russian president Vladimir Putin told EU Council president Charles Michel by phone extra EU sanctions on Belarus would be “counterproductive”.

Human rights activists have accused Turkey of using its role as host of Interpol’s general assembly to push for a crackdown on critics and political opponents who have fled the country.

The alert came after the Turkish interior minister, Süleyman Soylu, said his government would use the three-day event in Istanbul to persuade the international criminal police organisation’s officials and delegates to find, arrest and extradite Turkish dissident citizens – particularly those it labels terrorists – abroad.

There have also been growing concerns about politically motivated abuse of Interpol in the US Senate where a new bill aimed at ending the organisations’ misuse to “pursue, harass or persecute political opponents and dissidents with trumped up criminal charges” was introduced in July.

There has been angry reaction to the appointment of Ahmed Nasser al-Raisi, an Emirati general accused of torture, as the new president of Interpol. Al-Raisi was elected to the position on Thursday despite the alarm being raised over his candidacy by foreign leaders. The UAE has also been accused of abusing the red notice system to pursue dissidents.

The Turkish president, Recep Tayyip Erdoğan, told the opening session of the 89th Interpol general assembly on Tuesday that he expected “strong cooperation” in the extradition of people suspected of following the US-based Islamic preacher Fethullah Gülen and the PKK, the Kurdish movement.

On Wednesday, Interpol secretary general Jürgen Stock told journalists the organisation would not act on requests motivated by anything other than policing issues.

“If member countries decide to use Interpol they have to apply to our rules and standards. If a red notice has a predominantly political background we don’t take any action. If it’s political we’re out … we respect and protect human rights,” Stock said.

Interpol has rejected almost 800 red notice requests from Turkey in the past five years, an Interpol spokesperson told the Guardian, insisting that each request was rigorously checked. But critics from the Turkish Democracy Project claim some exiles have been unjustly threatened with arrest and extradition by the organisation.

“We are a policing organisation not a political one but we’re not blind to issues of geopolitics,” Interpol said.

“The committee carefully checks applications from countries where we know there might be a problem. We have a taskforce that reviews every single red notice request from every member country to make sure its compliant. We put a lot of resources and effort into making sure the red notice system is respected.”

In August, the Stockholm Center for Freedom, a non-profit advocacy organisation promoting the rule of law, democracy and human rights and focusing on Turkey, accused the Erdoğan regime of having “weaponised” Interpol for its wider campaign of repression against critics, human rights activists and ethnic or religious minorities abroad.

It added: “Turkey abuses Interpol in various ways. The International Notice System, such as red notices and diffusions, are used to target political opponents who have committed no crime other than being critical of President Erdoğan’s government.

“Turkey is also accused of manipulating Interpol’s Stolen and Lost Travel Documents database (SLTD) by filing tens of thousands of cases for critics and opponents who, in many instances, are not even aware that their passports have been invalidated.”

Campaigners are also concerned about Syria’s recent readmission to Interpol after it was banned for human rights abuses and war crimes fearing the Damascus regime will attempt to sabotage legitimate asylum claims abroad. Russia, China and Iran have also been accused of misusing Interpol’s red notices.

Interpol was set up in 1923 mainly to ensure criminals could not with impunity flee the country where their crime was committed. The organisation enables law enforcement agencies from its 194 member states to share data on crimes and criminals and issue arrest warrants.

Madeleine Joelson, executive director of the Turkish Democracy Project, said: “Interpol – once a bastion of law and order – has become a tool of transnational repression. Erdoğan, along with Vladimir Putin and Xi Jinping, continues to abuse and degrade the liberal international order – distorting its true purpose and undermining its credibility.”

Happy in Hexham: We visit the Northumberland town voted the jolliest place to live

What happens when we ‘power through’ burnout?

Everybody over 16 to get booster shots following Niac recommendations