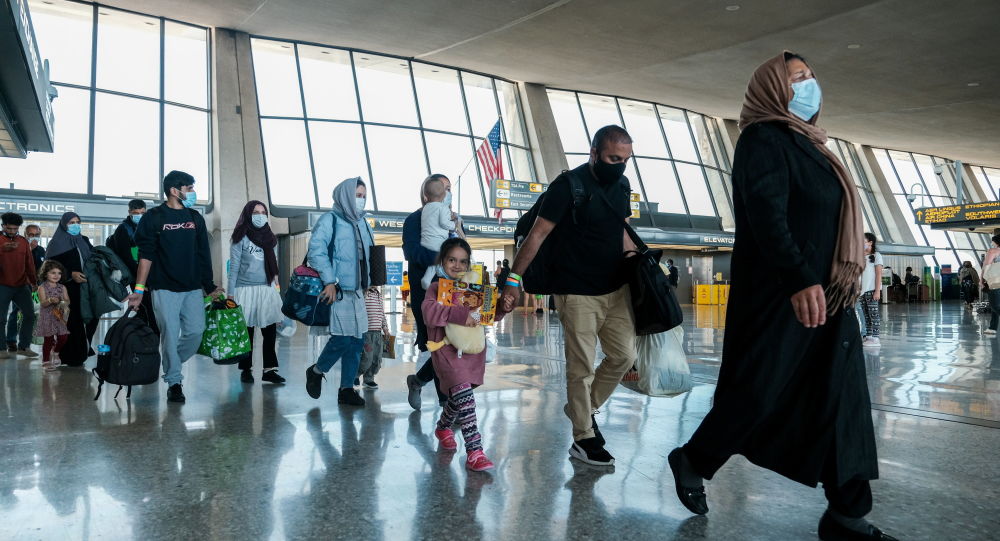 The US and its allies have entered the final phase of the evacuation of their citizens, along with those Afghans who want to leave their country now that it is controlled by the Taliban* military movement. All efforts are now said to be focused on distributing rescued Afghans.

Some Afghan refugees have been “flagged for concern” by the US Customs and Border Protection (CBP) following security checks and screenings in American military bases worldwide, the ABC News reported on Saturday, citing officials from several US security agencies.

The process is reportedly facilitated by the FBI, the Department of Homeland Security and the State Department, whose officials, during a call on Friday, discussed the process of the security checks.

The CPB has been said to provide personnel to foreign bases, where Afghans are primarily transferred for vetting and other checks to detect threats and potentially dangerous people who “could use the relocation process as a way to introduce operatives intending to conduct an attack within the homeland,” according to acting head of the DHS Office of Intelligence and Analysis, John Cohen.

Cohen added that agencies are also monitoring possible extremism in the US against the refugees, as there are concerns over “violent activities directed at immigrant communities, certain faith communities or even those who are relocated to the United States.”

Women and children wait for a document check after disembarking from the last plane arriving with Afghan refugees via Tashkent at the airport in Frankfurt, Germany, August 27, 2021

Currently, the US and other NATO member countries continue to remove their personnel from Afghanistan, alongside Afghan allies. The evacuation is expected to conclude by the 31 August deadline, and has raised questions about housing for thousands of Afghan asylum seekers. The process of vetting has sparked controversy amid claims that US agencies have “no real idea” about who they are letting into the country.

Washington has not yet announced how many residents of Afghanistan the US will accept. The US was earlier said by some to be taking in an estimated 15,000 refugees. According to an official statement by Pentagon spokesman John Kirby, the US will temporary house some asylum seekers at military bases, including Fort Bliss in Texas and Fort McCoy in Wisconsin. Reports suggest that as many as 22,000 Afghans, and their families, have applied for special immigration visas.

The Fort Lee base in Virginia has become provisional asylum for an unidentified number of Afghans. Reports have suggested that by this weekend, the total capacity of American bases would expand to 55,000 refugees by the time the evacuation is completed, according to The Progress-Index.

According to the latest estimates, the US and its allies have reportedly evacuated over 100,000 people from Kabul. Last week, US President Joe Biden announced that NATO countries would be expected to take in up to 65,000 additional refugees.

*Taliban is a terrorist organization outlawed in Russia and many other countries.

Afghanistan: Spanish operation to evacuate Afghan collaborators from Kabul due to end on Friday | International

The European Commission unveiled on Wednesday a proposal to digitalise EU cross-border justice systems, aiming at making them more accessible and effective. Under the new draft law, the EU executive wants to tackle inefficiencies affecting cross-border judicial cooperation and barriers to access to justice in cross-border cases. Shifting paper-based communications to electronic formats would save up to €25m per year across the EU in postage and paper costs.

The coronavirus pandemic had a radical effect on migration, limiting movement despite increasing levels of internal displacement from conflict and climate disasters, the UN’s International Organization for Migration said in a report on Wednesday.

Though the number of people who migrated internationally increased to 281 million in 2020 – 9 million more than before Covid-19 – the number was 2 million lower than expected without a pandemic, according to the report.

“We are witnessing a paradox not seen before in human history,” said IOM director general, António Vitorino. “While billions of people have been effectively grounded by Covid-19, tens of millions of others have been displaced within their own countries.”

Internal displacement caused by violence, conflict and disasters increased to 40.5 million from 31.5 million. Globally, the IOM said governments implemented a total of 108,000 restrictions on international travel, alongside internal restrictions on movement, disrupting migration during the pandemic.

Prior to the report’s release, Vitorino told IOM member states on Monday that international cooperation was needed to ensure people were not stripped of the option of migrating when they needed to.

He also pointed out that people from countries with low levels of vaccination could be excluded from emigrating. “We must acknowledge the deep impacts the Covid-19 pandemic has had for people on the move: people stranded in transit, families separated across borders, migrants left unemployed but unable to afford the return home,” said Vitorino.

“The resulting complex patchwork of measures, frequently changing in scope and application, has placed a chilling effect on cross-border mobility, particularly for those unvaccinated.”

The report said conditions were particularly harsh for people from developing countries working in the Middle East and south-east Asia, with the pandemic affecting their incomes and housing, while they were also often excluded from access to healthcare and welfare.

However, the feared 20% drop in remittances – which can be a key lifeline to poor families during crises – that was predicted by the World Bank in April 2020 did not materialise and had been much lower, at 2.4%. This might be partly related to people being forced to send money to their families through formal routes, the report suggested, because options such as carrying cash were blocked off, as well as many working in jobs on the frontline of the pandemic that continued despite lockdowns.

Poland’s president on Tuesday (30 November) signed into law legislation that will limit the access of aid charities and journalists to its border with Belarus as the country grapples with a simmering migrant crisis, Reuters reports. The law is a blow to the opposition parties that advocated for unlimited media access, an amendment approved by the upper house of parliament on Friday but rejected by the lower house.

Players should be allowed to compete in Saudi International