More than 16,000 expired AstraZeneca Covid-19 doses are to be destroyed in Malawi as concerns over vaccine hesitancy increase.

The vaccines are among 102,000 doses donated by the African Union (AU) to the Malawian government last month.

Health campaigners are concerned that the possible link with rare cases of blood clots and rumours that people were being given out-of-date doses of the vaccine were putting people off coming forward.

Currently, about 230,000 doses have been administered, enough to vaccinate nearly 1% of the population. As well as doses from the AU, the country received more than 400,000 AstraZeneca shots from Covax and the Indian government.

Initially, Malawians responded to the vaccine enthusiastically, with long queues at vaccination points and hospitals since the rollout began last month. But numbers have dropped off.

“From what I know, vaccine hesitancy has contributed to reduced uptake,” said Dr Ben Chilima, director of the Public Health Institute of Malawi. “I know some people did not go for the vaccine because of the hesitancy. There are some people who hesitate because they want to understand, other people because of religion and some people who simply think, ‘I will go tomorrow’.

“In the last week, people were also spreading messages that they will receive the expired vaccine, causing damage to the effort of the government.”

News that the AU has decided to halt plans to procure the AZ vaccine has not helped, despite it insisting the decision was not linked to concerns over blood clots.

George Jobe, executive director of Malawi Health Equity Network, said: “We wished all the vaccines had been administered to Malawians, so we’re very concerned.

“In the country, especially in rural areas, people are still clinging to the negative information about the vaccine. We should remember that there has been misinformation on the vaccine, and now we’ve experienced the danger of such messages.”

Jobe said people should follow expert advice, and not listen to rumours.

“This is a lesson to our donors that when giving donations, they should consider how prepared the nation is. Are people aware and ready to get the vaccine? The next vaccinations should not come within a few weeks before the expiry date because the same things will be happening,” he said.

The ministry of health has assured people that it will dispose of all expired doses.

The former deputy head of Europe’s border and coastguard agency has said the state of the beleaguered force “pains” him and that it is vulnerable to the “alarming” rise of populism across the continent.

In his first interview since leaving office, Gil Arias Fernández, former deputy director at Frontex and once tipped for the top post, said he was deeply worried about the agency’s damaged reputation, its decision to arm officers, and its inability to stop the far-right infiltrating its ranks, amid anti-migrant movements across Europe.

“Weapons are not needed for Frontex operations,” he said. “They are more of a problem than a help.”

Frontex is experiencing the most acute crisis in its 16-year history. The agency is being investigated by the European parliament over allegations of illegal pushbacks of migrants and refugees in the Mediterranean and its head, Fabrice Leggeri, is facing calls to quit over allegations he misled the EU commission. Leggeri has strongly rejected allegations about the agency’s operations.

Arias Fernández, 65, now retired, lost out on the top role to Leggeri in 2015. He admits he did not get on with Leggeri when they worked together for a year.

“From the first moment I saw that he had a perhaps excessive eagerness to change things. Maybe it was to put his personal stamp on things,” said Arias Fernández.

He said decisions made by one of the EU’s most powerful agencies had led to complicity in human rights violations.

“Frontex pains me,” he said. “Especially for the staff, because they don’t deserve what they are going through. We saw the agency as an instrument to help the member states and the migrants. These events put a dent in all that effort.

“I do not believe that the agency has proactively violated the rights of migrants, but there are reasons to believe that it has turned a blind eye.”

In January 2015, after the attacks on Charlie Hebdo in Paris, several European politicians suggested the presence of refugees among the terrorists.

When the media asked Frontex about any link between refugees and the Paris attack, Arias Fernández, a former police commissioner in Spain, told them there was no evidence.

Arias Fernández believes this cost him the director’s job.

The political pressure made the job a tough one, Arias Fernández said. “There is a lot of pressure on the part of certain states to put their people in positions of responsibility. Whether the agency is headed by a Frenchman or a Finn may determine whether there is more or less sensitivity to migration problems. The agency is independent, but ‘independent’ should be put in quotation marks because without a fluid relationship with the [European] commission, you have a hard time.

“Operations have always been conducted unarmed and there have never been any problems. In operations where Libyan tribal clans smuggling migrants shot in the air to frighten the patrols, even there it was not considered appropriate to carry weapons. In this case, weapons are more a problem than a help. The proposal of carrying weapons came from the European Commission, which I do not know to what extent is influenced by lobbyists in Brussels.

“There is no filter in the recruitment system. You cannot prevent people with extremist ideas from entering, unless they clearly express their position in favour of hate crimes, xenophobia and racism.”

Arias Fernández pointed to the dearth of human rights training for Frontex officers. “But lack of information should not be used to justify certain things,” he said. “The incidents under investigation were carried out by Greek units following the instructions of their commanders.

“When there are irregularities like this in operations, it is usually because there are instructions from the authorities responsible for coordinating the operation. The decision to turn back a boat with migrants is not taken by an officer but is an order from above.”

He said he appreciated borders needed a certain level of security to know who was entering but added that immigration was vitally important for the survival of all European states.

“I come to this conclusion because there are studies that show that if we do not resort to immigration and other incentives, the EU will have serious problems and the welfare state will be a chimera. We should learn these lessons. In the first half of the pandemic, migrants saved our bacon.

“In Europe, movements that use populism are growing at an alarming rate, and the fight against immigrants is one of those arguments. States are excessively prudent in not touching this issue. The commission presented the new pact on migration and asylum, which contains no proposals for channelling migration through legal channels. They tried to satisfy all the blocs, Visegrád [Czech Republic, Hungary, Poland and Slovakia], southern states, northern states, and I fear that in the end it satisfies no one.”

Arias Fernández said the lack of migrants being allowed into Europe would have a severe economic impact amid an ageing workforce: “Who will pay the pensions of the growing number of pensioners?”

A Frontex spokesman denied the agency ignored migrants’ rights. “The executive director of Frontex has written several letters to the Greek authorities to address incidents that raised his concerns. Two inquiries, including one that was conducted by representatives of national authorities and the European Commission, have found no evidence of violations of human rights in Frontex operations in Greece.”

The spokesman also denied that officers had always conducted operations while unarmed, saying: “Before this year, Frontex relied exclusively on officers provided by national authorities, who brought their own weapons to the agency’s operational activities. Today, Frontex has its own operational arm, the standing corps, whose core is made up of officers directly employed by the agency who require weapons for self-defence and to protect others.

“Since Mr Arias left more than half-a-decade ago, Frontex has undergone a massive transformation that included a much bigger focus on cross-border crime, which means a greater chance that our officers may encounter life-threatening situations while patrolling the borders or performing other duties.”

Hungary’s ruling nationalist party has submitted legislation to ban content it sees as promoting homosexuality and gender-change to minors, Reuters reported. The draft law would ban LGBTIQ literature for under-18s, including educational material, and advertisements deemed to be promoting gay rights. The vote will take place next Tuesday. Prime minister Viktor Orbán’s government has been taking aim at the LGBTIQ community ahead of elections next spring. 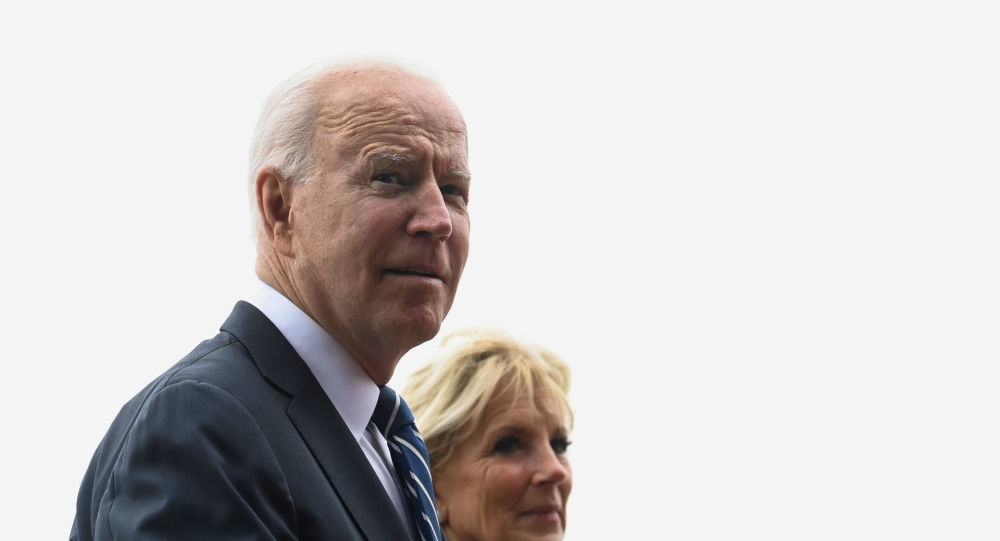 Biden’s predecessors – Donald Trump and Barack Obama – too violated rules when meeting members of the Royal Family. The Republican and his wife Melania shook hands with Queen Elizabeth II and her late husband Prince Philip instead of curtsying and bowing, while the Democrat made a speech over the UK’s national anthem.

US President Joe Biden violated royal protocol while attending a G7 dinner reception in the United Kingdom, the Daily Mail has reported, citing Debrett’s, a leading authority on royal etiquette. According to the newspaper, the protocol states that all guests must arrive at the venue before royals and no guest should leave an event before members of the “Firm” (nickname for senior members of the Royal Family and their staff).

The Democrat and his wife Jill arrived five minutes after the Queen got there with Prince Charles and the Duke and the Duchess of Cambridge. However, it appears that the faux pas by the US president didn’t affect the meeting as the monarch seemed happy when she greeted Joe Biden and First Lady Jill.

Queen Elizabeth II speaks to US President Joe Biden and his wife Jill as she attends a reception at the Eden Project with Prime Minister Boris Johnson and #G7 leaders, during the G7 summit in Cornwall. #G7Cornwall 📸 Jack Hill pic.twitter.com/znVT4pTF4q

​Reports say the presence of the Royal Family was crucial as British Prime Minister Boris Johnson is attempting to sign a post-Brexit free trade deal with the United States.

Biden became the 13th sitting US president to meet with Queen Elizabeth II during her 69-year reign. The monarch has met every US president since Dwight Eisenhower, except for Lyndon B Johnson, who did not visit the United Kingdom during his time in office.

While posing for a group photo with other G7 leaders, Queen Elizabeth cracked a joke. “Are you supposed to be looking as if you’re enjoying yourself”, the monarch said making leaders chuckle.

‘Are you supposed to look as if you are enjoying yourselves?’ – the Queen makes the leaders laugh tonight, taking centre stage pic.twitter.com/5KvwzKh6g0

​This was the first time the Queen, 95, has met foreign leaders since the beginning of the pandemic and the first major official engagement since the death of her husband Prince Philip.

Where are the most expensive streets in England and Wales?

David Eagleman: ‘The working of the brain resembles drug dealers in Albuquerque’ | Neuroscience