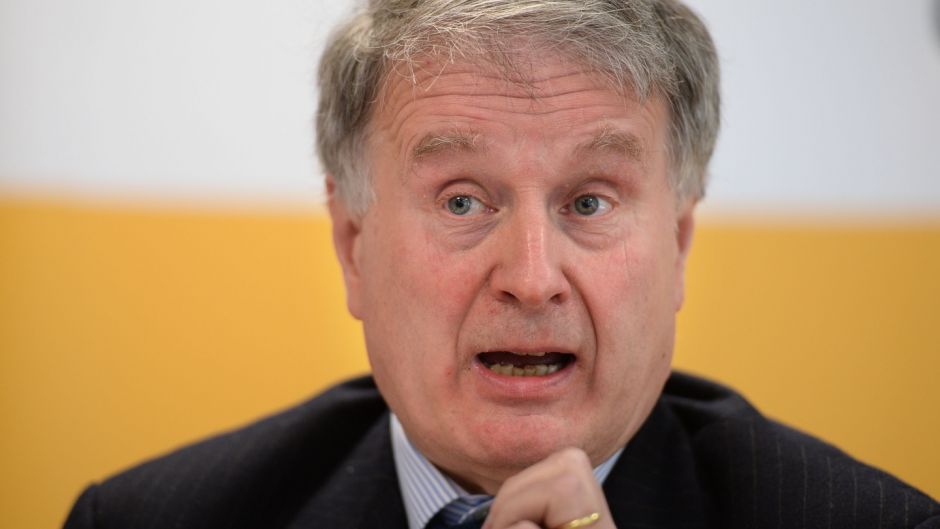 The judge who manages personal injury litigation in the High Court argued against the adoption of new guidelines designed to reduce the level of such awards.

Mr Justice Kevin Cross and his High Court colleague Mr Justice Anthony Barr spoke against adopting the guidelines at a remote meeting of the Judicial Council on March 6th last, according to minutes of the confidential meeting.

Mr Justice Donal O’Donnell of the Supreme Court and Mr Justice Michael MacGrath of the High Court spoke in favour of the guidelines. Mr Justice MacGrath is a member of the board of the Judicial Council.

The council comprises the more than 160 judges in the State. In the run-up to its vote on March 6th on the new guideline proposals, confidential documents were circulated amongst the judges arguing for and against the new regime for personal injury awards.

A majority of council members – 146 of 168 – participated in the meeting, with 83 voting in favour of the guidelines and 63 voting against.

Mr Justice Cross has since noted that the new guidelines “do not change the law”. He said judges are still required to assess damages that are “fair and reasonable” in individual cases.

The minutes, released under the Freedom of Information Act, show that the Chief Justice, Frank Clarke, told the meeting he would raise the issue of more judges being required for the District Court if the guidelines had the effect of increasing the volume of business in that court.

One of the expected effects of reducing the awards for lower- and medium-range injuries under the guidelines is that many personal injury cases will be heard in a lower court than has been the case up to now.

The Government is hoping that the new guidelines, along with a suite of other measures, will lead to a reduction in the price of insurance premiums, not least for small and medium-sized businesses and civic and cultural organisations that are struggling to pay for public liability cover.

The guidelines now apply to new litigation and to claims before the Personal Injuries Assessment Board that have not yet been assessed.

The Judicial Council has an 11-member board comprising the Chief Justice and the presidents of the Court of Appeal, High Court, Circuit Court and District Court, as well as six other judges.

Minutes of board meetings show that a document arguing in favour of the guidelines, circulated to judges prior to the March 6th vote, was a “majority board view” and not supported by all the members.

The document was based on one produced by the President of the High Court, Ms Justice Mary Irvine, in response to a submission from Mr Justice Bernard Barton, according to the minutes.

On March 4th, two days before the council vote, the board had discussed what would happen if the draft guidelines were not supported.

“It was agreed that a virtual break-out room be arranged so that if required the board could meet separately and discuss this on March 6th,” the minutes of that meeting show.

It was also agreed at the March 4th meeting that the interim secretary of the council, Kevin O’Neill, would “write to those members who had submitted papers in opposition to the draft guidelines on behalf of the chairperson requesting that two speakers be nominated for a set amount of time to address the meeting”.

‘Deviance and morality’: The history of the same-sex marriage movement in Switzerland

The 56-year-old historian still recalls his run-ins with “suspicious” real estate agents in Switzerland, where police in some places were still keeping registers of homosexuals.

Three decades later, in a referendum on Sunday, the wealthy Alpine nation looks set to allow same-sex couples to marry, and grant them the same rights as their heterosexual counterparts.

“It is a huge step forward,” said Delessert, an expert on the history of homosexuality in Switzerland at Lausanne University.

READ MORE: Broad support for same-sex marriage ahead of referendum

The country decriminalised homosexuality in 1942, but numerous local and regional police forces continued to keep “gay registers”, some into the early 1990s.

These registers were aimed at “controlling deviance and morality”, Delessert explained, adding that they had dire impacts on the lives of those listed.

“If a supposed homosexual was convicted of theft, his homosexuality was submitted as additional proof of his immorality,” he said.

But the causes of the discrimination remained unsaid: the registers were never made public, and those listed there were never informed.

Only Zurich and Basel publicly announced that they were scrapping the registers, in 1979 and 1980, Delessert said, voicing frustration that all the other registers had simply vanished.

He said he had managed to find handwritten notes on police documents where officers requested the creation of “files” on homosexuals arrested after committing an offence.

Delessert said he had also found testimony from a commissioner mentioning that around 200 homosexuals were registered in Zurich each year.

Zurich’s official records division told AFP that these registers had been kept for internal police use, and had been destroyed.

An account by a whistleblower published in the Swiss media in April 1990 first alerted the public to the existence of one of these registers, in Bern, with the outcry pushing authorities to halt the practice.

When contacted by AFP, Bern cantonal police said they had searched internally, but “were unable to find information about this register, which apparently existed.”

“At an ethical level, it is difficult to comprehend today.” While such statements are welcome, Delessert highlighted that “the political authorities have never apologised” for the practice.

But he hailed the political turnaround in recent years. A referendum early last year opted to criminalise acts of homophobia, and towards the end of the year, parliament voted to legalise same-sex marriage.

That law aimed to finally bring Switzerland in line with much of Europe on gay rights.

But opponents of the law demanded a referendum within the country’s direct democratic system, in a bid to block it.

Recent polls however show that a large majority of Swiss voters back changing the law.

Same-sex couples can already register a civil partnership in Switzerland, but that status does not provide the same rights as marriage.

Allowing same-sex marriage would fix that, enabling foreign spouses in same-sex relationships to apply for citizenship through a simplified procedure, and allowing same-sex couples to jointly adopt children.

And it would controversially give lesbian couples access to sperm donation.

The opponents, mainly drawn from the populist right-wing Swiss People’s Party, have plastered Swiss cities with stark posters decrying the commodification of children and warning the law will “kill the father”.

One of their posters shows a crying baby with its ear tagged like cattle, and the question: “Babies on demand?”

Another featuring a huge zombie-like head, meant to represent a dead father, was covered over by a nearby primary school in Wallis canton out of fear it would frighten the children. 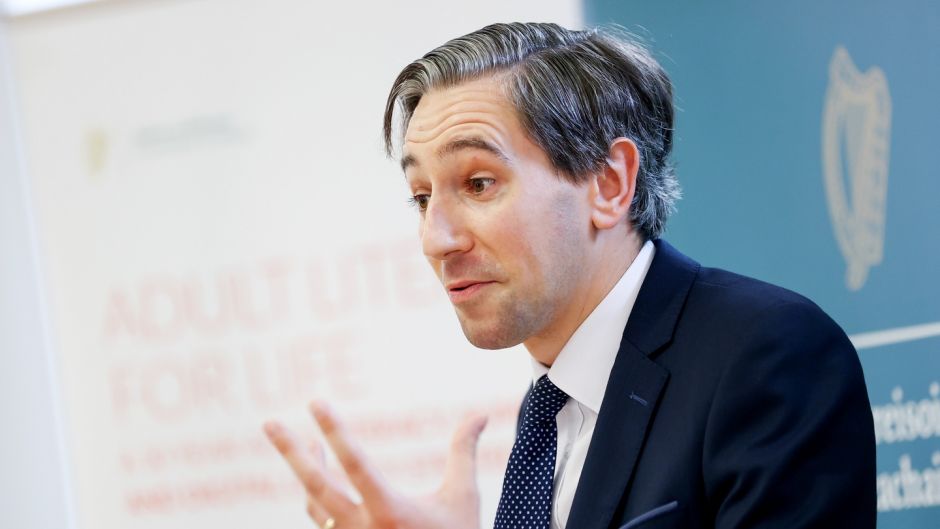 Minister for Further and Higher Education Simon Harris has announced the birth of a baby son.

Posting on Instagram, the Minister said he and his wife Caoimhe had on Wednesday “welcomed Baby Cillian into the world”. Cillian is the couple’s second child, they also have a daughter Saoirse.

“Caoimhe and baby doing great and Saoirse delighted to be a big sister and looking forward to meeting him soon.”

Mr Harris thanked all of the staff at the National Maternity Hospital in Holles Street, Dublin.

The Fine Gael TD said he will be taking paternity leave for a few weeks to “get to know this new little man”.

In a previous post he said Tánaiste Leo Varadkar would be taking any of his department’s business to Government during the time while Minister of State Niall Collins would be carrying out his day-to-day work in the department and Labour leader Alan Kelly would be providing a pair for Dáil votes.

Macron was left furious by Australia’s decision last week to ditch a 2016 deal to buy diesel submarines from France in favour of nuclear-powered ones from the United States and Britain.

After a cabinet meeting, government spokesman Gabriel Attal made clear French anger had not abated with an unusually frank statement of Macron’s expectations from the scheduled conversation with 78-year-old Biden.

The exchange would be an opportunity to “clarify both the way in which this announcement was made and the way for an American re-engagement in its relationship with an ally,” Attal said.

Paris was particularly outraged that Australia negotiated with Washington and London in secret, which French Foreign Minister Jean-Yves Le Drian denounced as “treachery” and a “stab in the back”.

French officials were notified about the loss of the contract just hours before Biden unveiled the new AUKUS security and defence partnership between the three English-speaking countries.

Macron was expecting “clarifications about the American decision to keep a European ally outside of fundamental talks about cooperation in the Indo-Pacific,” Attal added, without giving the schedule time for the exchange.

“We expect our allies to acknowledge that the exchanges and consultations that should have taken place did not, and that this poses a question about confidence, which all of us need to draw conclusions about now.”

The submarine row has plunged Franco-US ties into what some analysts view as the most acute crisis since the US-led invasion of Iraq in 2003, which Paris opposed.

After four years of tumultuous relations with ex-president Donald Trump, the spat has also dashed hopes of a complete reset under Biden, who took office in January aiming to rebuild frazzled ties with Europe.

As the row drags on, observers and some of France’s European partners are wondering how and when the French leader will call an end to the face-off, which is playing out just seven months ahead of presidential elections.

British Prime Minister Johnson said it was “time for some of our dearest friends around the world to ‘prenez un grip’ (get a grip)” in comments in Washington that mixed French and English.

“‘Donnez-moi un break’ because this is fundamentally a great step forward for global security,” he told Sky News.

Danish Prime Minister Mette Frederiksen, whose country is staunchly pro-American, defended Biden as “very loyal” and warned against turning “challenges which will always exist between allies into something they should not be.”

Attal said that France and the US needed to begin a process “to create the conditions for confidence to be restored”.

As well as an acknowledgement of French interests in the Pacific region, the process should include “full recognition by our American allies of the need to boost European sovereignty as well as the importance of the growing commitment by the Europeans to their own defence and security.”

This latter point is a source of tension between Biden and Macron, who has pushed hard during his four-and-a-half years in office for Europeans to invest more in defence and pool resources in order to increase their joint military capabilities.

The US, and some EU members including Denmark and Baltic countries, see this as a potential challenge to NATO, the US-led transatlantic military alliance that has been the cornerstone of European defence since World War II.

French Defence Minister Florence Parly argued against the idea of France withdrawing from NATO command structures, which some politicians in France have suggested in the wake of the submarines snub.

“Is it worth slamming the door on NATO? I don’t think so,” she said, while adding that “political dialogue is non-existent in NATO.”

Australia’s decision to order nuclear-powered submarines was driven by concern about China’s commercial and military assertiveness in the Pacific region, where Biden is seeking to build an alliance of democratic states to help contain Beijing.

‘Deviance and morality’: The history of the same-sex marriage movement in Switzerland

How a Dublin house sold for €13.25m but stayed under the radar