At least €85.2 million was spent on street cleaning and litter management by local authorities across the State this year.

The largest chunk was spent in the greater Dublin area, where €36 million was expended by the four local authorities in the county cleaning up during the pandemic.

Just over €23 million was spent to keep the streets of Dublin city clean, as lockdown measures meant more people were eating and drinking outdoors.

Outside of Dublin, Cork and Limerick had the next highest levels of spending on street cleaning and litter management.

Next highest was Galway, with local authorities in the city and county spending at least €2.4 million combined. Galway City Council spent €1.5 million as of September 30th and Galway County Council spent €880,000 as of November 15th.

The county with the lowest spend was Leitrim County Council at just over €164,000 as of October 15th.

Last year (2020), street cleaning cost all the local authorities more than €92 million, a slight increase on 2019.

Among those helping to clean up Dublin’s streets are Crumlin Community Clean Up, one of dozens of volunteer litter picking groups across the country.

Dublin City Council provides litter picking sticks, gloves, bags and hoops to the group, which meets weekly. Volunteers then go out to pick the rubbish and leave their bags at a designated drop-off point, which the council then collects.

During the first Covid lockdown in 2020, the group was picking up 80-90 bags of rubbish a week. Changes brought about by the pandemic actually helped their cause, according to one volunteer, Olga Tiernan.

Usually, the group meets at a central location and spreads out. However, during lockdown, equipment and bags were dropped outside people’s homes at a time that suited them, and they stayed within their own area to pick up litter.

Ms Tiernan said this resulted in the group covering more ground. “We were getting 70-80 bags, we had a high of 90 one time. We were covering the entire village of Crumlin all the way up to Dolphin’s Barn.”

She said nitrous oxide canisters (often referred to as laughing gas) are very common. “We have noticed much bigger, industrial cans lately. They are bigger than an average spray can, so that’s worrying.”

The group picks up a lot of bottles and cans and she feels a deposit return scheme could really help. “It’s a way for people to earn a few quid. Currently, its money people are throwing on the ground.”

The introduction of such a scheme is part of the Government’s Waste Action Plan.

According to the National Litter Pollution Monitoring System, a fifth of litter last year (2020) was packaging items such as bottles, beverage cans, cups and wrappers, while just under half of all litter was cigarette butts.

Ms Tiernan, a native of Connemara, said she always noticed litter around Dublin city in general, not just in the Crumlin area.

“There’s no bins in Connemara, but there’s no litter. It’s a very different mentality, you just keep it, your litter is your problem.”

However, she thinks that many people have other serious issues in their life, and litter is the last thing on their mind. “It’s my priority to have clean streets, but it’s not theirs.”

Grosvenor has announced that designer retailer, Tessuti, has opened its new global flagship store at Liverpool ONE, demonstrating the brand’s ongoing vote of confidence in the destination. The new location on Paradise Street follows Tessuti’s consistently strong performance at Liverpool ONE and spans two floors measuring 22,000ft². Boasting Tessuti’s biggest store to date, this is four times the size of the previous Liverpool ONE site. The store interiors have been styled with a subtle nod to classic Italian architecture whilst incorporating state-of-the-art technical features, combining classic design with an industrial-chic colour palette and cutting-edge digital screens. Working with local Liverpudlian digital and production agency Liquid, the new Tessuti store has exclusive instore stills and videos showcasing exciting campaigns; the first of which is rumoured to feature Liverpool stars Stephen Graham, Abbey Clancy, Miles Kane and Chelcee Grimes.

Alison Clegg, Managing Director, Asset Management, Grosvenor, commented: “Tessuti’s commitment to Liverpool ONE, through its relocation within the destination and decision to make the new store its global flagship, strengthens our position as one of Europe’s leading retail and leisure destinations. The impressive growth trajectory of Tessuti within Liverpool is a great indication of the potential for success and expansion of other brands that join Liverpool ONE.”

Chris Rowan, Director of Brand & Customer Connection at Tessuti, added: “The opening of our global flagship at Liverpool ONE is a huge moment for us. Liverpool is an urban hub for international fashion retailers, so upsizing and relocating within the city’s leading retail and leisure destination was a natural next step. We feel confident that it is the ideal home for our flagship location, and are excited to offer Liverpool ONE’s visitors our most stylish project yet.”

What you need to know about having a home swimming pool

This summer, it’s not just sales of rosé wine and ice cream that have rocketed during the heatwave. Interest in swimming pools has also surged.

There is something incredibly glamorous about a Hockney-blue pool. But how does the reality match up to the imagery? 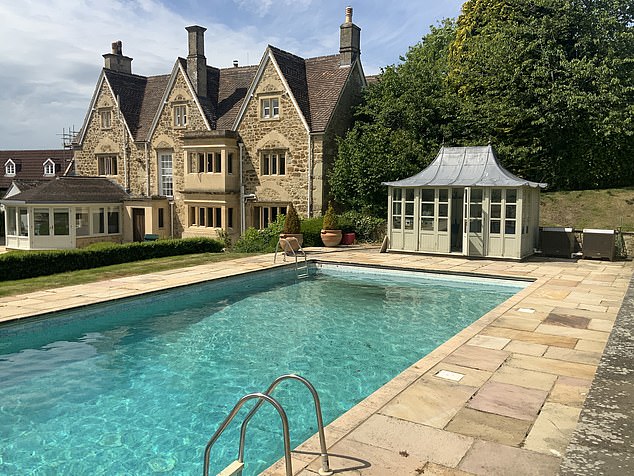 Refreshing: Church House in Potterne, Wiltshire, is on sale for £1.95m. Interest in swimming pools has surged with the hot weather

‘It’s been wonderful to be able to take a swim at the end of a long day,’ says Felicity Cooper, 55, who in 2006 installed a 12m x 6m pool outside her country house in Potterne, near Devizes, Wiltshire.

‘It has also been great for the children, Lily and Ryan, who learnt to swim here.’

Felicity stresses the importance of finding the right setting for a new pool.

She ensured hers was west-facing to catch the evening sun; then she went to the trouble of digging out a mini-amphitheatre so that the displaced earth formed a windbreak around the pool itself.

‘The pool is the optimum distance from the house, being not so near that it detracts from the garden and not so far away that anyone in trouble would not be heard by those inside.

‘It is far from trees so few leaves blow into the water and, with the children in mind, it has a top quality safety cover. Felicity’s six-bedroom Jacobean stone house standing in 1.7 acres is for sale for £1.95 million.

Opinions vary as to whether an outdoor pool helps or hinders a house sale. Some think that the hassle of maintenance may be off-putting to buyers. However, the property buying agent, Jonathan Harington, disagrees.

‘I have had many clients come to me with a pool on their wishlist of luxuries,’ he says. ‘But I have never had anyone say they wouldn’t buy a house because of the pool. If they felt strongly they could easily fill it in anyway.’

Yet owning a swimming pool is an expensive hobby. An above-ground pool — like a giant paddling pool — costs from £1,500 to £15,000. These pools may not quite cut it in terms of glamour, but their lower water capacity means maintenance costs are more reasonable.

For those looking at a more substantial in-ground pool, one with a liner finish of PVC will cost about £75,000. A concrete pool, finished with mosaic tiles, marbled plaster or paint will be about £125,000.

Larger projects can easily cost hundreds of thousands of pounds.

You may opt for an infinity pool — a pool designed with an edge that gives the illusion that the water is overflowing.

Those who want to improve their fitness may have a counter current device installed; the equivalent of swimming on a treadmill.

Many pool owners are interested in sustainability and heating the pool with solar panels is popular, as are covers that help heat retention.

Maintaining an outdoor swimming pool is expensive. The cost of heating and chemicals has increased so buyers should budget for at least £8 to £10 a day, dependent on the weather, according to SPATA.

Anyone fancying a workout in their own home may be interested in Ivy Cottage, Grendon, Northamptonshire.

Outside, the four-bedroom cottage is a 10m x 5m pool neatly positioned in the north-west corner to catch the sun.

‘After swimming in the pool, you could go running, riding or cycling on the countless trails nearby,’ says Ian Denton, of Jackson Stops. ‘It’s a lifestyle amenity in your own garden.’ Ivy Cottage is for sale for £825,000.

On the market… splash out

Radisson Hotel Group has launched its latest Greek resort in Skiathos. Skiathos, the westernmost of the Sporades islands, is known for its stunning coastline of more than 60 beaches with soft sand and clear blue waters, as well as sea caves, impressive rock formations, and hiking trails on the tree-covered hills along the north shore made famous as the location for the filming of Mamma Mia. The island’s Byzantine churches and monasteries, Venetian-style Bourtzi fortress, and Papadiamantis House with its typical architecture are important parts of the island’s rich history.

The resort’s 84 rooms and suites are decorated in a modern, minimalist style, and most of them offer views of the hotel pool or the sea. Private balconies or terraces are available in select rooms, and the resort’s biggest suites feature private whirlpools for ultimate privacy and relaxation. The resort is ideally suited for weddings with its own on-site orthodox chapel and versatile outdoor pool area that offers receptions with stunning views. The main all-day dining restaurant celebrates Greek and Mediterranean flavors on its lunch and dinner menus. The poolside bar offers breakfast treats and late-night snacks as well as a wide selection of drinks and an extensive wine list. For guests looking to keep up their fitness routine, a well-equipped gym is available.

“We are excited to offer our guests a fantastic resort experience on the beautiful island of Skiathos, as we continue to expand our Greek resort portfolio. Radisson Resort Plaza Skiathos allows guests to switch off and relax surrounded by stunning natural beauty,” said Yilmaz Yildirimlar, Area Senior Vice President at Radisson Hotel Group.

Exclusive or not, this is one Clubhouse I was happy to leave | John Naughton

Egypt: Excavating the archives of the man who uncovered Tutankhamun’s tomb | Culture