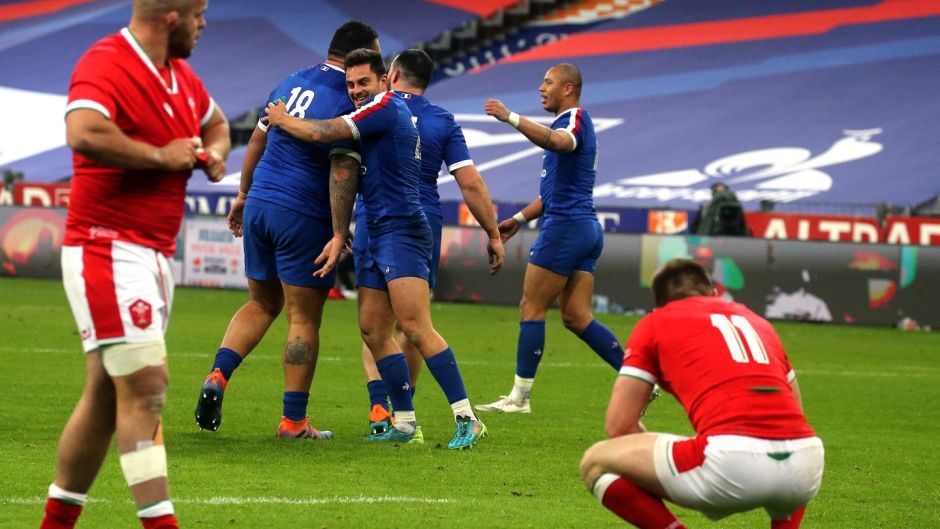 France denied Wales a second Six Nations Grand Slam in three years when Brice Dulin scored a stoppage-time try to give them a 32-30 home victory on Saturday.

Dulin dived over as France completed a remarkable turnaround to give Les Bleus the win and a bonus point that leaves them needing to beat Scotland on Friday with a bonus point and make up a 20-point deficit to top the standings.

Wales had the game firmly in hand but picked up two yellow cards in the finale and were left them exposed to France’s late fury.

They lead the table with 20 points with France in third place on 15.

Ibanez told BBC1: “It was an incredible finish. It was a fantastic battle through the whole game. The battle was just immense, it was a massive effort.

“Credit to Wales, they fought until the end but the boys showed so much character.

“It’s going to give the boys so much confidence for the next game. We still have a chance to win the Six Nations and the next game will define our championship.”

All under one roof: Multi-generational living is the new normal

Could you struggle to get your hands on garden furniture?

Japanese knotweed is responsible for shaving £11.8billion off the value of Britain’s property market, new research by a removal specialist claims.

As many as 4 per cent of British homes are affected by the invasive plant – either on the property itself or on a neighbouring property.

The invasive plant makes homes significantly more difficult to sell as buyers can struggle to secure a mortgage on a property where it is found.

However, Britain’s biggest mortgage lenders told us that is possible to get a mortgage for a home affected by knotweed, but conditions may be imposed.

Japanese knotweed on a property reduces its value by an average of 5 per cent, according to the figures from removal specialist Environet.

It used that to estimate that with 890,000 households across the county are being hit by a typical reduction of value of £13,200 due to knotweed, this equated to £11.8billion in total.

The plant can be stopped from spreading – although this process can be costly, at around £2,500 for a 10sq m area for a herbicide treatment or £5,000 for a 10 sq m for an excavation.

Environet claims that removing the root system from the ground is the only way to deal with Japanese knotweed decisively with minimal change of regrowth.

It said that despite the lower costs, herbicide treatment is increasingly recognised as a control method only.

This is because above-ground growth can disappear, but the root system beneath the ground is often induced into dormancy meaning it’s capable of regrowing in the future – particularly if the ground is disturbed by landscaping or building work. 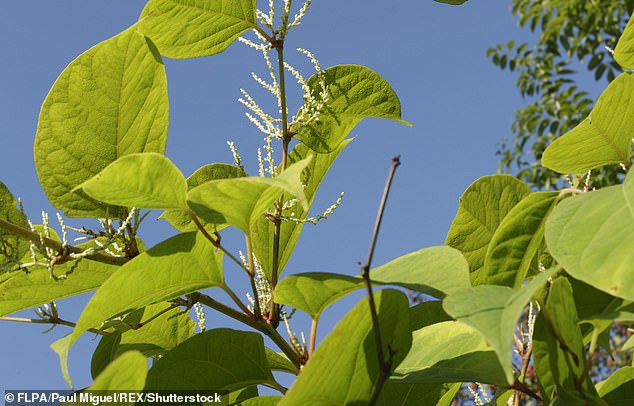 Nic Seal, of Environet, said: ‘Those buying and selling property are legally required to declare if the property is or has been affected by Japanese knotweed, but if an infestation has been professionally excavated with an insurance-backed guarantee to satisfy mortgage lenders, it is possible to restore the property value to close to the original value.’

He added: ‘Herbicide treatment of knotweed has always been very popular due to the lower costs, but the message is getting through that it’s only a control method and won’t solve the problem definitively.

‘Buyers are much more wary of buying a property which still has knotweed rhizome beneath the ground as there’s no way of knowing whether it’s completely dead. There’s also an environmental cost to using chemicals, which is of growing concern.’

Environet explained that the excavation element can be carried out during the winter months, allowing for full use of gardens during the summer.

What mortgage lenders say about knotweed

Mortgage broker SPF Private Clients, explained that those buying a property where Japanese knotweed is found may find it less of a deal breaker than in the past where the lender may have automatically declined a mortgage application.

SPF Private Clients’ Mark Harris, said: ‘Should Japanese knotweed be identified, there are four categorisations assessing its severity, with 1 being best-case scenario and 4 being worst-case.

‘Depending on which silo the property falls into, and whether there is specialist eradication work either ongoing or planned, and insurance in place, lenders may be willing to consider the application.

‘Depending on the severity of the problem, lenders may tailor the amount they are prepared to lend, or not lend at all.’

While securing a mortgage on a property with knotweed can remain challenging, lenders confirmed that they are open to providing finance if a management plan is in place.

A Nationwide Building Society spokesman said: ‘Our policy on Japanese Knotweed depends on how far the plant is from the property. If it is less than seven metres away from the property, we would request a specialist report about eradicating it before deciding whether we could lend.

‘If the plant is more than seven metres away, we would need written confirmation from the borrower that they want to proceed with their mortgage application despite the presence of the plant.

‘What may be required is assessed on a case by case basis. Where the valuer identifies the presence of Japanese Knotweed, they may advise that a specialist report is required with respect to eradicating the plant and, where applicable, to report on repairing the property. Any report for eradication of the plant should include an insurance-backed 5 year warranty against re-infestation.’

And spokesperson for Halifax explained: ‘The presence of Japanese Knotweed itself is not a barrier to lending.

‘We will be guided by the surveyor’s, and any subsequent expert’s, report on the scale, location and effects of any presence on or around the property.’

How were the figures calculated?

Official figures from the ONS show there at 27.8million households in Britain.

Environet disregarded 20 per cent of households that are flats as these are less likely to be affected by knotweed.

Environet’s survey conducted with YouGov in 2021 revealed that around 4 per cent of homes are affected by knotweed, either directly – meaning that it grows on the property – or indirectly where a neighbouring property is affected.

It means 889,600 homes are affected in total, according to Environet.

The average value of a property in Britain is £264,244, according to Land Registry’s figures for August.

Environet claimed that Japanese knotweed reduces the value of a property by 5 per cent on average. This is based on its own anecdotal evidence of what a property is worth once a knotweed management plan is in place (ie the 5 per cent reflects the amount that a buyer might try to reduce an asking price by due to the stigma and risk of the knotweed returning after treatment or removal).

The 5 per cent reduction translates into £13,212 being knocked off the average home. 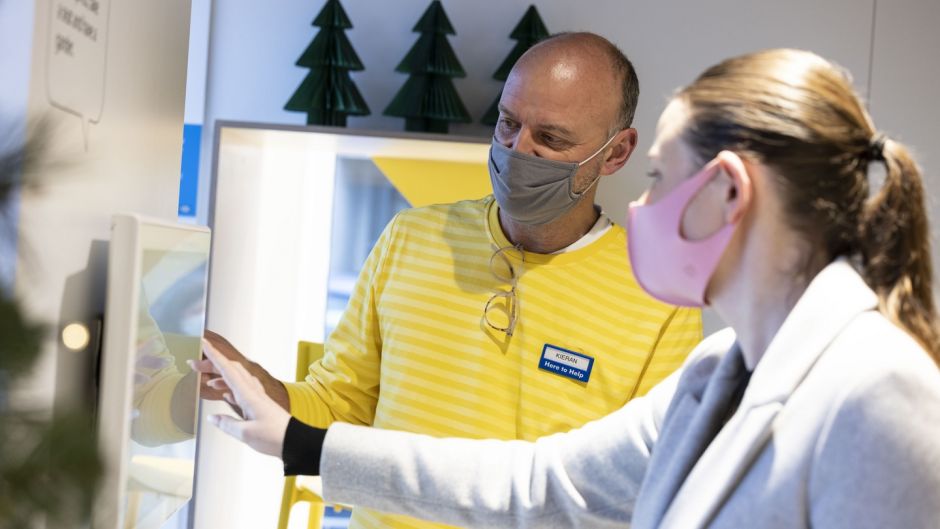 Ikea is piloting a home design service in Ireland. The Swedish furniture giant opened the new service in Naas on Monday.

Customers will be able to consult the retailer’s in-house home interiors specialists at the new store. The company said the service would be free, personalised and one-to-one.

It said people would be able to talk through ideas for upgrading their kitchen, living room or wardrobes with a designer. They will also be able to order any Ikea products from the store for delivery. Unlike Ikea’s other smaller store in Carrickmines, south Dublin, there will be no items available on site to bring home on the day.

The company said Ireland was one of eight markets worldwide in which it is piloting the new service.

“This new service allows us to bring our home furnishing expertise to the many, with bespoke design solutions that best reflect our customer’s unique style and design challenges,” said Martyn Allan, Ikea’s market manager in Ireland. “At the same time, we get the opportunity to listen to and learn from our customers to continue to develop our store formats.

“We are so proud that Ireland is part of this pilot, offering us the opportunity to move closer to our customers in towns and cities currently without IKEA stores,” he added.

People looking for a design consultation will need to book in advance online. When the company confirms the booking, it will let the customer know what to bring with them, such as measurements or photographs.

Over one or two consultations – which will not cost anything – the designer will draw up a 3D plan which will be accessible on the Ikea website to the customer up to five days after the consultation.

The store on Naas Main Street will feature some room sets and the company says the consultations will operate in strict compliance with current public health guidelines.

Dubs get exercised over digital dollars

Dubliners are to be “paid” for a walk in the park with “civic dollars” they can cash in for coffee and cake and other goods and services, in an effort to encourage outdoor exercise.

Visitors to five parks in the Dublin 8 area can earn the community currency if they sign up for a new smart phone app to allow Dublin City Council to track their park use.

The scheme is being piloted in the area from the Liberties to Inchicore, following research by the council’s Smart D8 team which found just 40 per cent of local residents took regular exercise, but 92 per cent said they would use a park for exercise if it was available to them.

Visitors to St Audoen’s Park, St Patrick’s Park, Weaver Park and Oscar Square in the Liberties, and Grattan Park in Inchicore who use the app will be rewarded with civic dollars for every 30 minutes they spend in the park up to a limit of 5 dollars a day.

The system uses GPS data and allows users to opt in once they enter a park. Their data is anonymised, and a user’s session will end automatically once they walk out of the park. Data gathered will be used by the council to analyse park usage and allow for future planning and infrastructure improvements.

The dollars can be cashed in for discounts in a number of local businesses including Little Bird cafe, the Bike Hub, Mobility Genie, the Digital Hub and Epic Ireland. The dollars can also be donated to community organisations for more expensive services including marketing or IT advice and legal consultations, with participating companies including Core Tech IT, Paul Saxon Consulting, Éire Graphic Design and VAVA Influencers.

The Smart D8 project was established earlier this year to investigate innovative approaches to improve citizens’ health and wellbeing in Dublin 8, with the involvement of St James’s Hospital and the Digital Hub.

The civic dollars pilot will run for five months, with the aim of attracting 1,000 users in the first two months, and could be rolled out to other parks in the city if successful.

The scheme had the potential to “improve the health and wellbeing of our citizens”, Lord Mayor of Dublin Alison Gilliland said.

“We need to encourage increased use of our parks, and the civic dollars project will do that while having the added benefit of contributing to local businesses and community organisations.”