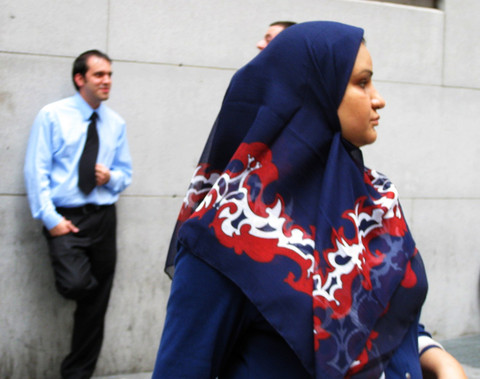 Two German firms were fine to ban Muslim women from wearing headscarves, the EU court has said, in a ruling which alarmed rights groups.

“A prohibition on wearing any visible form of expression of political, philosophical, or religious beliefs in the workplace may be justified by the employer’s need to present a neutral image towards customers or to prevent social disputes,” the court said in a ruling on Thursday (15 July).

A “neutral image” was a “legitimate aim”, it noted, even if it caused “particular inconvenience for such workers”, the tribunal said.

It was even more legitimate if “in the absence of such a policy of neutrality, [a company’s] freedom to conduct a business would be undermined,” it noted.

But company policy must be applied “without distinction” to one faith or another and “treat all workers of the undertaking in the same way”, the EU court said.

The fact one of the German firms also “required an employee wearing a religious [Christian] cross to remove that sign” was a good indication, it noted.

And companies should beware of introducing special criteria, such as banning only “wearing [of] conspicuous, large-sized signs” of belief, as that could create discrimination because some faiths were “inextricably” associated with larger symbols than others, the court said.

WABE, which runs daycare centres in the city of Hamburg, officially warned and temporarily suspended a woman named as IX from her duties.

Müller Handels, a pharmacy chain in Nuremberg, first transferred to another post then sent home a woman named as MJ.

Thursday’s EU verdict came on top of a similar one in 2017, when G4S, a British security firm, fired a Muslim woman in Belgium named as Achbita for also insisting on wearing her veil.

And the EU court rulings had “far-reaching implications” for other women like them in Europe because they opened the door to Islamophobia “masquerading as neutrality”, the Open Society Justice Initiative, an international NGO, warned.

“Laws, policies, and practices prohibiting religious dress are targeted manifestations of Islamophobia that seek to exclude Muslim women from public life or render them invisible,” the NGO’s Maryam H’madoun said.

“Discrimination masquerading as ‘neutrality’ is the veil that actually needs to be lifted,” she added.

“A rule that expects every person to have the same outward appearance is not neutral. It deliberately discriminates against people because they are visibly religious,” H’madoun also said.

The German courts are free to apply Thursday’s EU ruling as they see fit in the specific cases of IX and MJ.

Meanwhile, several EU states, including Austria, Belgium, Bulgaria, Denmark, France, Germany, Latvia, and Luxembourg, have put in place restrictions of one form or another on Islamic veils in public life.

The laws were mostly enacted in the past 10 to 15 years, among a rise in right-wing sentiment in Europe.

And ‘burqa bans’ have become rallying cries for far-right parties, such as the Rassemblement national in France and the PVV party of Dutch racist Geert Wilders.