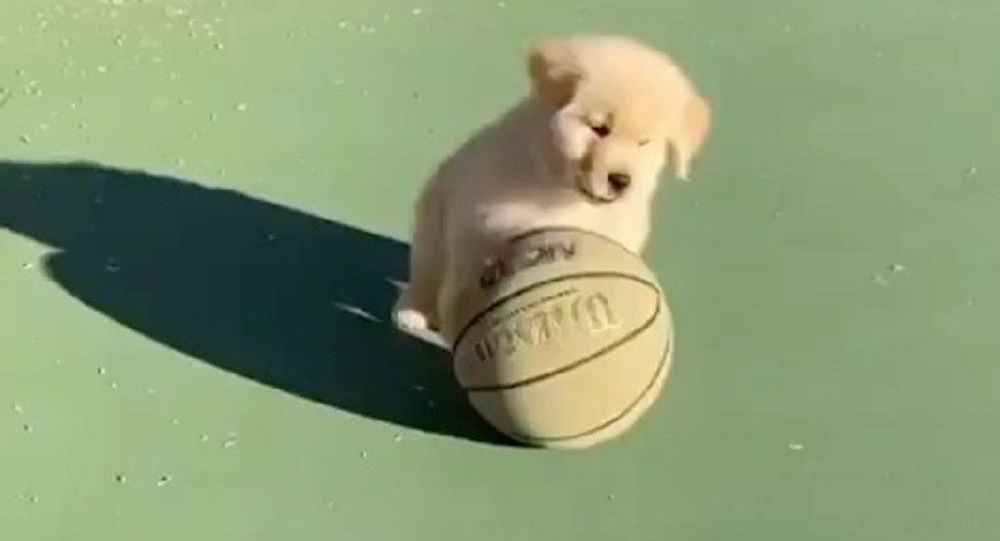 Doggos love to play fetch, bringing some rubber balls to their clumsy human friends – and some canines are extremely talented at that. But what if the ball is too big – bigger, in fact, than the puppy itself? Well, this puppy demonstrates that that’s not necessarily a problem!

This tiny golden retriever pup is definitely a future basketball star. Just look at it playing with a basketball as if it’s already an NBA pro! Well, this little guy will surely become the next Air Bud – as soon as someone creates a canine version of the NBA, of course. 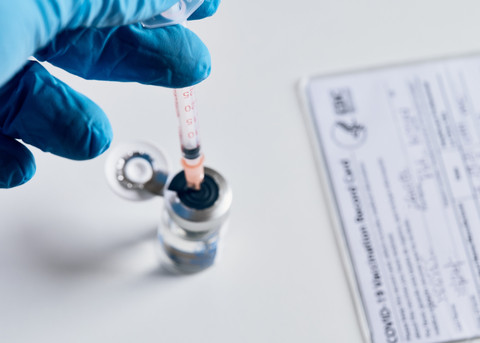 The surge in Covid-19 cases due to the spread of the more contagious Delta variant has prompted a debate in Germany over whether people who have not yet been vaccinated should face restrictions – after other countries like France and Greece made similar moves.

If infections continue to rise, unvaccinated people might be forbidden from entering restaurants, cinemas, theatres or sports stadiums because “the residual risk is too high,” he said.

Merkel has previously spoken out against making vaccination itself mandatory.

According to Braun, cases are increasing by 60-percent per week and are expected to continue rising.

“If the Delta variant were to continue to spread at this rate and we don’t counter it with a very high vaccination-rate or change in behaviour, we would have an incidence of 850 [cases per 100,000 inhabitants] in just nine weeks,” he said.

Braun argued that introducing further restrictions for unvaccinated people would be legal since “the state has the responsibility to protect the health of its citizens” – triggering a debate even within Merkel’s Christian Democratic Union (CDU) party.

The CDU candidate to succeed Merkel as chancellor in September’s national elections, Armin Laschet, has opposed such measures.

“We have had a rule that you must be tested, vaccinated or recovered and I think that is a good principle,” Laschet said.

For his part, the leader of the Social Democratic Party, Rolf Mützenich, warned that politicians are not going “to change the vaccination behaviour of individuals with threats”.

About 60 percent of Germany’s 83 million people have received at least one dose of a Covid-19 jab, while just 48 percent are fully-vaccinated.

All jabs approved in the EU – BioNTech/Pfizer, Moderna, AstraZeneca, and Johnson&Johnson – appeared to be effective against the Delta variant when both doses are administrated in the case of two-shot jabs.

Other countries like Italy, France, and Greece are trying to increase vaccination rates by imposing vaccine passport schemes or mandatory vaccination for certain workers, such as health and care staff.

Those moves have sparked protests over the weekend.

Thousands gathered on Saturday in several French cities to speak out against the new Covid-19 restrictions for unvaccinated people and mandatory vaccination – with far-right activists and members of the ‘Yellow Vest’ movement clashing with police in Paris.

Similar rallies took place outside the Greek parliament in Athens for the third time this month, while large crowds took the streets in Dublin to protest against the introduction of vaccines passports.

As part of a so-called “Worldwide Rally for Freedom” campaign, protest against vaccine passports, wearing masks, and further lockdowns were organised in major cities across the world, including Sydney, London or Rome.

The Syrian government has repeatedly accused Israel of conducting regular airstrikes on its territory, calling on international organizations to denounce the attacks as violations of Syria’s sovereignty and introduce sanctions against the Jewish State.

Syrian air defense systems have destroyed two missiles fired by the Israeli F-16 fighter jets toward facilities in the Damascus region, Rear Adm. Vadim Kulit, the deputy head of the Russian Center for the Reconciliation of Warring Parties in Syria, said on Sunday.

This comes just after Russian-made Buk-M2E air defense systems downed all the rockets launched at the central Syrian province of Homs in the early hours of Thursday. The Russian military added that two Israeli F-16 fighters fired four guided missiles at several facilities in the Homs province. Syrian state media also attributed the strikes to the Israeli military, which never denied nor assumed responsibility for the attack.

According to the official, in the early hours of Sunday, two Israeli F-16 fighter jets conducted an airstrike against facilities in the Set Zaynab settlement, south of Damascus, without entering the Syrian airspace.

On Monday, state-run Al-Ikhbariya TV reported that the Syrian air defense was repelling an air attack from Israel on the Syrian city of as-Safira in the Aleppo Governorate. The Russian military confirmed later that seven missiles fired by Israeli F-16s at Syria were destroyed by the Pantsir-S and Buk-M2 systems of the Syrian air defense.

While Israel avoids commenting on foreign reports, as it says, in December, IDF Chief of Staff Lt. Gen. Aviv Kohavi did acknowledge that the Jewish State had conducted numerous attacks on Syrian territory to counter what he called Iran’s “retrenchment” in the Arab Republic.

It is also reported that Israel uses Lebanon’s airspace to launch strikes against Syria, while some of the rockets are launched from the occupied Golan Heights, captured by Israel in the 1967 war.

Jehan Sadat, who has died aged 88 of cancer, spent most of her life promoting social justice and women’s rights in Egypt. She continued to campaign decades after her husband, President Anwar Sadat, was assassinated, on 6 October 1981, by militants in the army avenging the imprisonment of fellow Islamists and condemning the 1978 Camp David accords that he had signed with Israel.

As a girl in Cairo, Jehan had explored the streets of her neighbourhood of Al-Manial, attributing her self-confidence to her supportive parents. She said that her fight against gender inequality started during her schooldays, when she was encouraged to focus on subjects such as sewing and cooking in preparation for marriage rather than the sciences that would lead to a university career. “I have always regretted that decision. I would never allow my daughters to close off their futures that way,” she wrote in her autobiography, A Woman of Egypt (1987).

Jehan had married Sadat in 1949 at the age of 15; a former army officer, he was twice her age and active in the fight against British control in Egypt. Three years later, he was a key player in the military coup that toppled King Farouk and later brought Gamal Abdel Nasser to the presidency. Sadat took a series of senior positions in the government and after Nasser’s death in 1970 was elected president.

Jehan had begun her work for women’s rights in the years before she became first lady. She was vocal in condemning female genital mutilation and played a crucial role in the 1960s in the formation of a co-operative in the village of Talla in the Nile Delta that helped local women become skilled in sewing and therefore economically independent of their husbands.

She also headed SOS Children’s Villages, an organisation that provides homes for orphans in a family environment. In 1975 she led the Egyptian delegation to the UN international conference on women in Mexico City and to the 1980 conference in Copenhagen.

Most crucially, she was involved in a campaign to reform Egypt’s status law that would grant women new rights to divorce their husbands and retain custody of their children. The 1975 film Oridu Hallan (I Want a Solution), starring Faten Hamama, illustrated the struggles of Egyptian women under a conservative legal system that suppressed their rights.

“Over half our population are women, Anwar,” she told her husband, as she recorded in A Woman of Egypt. “Egypt will not be a democracy until women are as free as men.”

The attempts of some liberal clerics to defend the limited legal amendments supported by Jehan were undermined by the growing influence of Wahhabi Saudi Arabia. Despite the backlash from conservative Muslims, in the summer of 1979 her husband granted her wish and issued decrees improving the divorce status of women, as well as a second law that set aside 30 seats in parliament for women. These measures, which were later passed through parliament, became known as “Jehan’s laws”.

She was born Jehan Raouf in Cairo, into an upper-middle-class family, the third child of Safwat Raouf, an Egyptian surgeon, and his wife, Gladys Cotrell, a British music teacher, who had met in Sheffield when Safwat was studying medicine at the university. Jehan was raised as a Muslim, according to her father’s wishes, but she also attended a Christian secondary school for girls in Cairo.

She met Anwar at a summer party at her cousin’s house, not long after he was released from prison for the second time for his revolutionary activities; he was also recently divorced. The idealistic Jehan was impressed, despite her mother’s initial misgivings and the 15-year age gap. They married the following year, and went on to have four children.

In 1977 Anwar flew to Jerusalem to propose a peace settlement to the Israeli Knesset, and the following year he signed the Camp David accords, the first peace treaty between an Arab nation and Israel, with the prime minister Menachem Begin and the US president Jimmy Carter. Jehan, who was a far more visible first lady than President Nasser’s wife had been, later made a point of saying that she had stood by her husband even though the peace agreement was highly controversial in Egypt.

While he had believed that the affection of the armed forces for him was such that they could not be infiltrated by militant Islamists, she later told the BBC: “I knew that he would be killed.” She begged him to wear a bullet-proof vest but he refused, and was proud of the new uniform that he had had designed for a military march-past on the outskirts of Cairo.

When people were looking up at the Egyptian air force planes flying in formation and doing aerobatics, Jehan noticed an army truck pulling out of the line of artillery vehicles and stopping in front of the reviewing stands. Then she saw soldiers with machine-guns running towards the stands. Her husband stood up, was riddled with bullets, and fell. The glass through which she and her grandchildren were watching was likewise splintered by bullets, and her bodyguard pushed her to the ground.

Jehan spoke of the shock of losing the man who was not only “my beloved husband whom I loved all my life, but … my partner”.

Her aspiration to higher education had eventually been realised, with a BA (1977) in Arabic literature and an MA (1980) in comparative literature at Cairo University, and she followed these with a PhD (1986). In later years she was a visiting professor at several US universities, and continued to promote international peace and women’s rights. A second book, My Hope for Peace, followed in 2009.

She is survived by her three daughters, Lubna, Noha and Jehan, her son, Gamal, and 11 grandchildren.

For a true display of wealth, dab printer ink behind your ears instead of Chanel No. 5 • The Register